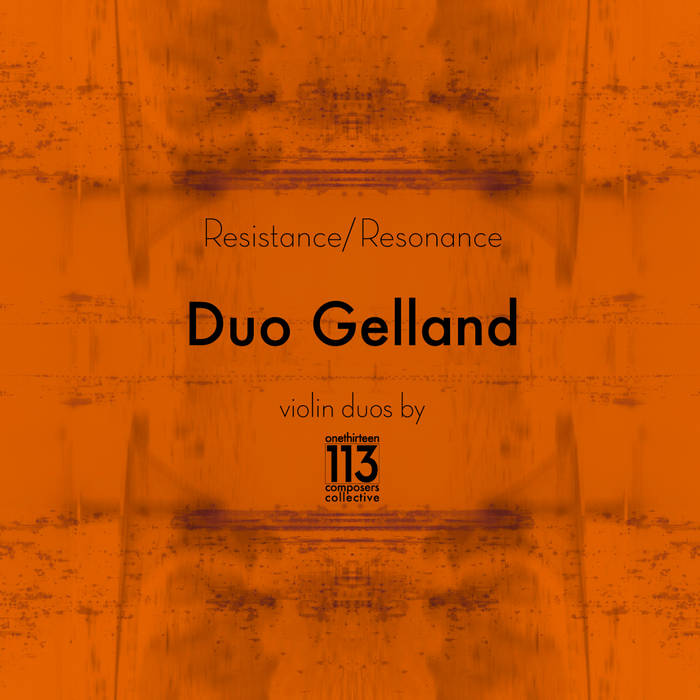 Resistance/Resonance is an album of violin duets written by composers of the Twin Cities-based 113 Composers Collective. These 6 pieces provide ample field for Duo Gelland (Cecilia and Martin Gelland, violinists) to display their wide-ranging voices, from pure noise to the luminous ringing of harmonics. Swedish-German Duo Gelland was formed in 1994; since then more than 200 works have been dedicated to the ensemble. They have worked with filmmakers and choreographers as well as composers, and enrich that work with scholarship and research into historical lost repertoire. Their long collaboration is obvious on this cd, in the way they match tone color and balance, and their synchronized interaction across complex rhythmic structures.

The album opens with Jeremy Wagner’s Oberleitung. This is the German word for “overhead lines,” the kind that carry electricity. It is perfectly descriptive of the skittering, arachnid energy of much of the music. Wagner takes advantage of the violins as much for their percussive attacks as for pitch. After a brief opening incantation, crackling battuto and drop-bow gestures are batted back and forth between the instruments in shaped, fast-moving volleys, as if they are playing a game, creating virtuosic swarms. Wagner gives each of them room to breathe, allowing the series of gestures to speak for themselves inside the larger form.

In contrast, A Lifeless Object, Alive (Dysarthria) by Michael Duffy opens with full-throated double stops, shadowed by soft, porous wisps of sound. This gesture happens many times in the piece: it is as if the long, noise-laiden tones charge the air with sound, and the high, quiet resonances are the afterimage, or the dust settling. The emphasis here is on the grain of the sound, on the continuous morphing and layering of timbre. Layering these tones in separate registers (one violin playing very high, the other much lower) brings an additional degree of depth to the mostly slow-moving lines. Keening, slow glissandi give the piece an air of sorrowful remembrance.

Autochrome Lumière by Joshua Musikantow is a work infused with nostalgia. Fittingly, a more traditional, melodic style of playing is often in the fore here. The music meanders slowly, talking outside of time. The end of the first movement seems to slide up and away, pianissimo, like a memory vanishing. In the second movement, one violin takes the melodic foreground while the other slides in and out of the background with multiple commentaries, whether a waltz beat, or pecking battuto bows, or tapping on the body of the violin. The final movement speaks vividly, in tangled, vexed phrases. It brings to mind the poem that accompanies Musikantow’s piece:

...I contemplate how the dramatic, percussive hang up
is not possible with mobile phones.
You need a landline.
You need a phone with weight; a phone with spiral cords you can twirl
anxiously;
a phone you can hold in the nook
between
your head and your collarbone,
almost as if playing the violin.

Sam Krahn’s piece Resistance/Resonance starts with satisfyingly meaty scratch tones from one violin and microtonal ornamentation and double stops from the other. The music is pulled back and forth between these two poles; resistance and resonance, noise and pitch. Krahn cultivates engaging music that bridges the two, with gorgeous bent double stops and emotional friction between the two voices . The violins are both attracted and repelled by each other, sometimes standing apart playing without any regard for one another, and sometimes coming together, hovering just outside of consonance.

Difficult Ferns by Adam Zahller is highly microtonal, and heavily ornamented. The piece moves forward on tiny, highly specific changes in rhythm, pitch, and color. The two violins sometimes seem as two projections of the same image, shimmering and wavering through small differences in pitch or rhythm. Zahller creates shadowy, ghostlike images by asking the player to use harmonic touch in the left hand, transforming mid-range pitches into very high, unstable auroras of sound. Much of the music is very quiet, encouraging the listener to lean in and focus more closely on the changes, and saving the louder end of the auditory spectrum for intense moments.

The closing work on the recording, cistern . anechoic . sonolucent by TIffany M. Skidmore is inward-looking, understated. The music floats languidly, slowly moving like a jellyfish in calm water. Like the Zahller, it too explores the quiet range of the instruments, with only a few gestures stepping forward out of the shadows, only to recede again. The mood is one of soulful contemplation. The most arresting part occurs at the very end, when, having placed heavy mutes on the strings to further dampen the sound, the breathing of the two musicians become audible.

Certain musical elements run through the music of the 113 Composers profiled here: rhythmic complexity that creates a timeless, sliding, even atemporal environment; quarter-tone harmonies; very finely-grained manipulation of timbre and articulation via extended, sometimes virtuosic playing techniques. Much of this music is also laden with extra-musical associations: a Wittgenstein quote for the Wagner, the nostalgic poem for the Musikantow. Other warmly surreal poems and abstract drawings fill the accompanying CD booklet. Therefore, this is music of multiple complexities, not just in the score but between the music and the quotes, poetry, and images that accompany it. It is enigmatic, mysterious, but always gesturing toward new interpretations.