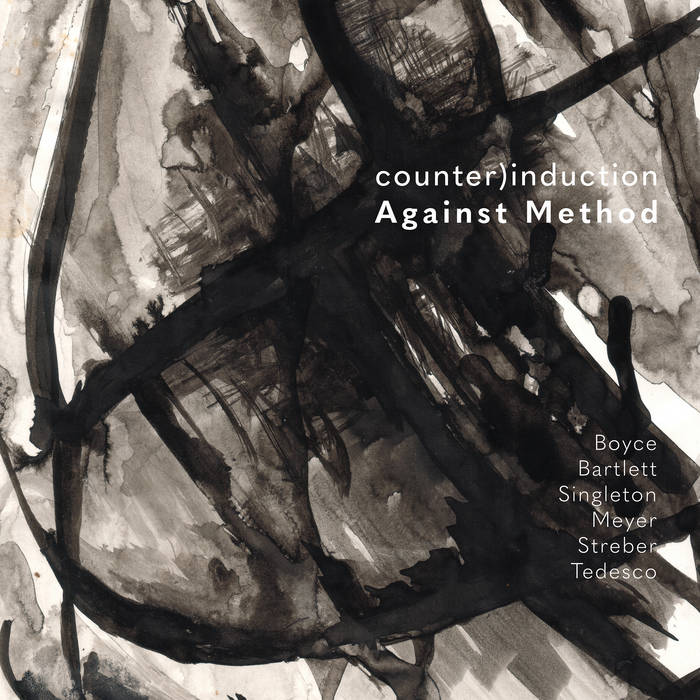 AGAINST METHOD celebrates a landmark anniversary for veteran New York new music ensemble counter)induction. Their two decades of musical life are a testament to their focused artistic vision, vibrancy of performances, and tenacity of spirit. This recording, featuring works by c)i’s member composers alongside music by two guests, captures the fundamental subversion at the core of the ensemble’s ethos -- the prioritization of substance over fashion, despite the existential pressures on a group of its kind in our contemporary landscape.

Douglas Boyce’s vigorous trio etude for clarinet, cello, and piano The Hunt By Night opens the program. Boyce writes that the piece, “is a modern caccia wherein the temporal orientations of the three musicians are bundled and re-bundled as the players shift roles from pursuer to pursued, from leader to outsider, from furious precision to savage confusion.” The virtuosity in this music is physical and mental, balancing the deft passagework with the vigilance needed to navigate the quickly shifting meters and shuffled motives.

A second trio, this time for bass clarinet, cello, and guitar, Kyle Bartlett’s Before is the expressive anthesis of the Boyce, swapping hardiness for delicate tactility and breadth of permutation for depth of examination. Bartlett’s music unfolds at the pace of an inner emotional dialogue, pausing when necessary to absorb the import of a certain expressive phrase, or digging in to an uncomfortable timbre to mine its essence. This balance between the poetic and visceral impulses binds together the sectional structure of Before.

Alvin Singleton’s Ein Kleines Volkslied was written for the Bang on a Can All-Stars in 1997 and is based on the Scottish folk song, “Annie Laurie.” Singleton establishes fixed vocabularies of musical material for each of the instruments in the sextet. The sparseness of the orchestration throughout much of the work gives way to density as Singleton merges the disparate threads together into a brief closing climax. The work’s gesture towards populism is subverted by an injection of complexity and abstraction. The balance between populism and modernism notwithstanding, the playful pun on Mozart in the title sets the tone for this lightly bittersweet piece.

Written for her husband Benjamin Fingland, Jessica Meyer’s Forgiveness captures the intimacy and intricacy of negotiating long term relationships. Using a looper pedal, Meyer begins with a range of breath sounds that merge with sustained melodic fragments. Bent notes and subtle ornaments enhance the expressive quality of the looped gestures as registral expansion opens up into a rich, modal texture.

Ryan Streber’s Piano Quartet engages reverently with its venerable instrumentation. A neoclassical strain underlies its shifts from a tranquil, harmonic haze to taut, contrapuntal episodes. The work is Haydnesque is its motivic economy -- developed from a short, six note melodic ideé fixe, Streber permeates the different characters of the work with this material, allowing it to drive the formal discourse. The dynamic interplay between the instruments alternates between interwoven passagework and ethereal suspensions, culminating in a rhapsodic climax.

Closing the program is Argentine composer Diego Tedesco’s Scherzo for clarinet, guitar, violin, viola, and cello, written for counter)induction in 2019. The “joke” of the piece is encapsulated in a simple descending chromatic scale, from which much of the melodic material for the work is drawn. Tedesco writes specific and colorful expression indications in the score -- “blues,” “burlesque,” “desolate” -- and his fluid, gestural writing allows the performers to inject the texture with these characters. The ensemble is sometimes treated as a hybrid unit and other times in subgroups, establishing interrelationships between the instruments and players that speak to the core of what is so unique and magical about chamber music.

And interrelationships are indeed at the heart of what counter)induction is about -- dialogue, both while making music as well as in the process of curation, is the driving force behind the ensemble. In this sense, counter)induction has always strived to be a microcosm of an idealized community, one in which consensus is arrived at through the free exchange of ideas and the delicate process of compromise. It is a formula that has helped the group endure for twenty years, and this celebration of that milestone is yet another manifestation of c)i’s commitment to its set of aesthetic principles.

This album is funded in part by The Alice M. Ditson Fund and the recording of The Hunt by Night partially supported by a grant by George Washington University. Ein Kleines Volkslied was commissioned by Bang on a Can as part of the National series of works sponsored by Meet the Composer/Arts Endowment Commissioning Music/USA, with support from the Helen F. Whitaker Fund.