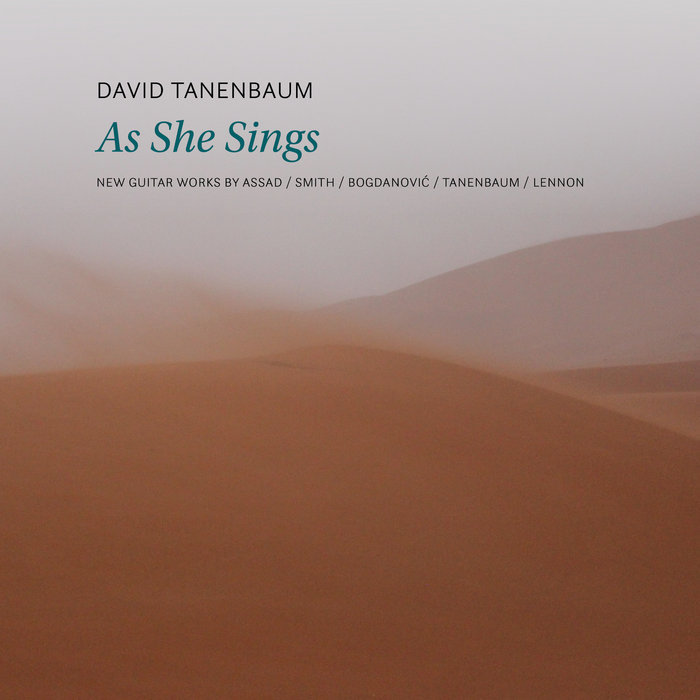 For the past five decades, guitarist David Tanenbaum has championed his instrument and ushered countless new solo and chamber works into the repertoire, enriching it with his curatorial acuity and powerful and sensitive performances. As She Sings documents several of those works, from an early piece written for him by his father, composer Elias Tanenbaum, to Dusan Bogdanović’s textural song cycle Games, to the most recent work in the collection by iconic Brazilian virtuoso Sérgio Assad.

More angular and modernist than most of Assad’s music, Shadows and Light features searching, snaking lines that explore increasing dissonance and tension over a series of dense repeated chords. In an energetic middle section, a rhythmic pedal point is embellished by guitaristic fills and accented chords that are more characteristic of Assad’s Brazilian inflected writing. Sequential flourishes followed by decaying echoes offer shades of Leo Brouwer. A pensive coda echoes the voicing of the opening, but the light seems to have overcome the shadows as the dissonance gives way to expansive, consonant harmonies.

Ronald Bruce Smith’s Five Pieces for Guitar and Live Electronics places the live guitarist in an interactive relationship to various kinds of digital processing, creating a hyper-guitar. In addition to the range of electronics processing, Smith explores different styles of guitar playing in the set. In the opening movement, variable delays capture insistent repeated notes and scale bursts, projecting them into a steely, synthetic landscape. The second piece establishes an exotic, prayerful texture over a drone evocative of Indian classical music, and features processing that modulates the initial pitch upon repeats and includes pointed bell sounds that articulate arrivals. Brusque chords, short slurred figures, and percussive effects trigger quickly decaying delays in the third piece. Motivic ideas are built upon each other additively, and midway through the movement a harmonizer contributes a lower register, shadowing the guitar part. In the fourth piece, a watery flanger effect enhances lush, extended chords, at times reminiscent of Satie. Smith describes the nature of the processing that generates the gong and chime sounds at the opening of the final piece: “resonance models that are excited by noise that is sent to them from the guitarist.” A haunting repeated figure in the guitar is sampled and provides a pad for a rhapsodic, improvisatory solo line to emerge above it. In the work’s final section we hear non-pitched extended techniques on the guitar accompanied by tintinnabulation sounds in the electronics before a final shimmering descending scale.

Written at the behest of his son as an antidote to his concerns about the guitar repertoire, Elias Tanenbaum’s Music for Guitar is gestural and episodic, conjuring and maintaining a sense of mystery throughout. Bent notes and right hand tapping are among two of the uncommon techniques that figure into a tapestry of textural ideas. Long structural lines are delineated by register and timbre if one listens to them as a sort of linear counterpoint in time. At the end of the work, the strings are slowly detuned, melting away the frame of reference that is the guitar’s standard tuning setup. With this final deconstructive gesture, and indeed with the adventurous piece as a whole, Tanenbaum the elder was symbolically taking his son’s request one step further, adding new work to the repertoire while simultaneously suggesting a challenge to its conventional boundaries.

Dušan Bogdanović’s Games sets poetry written in 1954 by the late Yugoslavian poet Vasko Popa. Indian ragas, Balkan modes, word painting, polymodality, palindrome, and polymeter figure into Bogdonavić’s compositional toolbox for the piece. The opening song, “Before Play,” is a duo for voice and guitar where the guitar imitates the vocal line with rich, embellished passagework. As the vocal part descends in tessitura on the words “down to the bottom of your abyss,” the guitar ascends to play ambiguous, percussive pitches beyond the fretboard. Flute and percussion join for “The Hunter,” a vaguely hypnotic song accompanied by planing chords in the guitar, percolation in the gongs and mellifluous fragments in the flute. A slow ostinato lays the foundation for “The Rose Thieves,” over which the guitar and flute play languorous ornamental lines as a counterpart to the ominous text. “The Seducer” contains the work’s most experimental music thus far; short, clangorous sonic machines that comment on the vocal part. “The Chase” is driven and insistent, with a sprechstimme style vocal part anchored by an exotic groove established by the percussion, and punctuated by syncopated guitar chords and improvisatory solo lines in the piccolo. “Ashes” is a disembodied lullaby that evokes the ethereal music of George Crumb, with vocal melismas shrouded in eerie foreboding sounds in the ensemble. The final song of Games, “After Play,” returns to the condensed word painting gestures of “The Seducer,” before it closes with a lilting, bluesy coda.

The final work on the album, the title piece by John Anthony Lennon, was written as part of a triptych called The Fortunels. The melancholy piece is an elegy, written upon learning that his former composition teacher was ill. Poignant melodies emerge from broken arpeggiations of somber modal chords. Similar to much of the other repertoire on the album, Lennon’s work points past the classical guitar repertoire to folkloric styles that are grounded in laments and deeply felt catharsis.

Recorded at the San Francisco Conservatory of Music, except 2-6 recorded at Wellspring Sound, Acton, Massachusetts

Guitars: Daniel Friederich, 1996, on Games Stephen Connor, 2012, on all other tracks