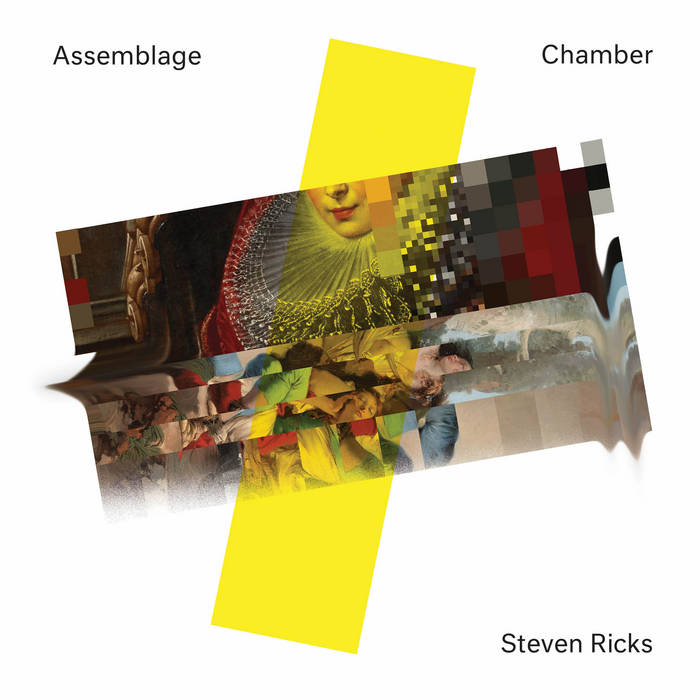 Composer Steven Ricks' Assemblage Chamber features three chamber works that incorporate elements of the Baroque into Ricks' glitchy, collage oriented textures. An eclectic artist who is active in electronic music and free improvisation in addition to through-composed acoustic work, Ricks filters Baroque influences through his omnivorous style, responding at the end of the recording with an electronic reaction piece, a reckoning with incorporating older material from the vantage point of 2022. Assemblage Chamber features performances by counter)induction, the NOVA Chamber Players, Aubrey Woods, Alex Woods, and Jason Hardink.

Deconstruction and fragmentation are core components of composer Steven Ricks’ work. On a previous New Focus Recordings release from 2015, Young American Inventions (FCR158), Ricks processed the detritus of the American aural landscape through his own modernist lens, designing glitchy electronic and ensemble textures, peppering them with quotes from disparate sources like Steely Dan, Steve Reich, and Milton Babbitt, and mixing them with shards of drum samples and automated call center style voices. On Assemblage Chamber, Ricks turns to the past, mining the juxtapositions, improvisatory spirit, and rich rhetorical framework of the Baroque. Ricks’ deconstructive impulse flowers and perhaps inverts itself in this context, extrapolating possibilities instead of picking them apart. With wit and a deft compositional hand, Ricks creates three ensemble works, two featuring the harpsichord, that use Baroque conventions as a springboard to reveal a prismatic version of its characteristic tropes. The album closes with the electronic title track, a piece that functions as a kind of reconciliation between Ricks’ journey into the musical past and an artistic voice more familiar to those who know his work.

The French overture style repeated dotted rhythms that open Heavy with Sonata are subtly subverted as soon the harmonic language begins to unfold. Ricks migrates towards chord voicings which, while still connected by contrapuntal voice leading, stretch beyond Bachian harmonic function to a lush, open harmonic world. The grandeur of the processional phrases is momentarily shattered by chromatic outbursts, interrupted by the chaos of contemporary harmonic possibilities. The second movement unfolds in moto perpetuo style, featuring repeated, uneven loops that allude to the developmental strategy of fortspinnung. The third movement, “I’ll Amend the Current Trend,” opens with a syncopated passage that cycles through triadic areas, almost as if to check the tuning of the keyboard, while the strings pluck and poke in the background, as if to imitate the harpsichord’s dry manner of sound production.

Piece for Mixed Quartet also features harpsichord with a string ensemble, but finds Ricks in a decidedly more methodical mode. “Dance of Spheres” places the harpsichord and ensemble in direct dialogue, with the strings offering a range of responsive material to a series of cubist reorganizations of a primary harmonic progression. The two groups become increasingly fused over the course of the movement before they begin to move as one integrated machine. “Baroque Assemblage” opens with hints of a broken phrase that we have not yet heard – Ricks reveals it momentarily, a Vivaldi-esque ritornello of sequential arpeggios. But the movement retreats to off-kilter, unsteady repetitive figures interrupted by brief soloistic gestures in each instrument. In contrast to Heavy with Sonata’s seamless stylistic transitions, Piece for Mixed Quartet utilizes Baroque allusions as one component of a collage of contrasting elements.

Reconstructing the Lost Improvisations of Aldo Pilestri also vacillates between overt references to the Baroque and organic, mechanistic textures. The element of improvisation opens up an additional parameter, referencing its importance in the music of the 18th century. An introduction explores irregular repetitions of rhythmic motives within the unusual instrumentation (guitar, bass clarinet, string trio). The guitar then improvises over an uneven pizzicato background figure, joined shortly by the violin, facilitating a structural transition. Two reflective guitar cadenzas alternate between harmonics and rolled chords, providing soliloquies that reflect on the trajectory of the piece. We hear shades of the syncopated material from “I’ll Amend the Current Trend” re-orchestrated to integrate the anachronistic guitar and bass clarinet, before a tongue in cheek quotation of Vivaldi’s Four Seasons takes aim at one of the Baroque’s sacred cows. A driving, intertwined final section slowly disintegrates into pops, plucks, and snaps, settling into a vamp for an improvised coda between prepared guitar and non-pitched sounds in the strings.

In the final track, Assemblage Chamber, Ricks returns to the soundworld of Young American Inventions to take stock and reconcile with his foray into older aesthetics. Snippets of material from the earlier pieces and improvised fragments are processed and interwoven inside an electronic web that meditates on the music that came before. In this way, the title track is a reflection on the album as a whole, but also a debrief on a repertoire and tradition that is constantly being reexamined and reconsidered. By recontextualizing his aesthetic time travels in the final track, Ricks reclaims something of the adventurous spirit of the Baroque itself that is no longer located in the musical materials of the period, reminding us that at one time, everything old was brand new.

Track 7 created, mixed, and edited by Steven Ricks from loops and material taken from tracks 1 - 6, with additional material provided by Daniel Lippel and Jesse Mills
Additional mixing by Jeff Carter