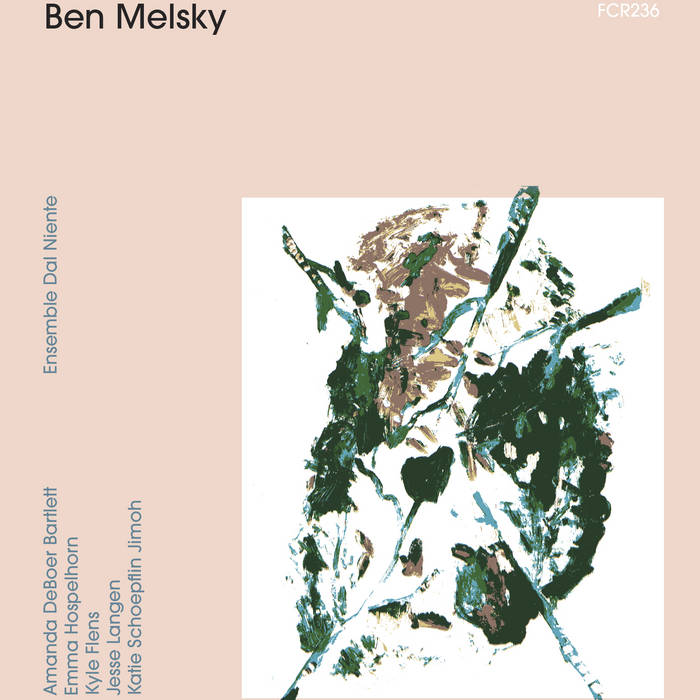 On this recording of new repertoire for harp, Ben Melsky of Chicago’s Ensemble Dal Niente (along with colleagues flutist Emma Hospelhorn, guitarist Jesse Langen, clarinetist Katie Schoepflin Jimoh, percussionist Kyle Flens, and soprano Amanda DeBoer Bartlett) present several new works written by composers in their closely knit community that establish the instrument as an ideal vehicle for contemporary aesthetic exploration. Through extended techniques on the instrument, as well as vocalizations, alternate tunings, and experiments with open form notation, these works engage with the leading edge of compositional experimentation through the lens of one of music’s oldest, and most ubiquitous, instruments.

Tomas Gueglio’s After L’Addio (a reference to Sciarrino’s solo harp work, L’Addio a Trachis) opens the album by directly confronting the most recognizable of harp gestures, the glissando, combining it with a technique he and Melsky developed involving dragging finger calluses along the string, cheekily called the “Guegliando.” The dry, obscured contour of the calloused gesture is splashed with the color of fully pitched glissandi, trills, and accented notes, creating a multi-dimensional, multi-registral texture. Felt (describing material used by the performer to produce a modified attack on the strings as well as a subtle sustained sound on the body of the instrument) stands in opposition to the opening work in its use of mitigating material between the player and the instrument. The music is spacious and introspective, unfolding in contemplative phrases, each separated by a brief pause.

Alican Çamcı’s perde was composed through a process of transcription. Çamcı recitated fragments of a 15th century Persian religious poem called a masnavi, and then used the resultant rhythmic contour as the basis for the organization of the piece. Since the masnavi is written in strict poetic meter, there is a multi-layered process of translation from the original pacing inherent in the poetic fragments to the resultant musical material. By combining spoken and sung syllables through the flute, extended techniques, and unison and composite rhythms between the two instruments, Çamcı establishes a ritualistic deconstruction of this poetic fragment.

Fredrick Gifford’s Mobile series explores indeterminacy and asks the performers to reorder materials to create a unique performance of the work each time it is played. Mobile 2015: Satirise, for guitar and harp, takes particular advantage of the shared timbral territory between these two instruments -- plucked, strummed, hit, and rubbed on their respective bodies. The microtonal tuning between them further reinforces the otherworldly nature of this work of discovery.

Composer Christian Wolff’s extensive work with alternative notation and new systems for facilitating structured improvisation provides the source of Wang Lu’s inspiration in After some remarks by CW on his work for harp and clarinet. Opening with rich multiphonics in the clarinet, punctuated by bell-like harmonics in the harp, the work explores what Wang Lu describes as “delicate sound objects” — intricate hybrid timbres and poignant expressive moments underscoring the contrast between sustained notes and the immediacy of plucking.

The expression marking for Igor Santos’ Anima is “mechanically,” an apt directive for a work that erects repetitive loops of glitchy percussive sounds around infectious composite melodies. The work’s kinetic inevitability is interrupted on several occasions for a closer examination of the sonic components of a given loop, while other times the loop itself gets stuck like a skipping record. A haunting, spacious middle section and a delicate coda of croaking and scratching sounds provide disembodied contrast.

Eliza Brown waited until the later stages of composing On-dit to choose and incorporate the short text fragment by Voltaire. First, she composed the harp part and the breathy material in the voice as well as some of the melodic material, adding the text last. The result is a work that prioritizes a patient meditation on the timbres of the voice and harp over a text driven structure.

With this release, Melsky and his Dal Niente colleagues document seven substantial new works to the harp chamber music repertoire that speak to many of the aesthetic concerns captivating composers today. This recording also celebrates Melsky’s tireless advocacy in asserting a prominent role for one of the world’s oldest instruments in the current avant-garde.