Between Us All: New American Art Songs for Voice & Guitar

by The Bowers Fader Duo 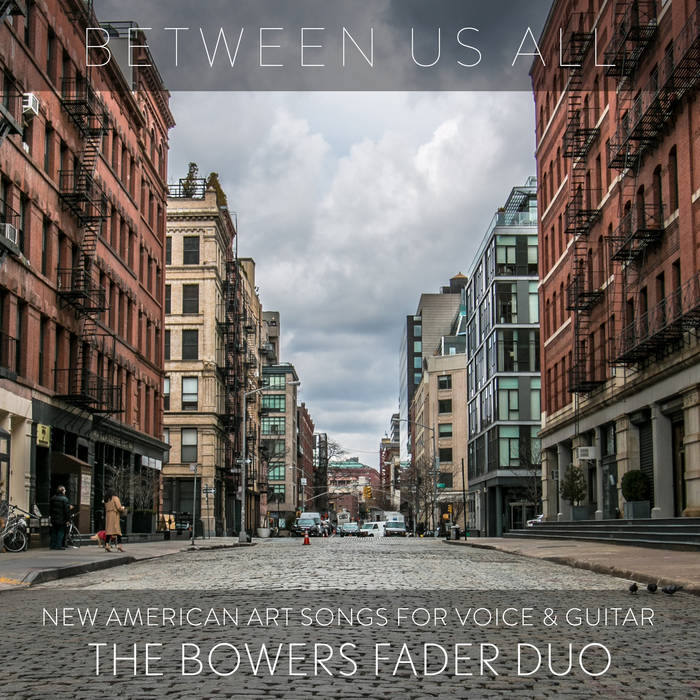 The Bowers Fader Duo (Jessica Bowers, mezzo-soprano, and Oren Fader, guitar) formed in 2009 to promote contemporary art song by American composers, and has commissioned and premiered 20 works since their inception. This collection, their first full length recording, presents premieres by four of their closest composer collaborators, Paul Salerni, Scott Wheeler, David Claman, and Tim Mukherjee. The works present the texts in a transparent manner, alongside a colorful range of musical context and expression, focusing on shadings of musical and textual meaning. Throughout, these recordings highlight the duo’s warm and engaging performances and insightful readings of these new scores.

Paul Salerni’s Something Permanent sets seven Cynthia Rylant’s poems that are inspired by iconic photographs by Depression era photographer Walker Evans. Opening in the low register of the mezzo voice, “Land” unfolds with flowing ascending arpeggios in the guitar, while the text depicts a complex relationship to the land, site of ceaseless labor but also of poignant nostalgia. “Mission” tells of a place of worship that, despite its outward shabbiness, contained within its walls salvation for the protagonist. “Minstrels” engages with the complicated history of African American musician entertainers, and the inherent human need to find freedom through performing -- Salerni’s music reflects ragtime influences and brings us back to a fraught time in American history. In “Boys”, a series of sequenced phrases evoke adolescent fantasies, while a churning riff conjures the urban scene of “Apartment.” A sensual habanera rhythm underscores “Bed”, a complex portrait of domestic intimacy, before the gentle lullaby “Rocker” closes the set.

Scott Wheeler turns to his familial language of Italian for his set of love songs written for the duo. The chromaticism in “Non mi mandar messaggi” embodies the bristling text of the spurned wife seeking connection with another man. Bell like harmonics open Abruzze’s “L’amor mio partì soldato”, opening up into sonorous arpeggiation in this expression of devotion to a lover off fighting battles. “Vieni, corri da me,” by poet Ida Travi, is based on a 1934 popular song and is set here as a sultry tango. Also included is the setting of Anne Ross’ evocative “She Left for Good but Came Back,” a portrait of the American West, with a touch of “cowboy blues”.

Jessica Bowers beautifully conjures vocal traditions of the East in David Claman’s Ganga-Yamana, with a text in Hindu extolling the virtues of uniting one’s life with another. Claman’s other two songs set Herman Melville texts: first, “The Maldive Shark” with an ominous refrain, and second “The Enviable Isles”, a lush setting characterized by quartal harmonies and a lilting accompaniment.

Tim Mukherjee’s Folk Song Settings closes out the recording, featuring texts that explore longing, lost love, spirituality, and mortality. The work contains two instrumental solos as well as many extended passages for guitar alone, beginning with an introductory solo guitar “Prelude” that is alternatively virtuosic and pensive, highlighting Oren Fader’s technical prowess and expressive sensitivity. The setting of the Scottish song “Adieu, Dundee” is a flowing waltz basking in the resonance of voicings including the guitar’s open strings. His approach to “O Come Emmanuel” is multi-layered and intricate. Engaging with the origins of the hymn in 12th century antiphonal chant along with its ubiquity in worship services up to the present day, Mukherjee’s musical material merges a modal sensibility pointing to the chant tradition with elegantly voice led chromatic re-harmonizations of the famous melody. The subsequent “Interlude” employs arpeggiations of chords planed up and down the guitar neck over an E pedal in the style of canonic guitar works by Villa-Lobos and Brouwer, and helps to establish a bridge between the modal “Emmanuel” with the earthy final song. “Idumea” is drawn from “The Sacred Heart” collection of four-part songs by American composers from the 17th to 19th centuries. Mukherjee draws on the American tradition of spirituals for this setting, as a powerfully sung melodic refrain in the voice is intensified by a guitar part that adds layers of complexity as the song unfolds, returning throughout to blues inflected material.

“Between Us All” is a rich collection of new art songs for guitar and voice, performed with elegance and commitment, that invites the listener to lean in closely to hear subtleties of text setting, harmonic color, and stylistic reference points. One can look forward with eagerness to subsequent Bowers Fader Duo releases of their growing repertoire.

If you like Between Us All: New American Art Songs for Voice & Guitar, you may also like: