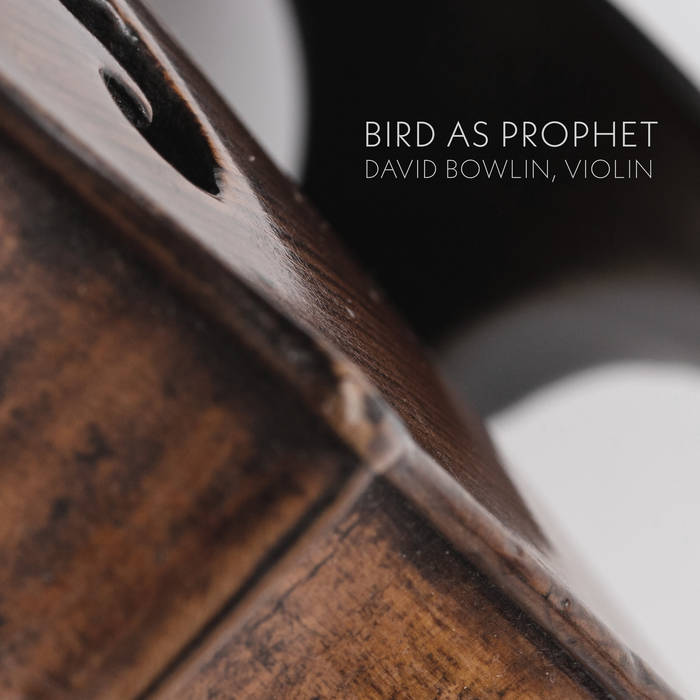 Violinist David Bowlin has assembled a collection of new works for solo violin and with electronics that carry the virtuoso tradition forward, exploiting the instrument’s rich history while contextualizing it within a broad palette of contemporary aesthetics, some grounded in compositional craft and some responsive to other music cultures.

“Bird as Prophet” opens with Mario Davidovsky’s seminal Synchronisms #9 for violin and electronics. Davidovsky’s Synchronisms series for live instrument and pre-recorded sounds is a landmark in the electro-acoustic literature. Very cognizant of the potential negative implications of technology driven innovations in music, Davidovsky made it his priority to humanize his electro-acoustic pieces, constructing a chamber like relationship with the electronics, and using them to create a hybrid acoustic-electronic instrument. Davidovsky was a violinist himself, and in this work, one hears fragments of the virtuoso violin tradition he studied, but through a distorting lens.

Bowlin has had a long standing collaborative relationship with Russian/Bulgarian composer Alexandra Karastoyanova-Hermentin, facilitated by his longtime tenure in the International Contemporary Ensemble. On Kastena, he is joined by ICE cellist Katinka Kleijn. Opening with a plaintive cadenza for the violin over a sustained cello drone, Kastena explodes into a vigorous dialogue between the two instruments. The piece returns to the opening drone texture and ends with a haunting sotto voce soliloquy in the violin. Mari Mamo for violin, flute, and percussion (Bowlin is joined by flutist Conor Nelson and percussionist Ayano Kataoka) is inspired by Bulgarian folk music. A main melody is passed between the three instruments, with short punctuations that propel the music forward. The composer joins the performance at the end of the work, with an affecting improvised vocal performance in the Bulgarian tradition.

The title work for violin and piano (Tony Cho, piano) by Martin Bresnick takes its inspiration from Robert Schumann and Charlie Parker alike. Sequential development of motivic and harmonic information drive the rhapsodic piece forward, as the violin leads with angular lines and drastic character shifts and the piano often supports with imitative material. If Schumann provides the inspiration for these expressive contrasts (with the impetuous “Florestan” side of his character dominant here over the more introverted “Eusebius”), then perhaps Parker is the model for the clever negotiation through patterned phrases.

George Walker’s episodic Bleu for solo violin was written for his son Gregory, and was initially intended as an encore for recital programs, though Walker the elder acknowledges that it may not be light enough to fill that function. It is an episodic piece, with material that alternates between virtuosic passagework and poignant melodic material played in double steps. The composer indicates that the title obliquely references the blues, through an underlying melancholy, and a very brief quote of a jazz tune towards the end of the work.

Du Yun’s Under a Tree, an Udātta has as its backing track a recording of Vedic Sanskrit chanting. Bowlin’s violin then performs an extended cadenza over the incantation, covering a wide swath of expressive territory, from wild glissandi and feverish scalar passages to rich melodic lines over a drone string. “Udātta” is a term for an inflected raised tone in Vedic chant, and one can hear similar microtonal shadings in the violin part, evoking the violin’s bowed cousins in Southern Asia.

Bowlin’s “The Bird as Prophet” is a rich collection of contemporary approaches to violin writing. With an emphasis on the lyrical strengths of the instrument as well as a contextualization with the virtuoso violin tradition, the works on this recording cover territory from modernism to extended minimalism as well as drawing on music from traditions outside the Western art music canon. Bowlin’s extraordinary command over his instrument, and his characteristic expressive power, are the main voice throughout, a clarion call for narrative driven, intricately interpreted performance.