by The City of Tomorrow 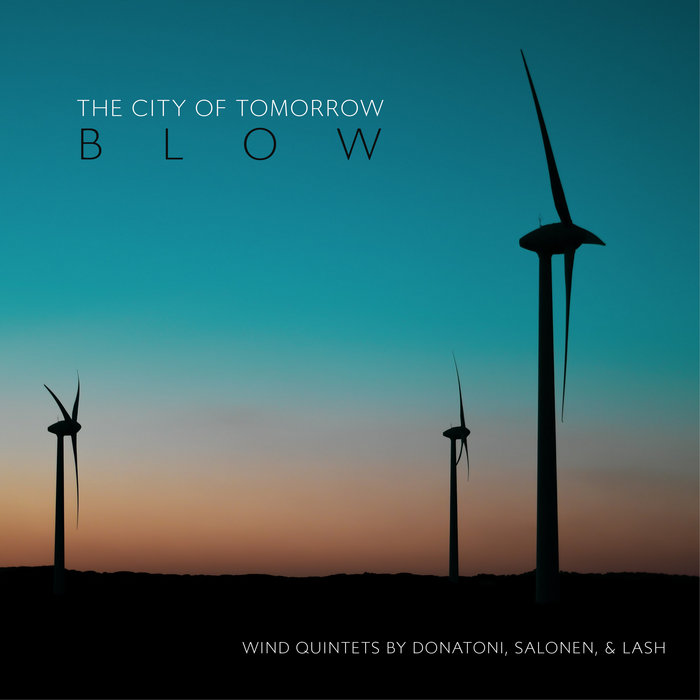 Wind quintet The City of Tomorrow features adventurous and experimental music in their programming, bringing instrumental virtuosity and an openness to extra-musical components to their performances. The centerpiece on Blow is an ambitious, newly commissioned work for the ensemble by Hannah Lash, bookended by riveting pieces by Franco Donatoni and Esa-Pekka Salonen. Running through the repertoire is a thread of the collective and the individual, as each piece highlights soloists in the ensemble along with a chorus of ensemble textures. The album highlights the ensemble’s unified interpretative vision and powerful performing style.

Donatoni’s title work is emblematic of his idiosyncratic style. Prizing irregular approaches to phrase development, off-kilter rhythms, and repetition that revels in deconstruction, Donatoni’s music percolates with the energy of an unpredictable creature. After an introduction that presents some of the musical building blocks of the piece, the flute takes a lead role, playing darting figures, while the other winds punctuate fragments of those lines with accented chords. As the piece evolves, different instruments assume a similar primary role, establishing a quasi-antagonistic relationship between soloist and group that facilitates Donatoni’s mercurial compositional personality. Much of the material explored in the solo parts is non-idiomatic, adding another dimension of tension to an already taut texture. The work ends with an uncompromising thirteen second non-diminuendo tutti chord, a static yet charged moment in a perpetually active piece.

Hannah Lash’s Leander and Hero was commissioned by The City of Tomorrow to address an apocalyptic theme in immediate terms. Lash chose climate change as her source of inspiration, and used the Greek myth describing a lover swimming across a body of water to see his love, only to be felled by a vicious storm. Lash humanizes the enormity of the climate crisis through the violent storm that claims Leander’s life, using a time honored narrative technique of expressing universal trauma through the tale of individual figures. Depicting the two lovers as birds within the program of the piece, the piccolo and E-flat clarinet assume the roles of the aviary protagonists, playing alone, as a duo, or allowing the rest of the ensemble to play as a sort of Greek chorus. A flighty ascending line becomes a recurring motive and expresses hope at reunion in the opening movement. The second, “Courting Dance,” is cautious, reflecting uncertainty and foreboding. In “Flocking” we hear the swooping nervousness of birds before a storm. “First Storm” gives us that event after all, as a duo dialogue between flute and clarinet. In “Hero and Leander,” we hear a chorale texture of somber harmonies underneath a polytonal melody in unison, a poignant representation of the divergence between the lovers aspirations and the impending reality. Uneasiness accumulates in “Interlude: away from the rocks,” as short scalar bursts intensify towards the end of the movement. Closely spaced intervals clash against each other in the opening to “The Storm; Leander Does Not Return to the Nest,” a movement that seems to view the storm from afar with a sense of dread. Lash encapsulates Hero’s reluctant acceptance of her lover’s passing in the eighth movement, where the piccolo plays halting figures over an ominous chord progression in the ensemble. In the final “Postlude: The Cliffs” we hear the same music that opened the set, but here the optimism of the ascending material is snuffed out by ominous chords. Lash beautifully captures the trepidation and fear surrounding the coming crisis through this programmatic work.

Esa-Pekka Salonen’s Memoria was composed for the 20th anniversary of the Avanti! Chamber Orchestra. Salonen used the opportunity to engage with the nature of memory, both of the history of an ensemble whose founding he was involved with as well as earlier works he had written, specifically an unpublished piece, Mimo. The opening section of the work searches for cohesion amongst the instruments, as alto flute and horn play soloist lines over a murmuring texture. The ensemble builds up a collective unity, emerging into flowing, divertimento style material that uses accents and uneven phrase groupings to propel the rhythmic direction of the music forward. The final section of the work opens up into a chorale, the ensemble weaving along through otherworldly harmonies that relish the unique hybrid timbre of this instrumentation.

The City of Tomorrow throughout performs with understated brilliance and command, calling our attention to the scores themselves. Their curation highlights a central theme in small ensemble writing — the dichotomy between the parts and the whole — and does so through three works which manage to be simultaneously crystal clear in the compositional intent and intriguingly mysterious in their aesthetic depth.

Recorded August 2018 at the University of Memphis, Memphis, Tennessee

Photo by Pagie Page on Unsplash.com

Special Thanks to:
The University of Memphis, Brandon Doggett and the Overton High School Band Program, Jeff Means, and Dan Gray