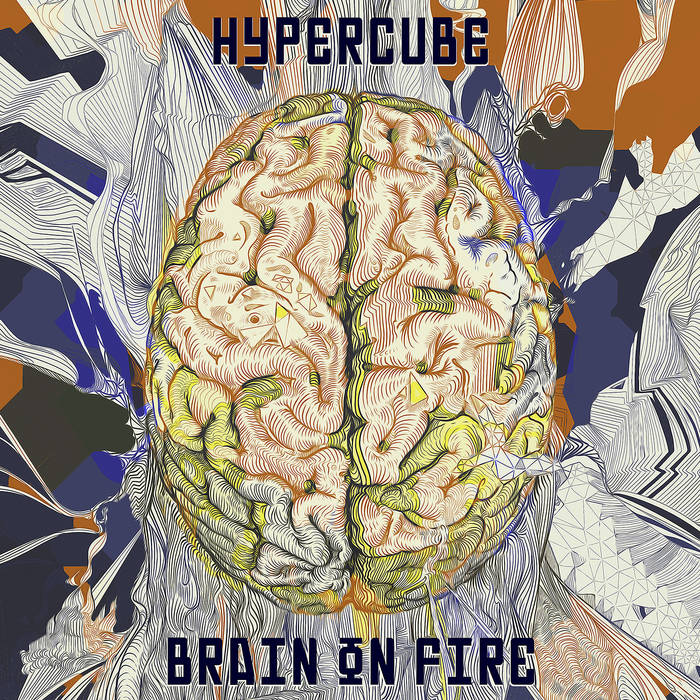 Composer, percussionist, and electronic musician Dennis Sullivan writes music that revels in collage textures, quick jump cuts between contrasting expressive worlds, and stylistic allusions. In under nails, scrapes, descending glissandi, and brief, cartoonish scale bursts are occasionally interrupted by ominous fragments of death metal vocals. As the piece progresses the elements become more integrated as Sullivan glues them together into hybrid instrumental gestures. Just before the six minute mark, the piece returns to the primordial scratching sound world heard in the opening, now heard as a sustained texture. The death metal vocals return periodically, and the ensemble is given a couple of tutti vocal passages on the line, “Hold on to your,” separated by creaky, disjointed sounds. The final section of the piece highlights Sullivan’s capacity to create electronic analogues in his ensemble writing, with written out crossfades between instruments and a scoring of extended sounds that mimics spatialization.

Sam Pluta’s music is also shaped by his deep involvement with electronic music, as well as a fascination with acoustic phenomenon and improvisation. American Tokyo Daydream IV (data structures/monoliths) is influenced by the Japanese noise scene as well as a modular approach to motives that will be familiar to listeners who have heard the Wet Ink Music Collective (of which Pluta has been technical director and a composing member since 2009). Chord masses ordered and reordered in angular fashion are connected by ascending and descending glissandi, delicate trills, quick descending arpeggios, and high squeals. Sustained chords in the accordion colored by saxophone multiphonics and light triangle hits anchor a section of brief repose before a dense reprise of the opening material. In the dystopic final section of the piece, the electric guitar plays an extended passage of ascending glissandi with a slide over a massive cauldron of noise dominated by sax multiphonics.

Philip Schuessler opens his Liminal Bridges with a pointillistic texture — fragments reminiscent of Morse code traded between instruments and lead into large arrivals, like architectural pillars. As this pulse driven music develops, the instruments alternate inserting elaborated figuration in the cracks of the established scaffolding. Throughout the work Schuessler plays with the speed of the repeated pulse motive, creating layers of independent activity in the ensemble as well as distorting the listener’s sense of linear time. Whimpering, chromatic descending passages and compact ensemble mechanisms anchor the middle section of the work before the piece slowly loses its textural continuity, disintegrating element by element and ending with a cymbal screech and a lone guitar harmonic.

Los Angeles based composer, guitarist, and artistic director of the wasteLAnd series Nicholas Deyoe writes powerful music that fuses his interests in noise, microtonality, and dramatically expressive structure. they solidify then tilt is a twenty minute tour de force that features Hypercube guitarist Jay Sorce. The work opens with a guitar arpeggio that highlights a microtonal tuning, as the ensemble slowly washes over the guitar in murky waves. Deyoe explores the beatings that result from closely spaced microtonal intervals, integrating guitar detuning, whammy bar dives, and tremolo on high partial harmonics into the fabric of the writing. Rich chord voicings in the accordion color the expressive character of the slowly evolving sections. Insistent distorted notes in guitar, raw overblown multiphonics in the sax, and aggressive percussion briefly break the work out of its contained intensity. The pulsating waves of the opening return with vigor before the piece closes with a series of disembodied guitar chords over a haze in the ensemble.

The final work, Casino (Remix) on “Brain on Fire” is by Hypercube’s own saxophonist and composer, Erin Rogers. After a dense, dramatic opening featuring descending wails in the saxophone, Rogers creates a pinball-machine like mechanism in the ensemble, bouncing sounds off of one another. The music opens up into an ethereal cloud, with a swirling halo of electronics providing the backdrop for a simple melody in guitar and percussion akin to a music box while the saxophone plays high trill figurations. The trills serve as a common link to the following section over a distorted low pedal point in the guitar. Sparring scales between guitar and sax culminate in several ensemble attacks worthy of a Hitchcock climax, while an unnervingly calm vocal sample emerges underneath. Casino (Remix) closes with the bone chilling passage from the opening.

With “Brain on Fire,” Hypercube makes an impressive and indelible stamp on the repertoire for an instrumentation that traces back to Louis Andriessen’s iconic canon, Hout. Gravitating towards composers who embrace the avant garde while still celebrating instrumental virtuosity, the ensemble has charted a compelling and dynamic path forward through these commissions and their polished and commanding performances of these works.

Recorded by Zach Herchen at Staller Center for the Arts and Adelphi University — Long Island, NY

Funded, in part, through grants from the Aaron Copland Fund for Music and the Alice M. Ditson Fund

Bonobo stops by to talk about his new record Fragments