Burned Into the Orange 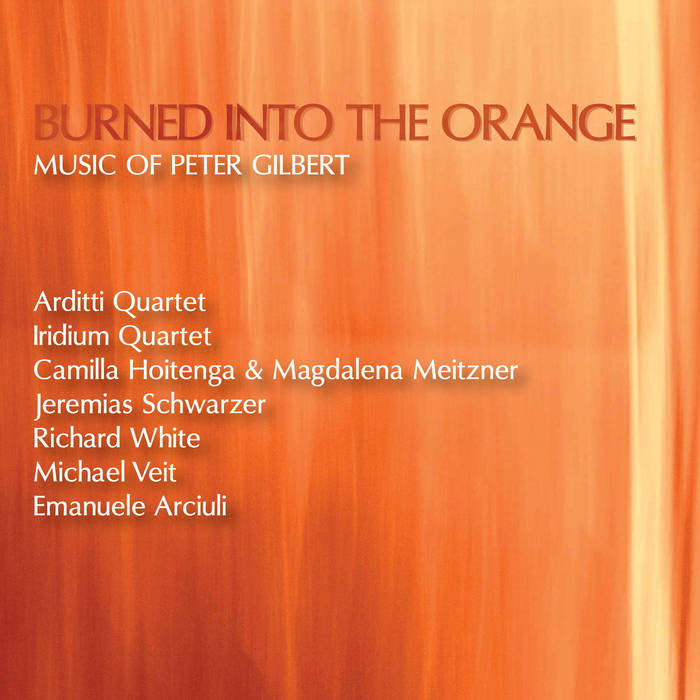 Composer Peter Gilbert fills Burned Into the Orange with a musical energy that sometimes patiently envelopes its listeners in phosphorescent harmonies and at other times pulls them through an intense timbral tunnel. Gilbert writes: “My music often aspires to create a sonic architecture that helps us lose our sense of time completely and allows us to partake in a kind of more direct aural experience in search of passageways to transcendence.”

The album opens with the voice opens wide to forget that which you are singing, a bracing sting from the Arditti Quartet as violin double-stops are pulling themselves apart while a stratospheric chorale gleams above. But the cutting edge of this sonic beam soon relaxes into a series of resonant clouds: vibrating, glistening, then subsiding into the next hovering tone-formation. The title comes from Gilbert’s adaptation of one of Rilke’s Sonnets to Orpheus which suggests that in forgetting what we know of song (forgetting we are even singing) we are opened to becoming one with music—a breath of the “Everything”. In this light, the drawn-out processes of sound sculpting (in which the Arditti Quartet’s renowned virtuosity is on display as they bring high relief to the microscopic details of vibrato and intonation) seems to incarnate this “different breath”, this essence of being.

Upon the Awakening features closely recorded piano in what feels like a pre-echo of the album’s final piece. After the Arditti Quartet’s long, burrowing crescendos, this piece is a welcome exhalation. The cathartic ringing of the chords quickly takes on a kind of post-reality shimmering that suffuses the calming chorale in luminescence.

If the voice opens wide... manifests the sound of sound as vibration and Upon the Awakening manifests it as the hazy glow of reverberation, then Burned Into the Orange turns the sound of sound into gentle pulsation. The magic of the Iridium Quartet’s performance is that the saxophones seem to bend and melt into one another as the pulses’ tempos push and pull and overlap into an undulating series of bending layers and gently beating multiphonics.

Passage: Orange into Silver, a brief electronic intermezzo, carries the listener away from the warmth of the oranges inspired by the New Mexican landscape into a more penetrating metallic silver—a kind of astral wind that ultimately settles into another of the Rilke-inspired clouds of breath.

Following the long hold of Passage, the explosive attack that starts the flute-percussion duo Channeling the Waters is a shock to the system. More than anything else on the album, this piece embodies a world of contrasts as it moves crisply and palindromically through a series of short ritualistic scenes. Camilla Hoitenga and Magdalena Meitzner execute brilliantly a series of timbral intersections in which the flute and percussion function as one fluid body (quite literally when pouring water makes an appearance). Most stunning are the sections when the sensitive flute playing of Hoitenga (known for her close work with Saariaho) merges with Meitzner’s brilliantly skilled bowing of a flexatone.

The gripping end of Channeling the Waters is followed by another long exhalation, this time into a Rilke-cloud of electronics that creates a bed for the hyper-expressive cries from Jeremias Schwarzer’s basset recorder on the palm of your hand touches my body. At times the recorder just barely emerges from the supple electronic texture, expressively coloring the glow, while at other times multiphonics pour out entrancing pathos.

In By the Lonely Traveller’s Call, the wildly evocative stormings of Richard White’s inspired live performance are timbrally shaped by an amplified mute, giving the solo tuba an otherworldly sound in keeping with Walter de la Mare’s haunting poem The Listeners that gives the piece its title. The sung multiphonics in the second half of the piece become more and more ghostly until the chilling end on an impossibly low pedal B.

In Die Reflexionen des Schattens the sound of the shadows comes to life in rippling echoes whose spacings are constantly in flux creating a unique hall of mirrors for Michael Veit’s solo cello. After the vigorous confidence of White’s tuba, one is struck by the fragility of the cello sound often at the edge of disintegration. All of the six sections cadence in a series of pizzicato G’s except for the very last which flutters away in a magical world of airy harmonics.

On an album full of saturated sound spaces, the final track Soon as the Sun Forsook the Eastern Main begins with a startlingly unvarnished solo performance by Italian pianist Emanuele Arciuli. It shortly arrives on a hanging harmony he lets ring for longer and longer until it finally becomes clear that the piano strings’ resonance is transforming into something else. Resonances evolve through the piece into an increasingly independent chorus of distant voices. This striking metamorphosis could be a metaphor for the entire album. Gilbert often seems to be composing out a fantastical journey through a sonogram sprung to life in which microscopic oscillations are magnified into gestures and phrases. The liner notes refer to this phenomenon as “the sound of sound becoming sound.”