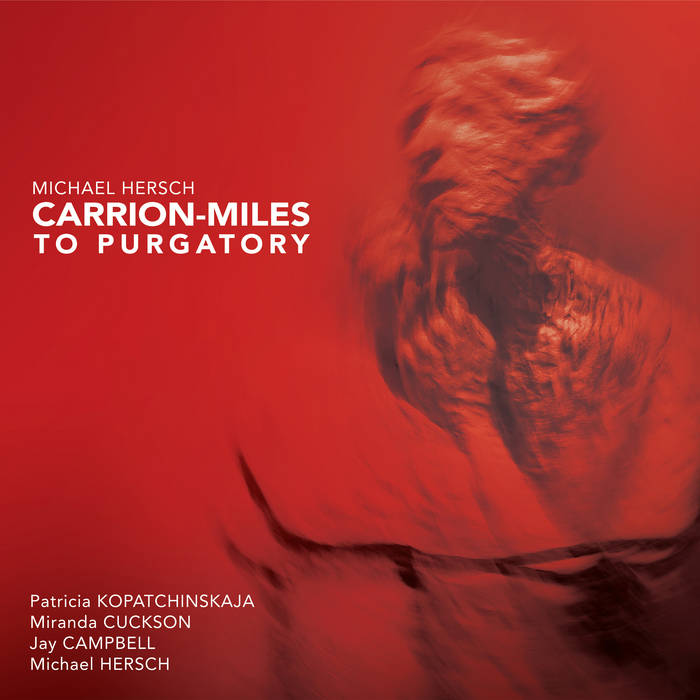 Mike Shockley In a word, emotive. Each interlocking piece commands attention: be it the intensity, the delicacy or the individual phrasings. Bravo to Michael Hersch and company.
I'm thankful that I had listened recently to Patricia Kopatchinskaja's work with Fazil Say. Otherwise, I might not have recognized this magnificent work. Favorite track: Music for Violin and Piano.

This collection of recent duos by composer Michael Hersch gives the listener a chance to hear the intense expressive contrasts so characteristic of his music in a profoundly intimate context. From jarring, closely spaced intervals, to delicate, ethereal harmonics, to bracingly virtuosic passagework, Hersch’s voice projects strongly throughout this recording featuring three of his most frequent performer collaborators: Patricia Kopatchinskaja, Miranda Cuckson, and Jay Campbell, as well as the composer himself on the piano.

Kopatchinskaja commissioned Hersch specifically to write a work combining vocal and instrumental performance, and the result is a harrowing piece which marries storytelling to song. The speaking part in ...das Rückgrat berstend is precisely notated with extensive expression markings, delineating specific dynamics, durations, and character indications that engage in a form of word painting with spoken narrative form. The source text is by Christopher Middleton, and at Kopatchinskaja’s request it was translated into German. The voice mostly is heard on its own while the strings answer and color the text in responsive fashion. Hersch’s meticulous notation of the vocal part ensures that it fulfills a dual role, both as the raconteur of Middleton’s angst ridden poetry but also as a third “instrument” in the composition. As with much of Hersch’s music, the moments of repose in the work are not entirely restful -- a hollow unease lingers in the disembodied intervals.

Hersch joined violinist Miranda Cuckson for a duo performance at the Brooklyn venue National Sawdust in the fall of 2018. Drawing from his work for violin and piano (the wreckage of flowers), solo violin (the weather and landscape are on our side, Fourteen Pieces, Five Fragments), and solo piano (The Vanishing Pavilions), Hersch created a new evening-length piece - an excerpt from which appears on this recording - which further underscores the violent and meticulous nature of both the music and the performance of it. Athletic, urgent material contrasts with static, meditative sustained tones and vertical pillars of resonating sonorities in a cohesive work that deftly weaves together disparate compositions into a new work, and captures a palpable balance of focus and freedom from the moment of performance itself.

Each of the thirteen movements in Carrion-Miles to Purgatory is paired with a fragment from Robert Lowell’s poetry collection, Lord Weary’s Castle. The connections between Lowell’s poems and Hersch’s music are largely subconscious, but the poetry provided Hersch solace during the piece’s composition - a time during which he was grappling with the recent death of a close friend. In calling for the spare use of vibrato throughout, Hersch indicates his interest in a sound world of maximum vulnerability, as demonstrated in the precarious unstable chords of the opening movements. Movement III is a distorted dirge, as discordant chords rock back and forth between the two instruments, and the monolithic quality of the rhythmic gestures in the preceding movements begins to loosen up in movement IV. Movement V recalls material from previous movements and prefaces material to be heard throughout the remainder of the piece. It stands in the middle of the composition like a summation and a foreshadowing, and immediately engages the listener in a meta-dialogue with the structure of the piece while one is listening to it. Movement VI is marked by luminous sustained dyads in the violin, out of which the cello emerges with unsettling ponticello utterances. Movement VII, “Ferociously,” returns to the visceral, towering sonorities from Movement III, and reasserts Hersch’s pattern of dichotomy between inward and strikingly outward music (underscored even further by the poignant, lilting melody in Movement VIII). Continuing along this pattern of contrasting energies, with newly inventive material in each subsequent movement, Hersch arrives at the last and longest movement of the work, an extended meditation on the material contained in the preceding movements. The work closes quietly, as we hear hymn-like material through a haze of resignation. Carrion-Miles to Purgatory marries the large scale structural gesture with the miniature character piece, and does so within the drastic frame of Hersch’s expressive world, highlighting his capacity to write gripping material in this most inward looking of contexts, the instrumental duo.

Music for Violin and Piano
Recorded by Charles Hagaman and Garth MacAleavey at National Sawdust. Brooklyn, NY
Edited and produced by Ed Tetreault