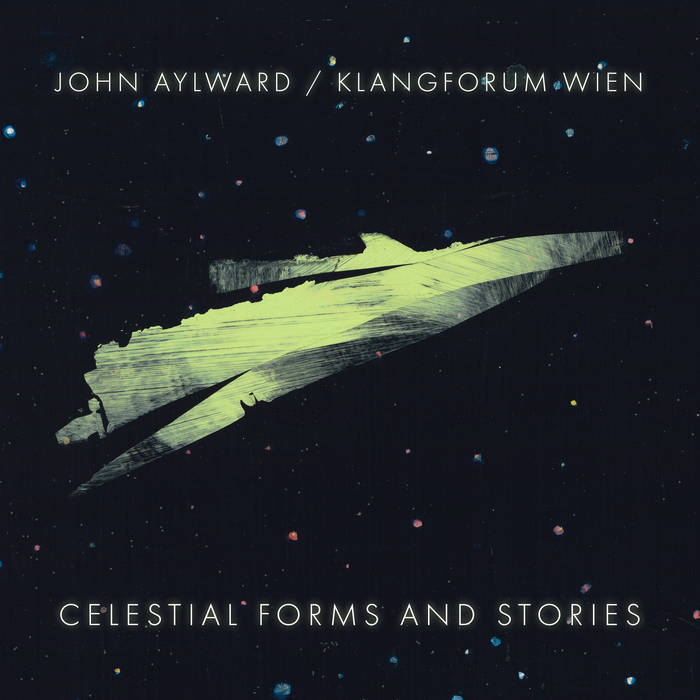 Inspired by Ovid's Metamorphoses and Calvino's deconstructive analysis of the classic Roman recasting of Greek myths, John Aylward's Celestial Forms and Stories establishes musical analogs to Ovid's way of depicting the world. Featuring musicians from Klangforum Wien in chamber formations, Celestial Forms and Stories encapsulates the transformative nature of myth, constantly being reimagined and reinterpreted over generations and retellings.

John Aylward’s Celestial Forms and Stories is a musical expression of a literary analysis of a classic Roman retelling of Greek myths. If that sounds like it will put the listener at several steps of remove from the original source of inspiration, it should. Aylward’s intention is not to merely portray the luminous complexity of ancient Greek characters such as Narcissus and Mercury, but to participate in an evolving reanimation of these stories. His inspiration is drawn not from the myths themselves, but from Italo Calvino’s analysis of Ovid’s venerated retelling in Metamorphoses. Calvino identifies Ovid’s predilection for explaining phenomena in terms of “elementary properties.” How might a composer explore these “elementary properties” and the narrative techniques used to develop them in a suite of works based on Greek literary characters? And to what extent are myths truly living organisms, kept alive by the renewed investment that new generations make in the analysis of the originals and their subsequent mutations? These are the questions at the core of Aylward’s work, heard here in a dynamic and colorful performance by Klangforum Wien.

The album opens with two pieces for a quartet of flute, clarinet, violin, and cello, Daedalus and Mercury. The quartet setting is an ideal platform for the exposition and development of distinct characters, a narrative technique Calvino highlights in Ovid’s writing. Aylward presents many of these characters within the piece’s first moments — fricative, anxious material in the flute and elastic glissandi in the violin are framed by architectural sustained pitches. Later in the piece, each of these ideas is mined more deeply in extended passages.

Mercury opens with an appropriately shifting, unstable texture. Fragile harmonics in the bowed strings ornament rich floating lines in the winds. Aylward revels in the unpredictable in this work, using evocative shadings to shift quickly between contrasting characters.

Ephemera is the earliest work in the set, and served as the template for the rest of the series. The clarinet delivers initial emphatic bursts over a charged cello tremolo — as the texture develops, those short fragments grow into ecstatic longer lines. The insistence of the opening gesture permeates the two instruments, as the evolving dialogue becomes more animated and intense.

The final two works are both for mixed septet, with the instrumentations being nearly identical — flute, oboe, clarinet, violin, viola, and cello, with percussion in Narcissus and piano in Ananke. A natural opposition forms in this instrumentation between strings and winds with percussion/piano occupying an intermediary role, punctuating material from both groups. Imitation drives the texture forward in Narcissus, as material is elaborated on, interrupted, and enclosed by other voices within the ensemble.

There is an obsessive quality to the examination of ideas in Ananke. Aylward seems particularly engaged with syntax in this work, as Donatoni might turn a gesture around to look at from all rhythmic and agogic angles, but with Aylward’s characteristically polychromatic coloristic palette. Stravinsky-esque short chords enhance an off-balance sense of anticipation, while a poignant middle section features oscillating figures in the low registers under occasional disembodied calls in the winds, like a distant foghorn. Aylward breaks the muted mood with a dramatic solo piano passage, highlighting bright chords played across several registers. Ananke ends with a repeated ten-note figure in the viola, a record skipping moment that closes the work and the album with a question mark.

That question mark underscores Aylward’s embrace of the living myth. Each new generation is the recipient of this treasure chest of ideas and stories, spurring creativity and inspiration. Aylward’s ability to step back and see his own relationship to this material in the context of a larger trajectory of reexamination is borne out in his work — simultaneously hyper-engaged with detailed specificity of sound while also manifesting abstract principles of narrative strategy into his approach to development. Celestial Forms and Stories is the byproduct of Aylward’s multi-layered relationship to timeless myths — Ovid’s retelling, Calvino’s deconstruction, and his own hunger to see beyond superficial musical expression to the palimpsest of a multi-generational legacy.

Cover Image: Aylward, Roberta. Nightlight. 2015
Acrylic on birch panel. In the collection of the artist

Back cover image: Aylward, Roberta. Flare. 2015. Acrylic on birch panel. In the collection of the artist