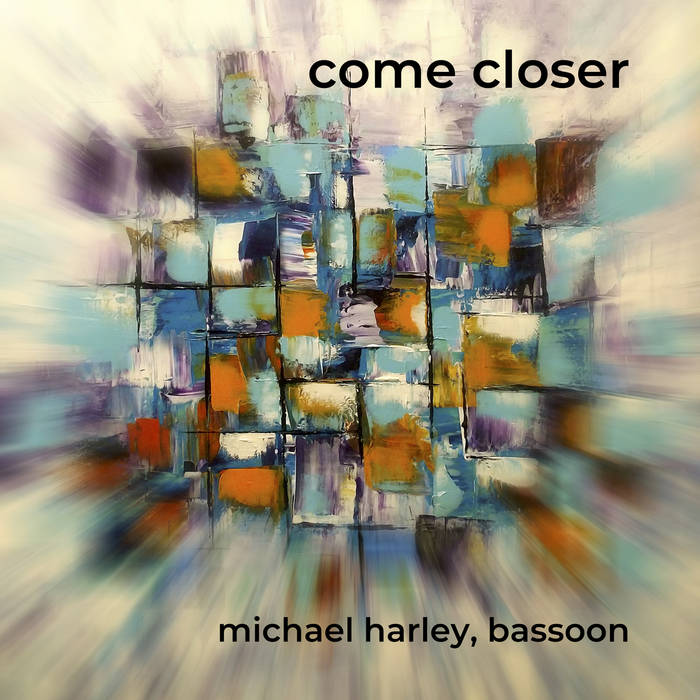 Bassoonist Michael Harley releases this eclectic collection of new works for bassoon that documents his work expanding the repertoire for his instrument and demonstrating its versatility in solo settings. Faculty at the music department at the University of South Carolina in Columbia (a fertile environment for new music), Harley established collaborations on new work with composition colleagues there, John Fitz Rogers, Fang Man, Reg Bain, and Jesse Jones. Also a longtime member of the critically acclaimed new music ensemble Alarm Will Sound, two of the works presented here are the result of intra-ensemble projects with his bandmates Stefan Freund and Caleb Burhans, and Harley’s work with Carl Schimmel was facilitated by a connection through Alarm as well.

“Come Closer” opens with the title track by John Fitz Rogers, a Reich-ian layered work for four bassoons, all played here by Harley. The piece opens with a precise hocketing texture at the 16th note, moving through a tonal chord progression with syncopated accents and short fluid runs. Reich’s influence is felt more strongly in the section that follows, with pulsing chords that fade in and out. At moments in the work, one of the bassoons emerges from the tightly constructed ensemble texture with a contoured melody.

Stefan Freund’s Miphadventures, with piano accompaniment, is a blues inspired work divided into sections — after the bassoon leads a scene setting introduction, the work settles into a lightly rocking texture in 9/8 meter. The second half of the piece is characterized by asymmetrical grooves with the piano alternating between imitation of the bassoon material and repetitive bass lines that drive the texture.

As in much of his work, in Alarums and Excursions: A Puzzle-Burlesque in Four Polymythian Acts, Carl Schimmel paints vivid character pieces over the four sections of the composition. He brings a dry wit and acute dramatic sense to his deft sense of motivic development and structural pacing, playing with rhythmic figures as if they were puzzle pieces and connecting contrasting material within a longer narrative. A bassoon cadenza encompasses the diverse energies heard in the piece before an energetic ensemble close.

Reginald Bain’s Totality was inspired by the August 2017 total solar eclipse, and consists of four movements, each representing a different impression of select phases of the phenomenon. A lyrical introduction captures the mystery surrounding the event, and leads into a Phillip Glass-esque section of excited, driving music outlining major and minor triads. Haunting, sequenced chords characterize the next section, laying the ground for halting music in the bassoon. The bassoon plays muscular, virtuosic arpeggios in the subsequent section, before the texture zooms in to focus on delicate chords in the high register of the piano. The work closes with a return to the minimalist music heard earlier, balancing out the sense of patient wonder in the work with music of exuberance.

Caleb Burhans’ Harbinger of Sorrows (a reference to the Metallica song Harvester of Sorrow from their album “…And Justice for All”) is a lament, featuring Harley on beautiful, singing lines above a quasi-ostinato in the piano. The melancholy of the texture and harmonic colors speaks for itself, but programmatically, the composer has indicated that the work was written as a response to the election of the 45th president of the United States.

The opening of Jesse Jones’ Yonder for string trio and bassoon joyfully conjures the rhythmic world of old time music, declaiming in hymn-like fashion the imagined text, Yonder, yonder! Oh! Yonder, yonder! Over Yonder! Jones contrasts this folkloric association with a pitch language and motivic treatment that lives more squarely in a modernist context, citing Stravinsky as an influence. The interplay between these elements guides the piece forward, finding many pints of common ground between the worlds of fiddle music and A Soldier’s Tale-era Stravinsky. Yonder is a fitting close to this Harley recording, focused as it is on contextualizing the bassoon within a wide range of compositional aesthetics of our time. Throughout, Harley is a consummate advocate, bringing his fine instrumental command to interpretations that display great understanding of the different styles at work in the repertoire.

Recorded at the University of South Carolina, School of Music Recital Hall, May and September, 2017

All works written for and commissioned by Michael Harley