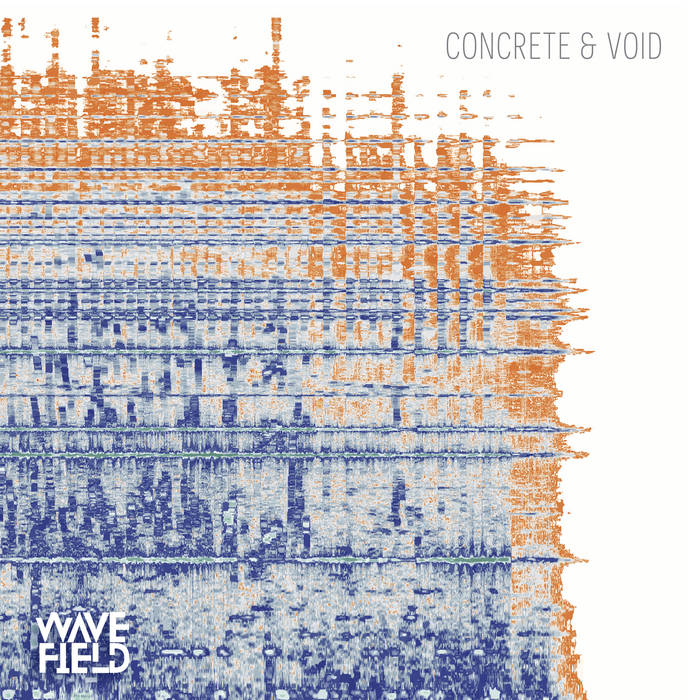 Wavefield, a New York City based contemporary music ensemble founded in 2016, releases its debut recording "Concrete & Void" featuring works recorded in October 2020 in an outside parking garage in New Jersey, an environment which facilitated social distancing as well as collective music making. The recording is as much a byproduct of their ongoing relationships with longtime composer collaborators and an openness to a wide range of notational contexts as it is a document of the resiliency of the creative impulse during a trying year.

The practical barriers to rehearsing during the Covid era shaped this project – the stipulation for the new works commissioned for the session was that they needed to facilitate reading and recording in one sitting. And yet the diversity of approaches within these restrictions was illuminating and speaks to the rich practice that has evolved around non-traditionally notated ensemble music.

The recording opens with Jen Baker’s "Lightsicle Sirens," a vast expanse of undulating frequencies that invites the listener to explore the resonance of this unconventional space. Baker revels in beatings and friction between closely spaced intervals. The unfolding texture becomes more active as individual wind instruments emerging and receding in swells before paring down one by one, leaving a texture of sibilant sounds for the work’s close.

During the Covid lockdown, Jessie Cox created an online TV series, “Space Travel from Home,” which he describes as a “personal ritual to digest and deal with this unusual situation.” Space Travel From Someplace Else is akin to a remix of that material – each performer responds to video excerpts of Cox performing and text instructions mapped onto the piece’s overall timing. In this way, the musicians play an active role in the remix process, their individual voices melding together to create a percolating cauldron. The results are restless and cathartic, a collective sonic reckoning with confinement.

Victoria Cheah’s "A wasp, some wax, an outline of the valley over us a fall" mines the deep sensual impact of slow moving harmonies. After several minutes of full scoring for the ensemble, the texture thins down to a bare major seventh between trombone and flute, a stark pillar of uneasy dissonance. A climactic passage intensifies the acoustic density before the texture diffuses again for a weightless ending.

Greg Chudzik’s "Silo" was originally conceived for performance inside a grain silo, exploiting the acoustical properties of the hollowed out, metallic cylinder. Samples are played by a Max/MSP patch; the material from the electronics is from recordings of the same indeterminate music that the performers are asked to play live, creating an ambiguity between live and processed sound that captures the spirit of this beguiling piece. Gradually the register of the music ascends, as if floating up to the top of a silo.

The final work on the recording is by Wavefield conductor and co-artistic director Nicholas DeMaison. "Untitled 1, for Wavefield" uses a graphic score, “drawn from spectrographic renderings of sounds that are far from New York City.” Wavefield’s interpretation of these notational images is tumultuous and charged. For many of these musicians, their first in-person musical experience of the pandemic was this recording session. How appropriate it is then that they were prompted with material that was inspired by far away locations, psychically liberated from the close quarters in which they had been quarantined for so many months.

Cover Art: Detail 1 from Untitled 1, for Wavefield by Nicholas DeMaison

Interior Art: Detail 2 from Untitled 1, for Wavefield by Nicholas DeMaison

All pieces commissioned by Wavefield except Silo