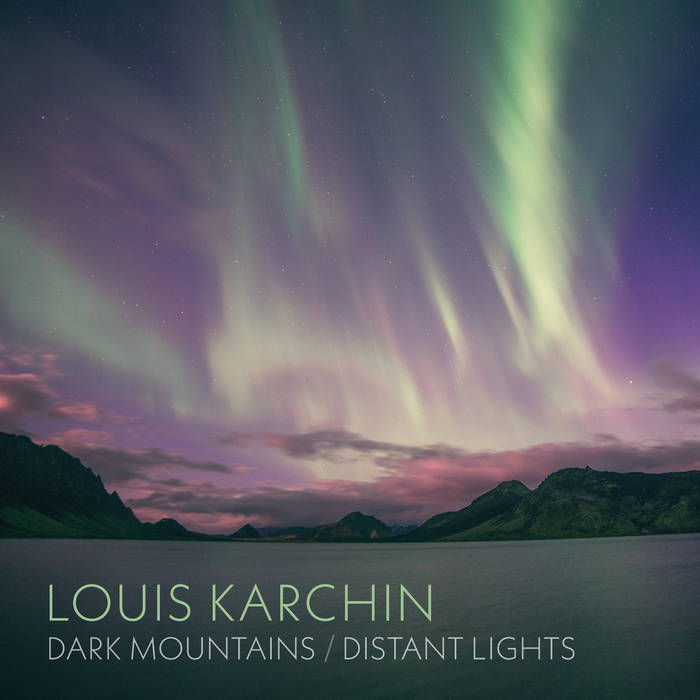 Composer Louis Karchin imbues his music with characteristics that are in dialogue with other disciplines that inspire him -- a rich relationship with poetry, the visual arts, the natural world, and iconic places inform aspects of his writing, from the structural to the gestural level. “Dark Mountains/Distant Lights” is a collection of Karchin’s solos and duos written between the years of 2004 and 2017, and performed here with sensitivity by three of his most frequent collaborators, violinist Miranda Cuckson, pianist Steven Beck, and oboist Jacqueline Leclair.

Stéphane Mallarmé’s early love poem, “Apparition,” serves as a jumping off point for the first track, Dreamscape. It opens with a crystalline, hybrid sonority of a sustained oboe note with a murky violin trill, unfolding in gestures that glisten and evaporate. Throughout, one hears Karchin’s careful attention to timbre and instrumental integration. The climax compresses much of the previously introduced material, before we hear a shrouded barcarole in a nod to Venice, the city of the work’s premiere performance. Dreamscape closes with a lontano statement of the ethereal opening trill motif.

Rhapsody for violin and piano is a more directional work, loosely divided into three sections: an exposition, a contrasting slower section that builds to a climax with unexpectedly tonal harmonic movement, and a final burst of exuberant arpeggios that closes triumphantly on a major chord. Throughout Rhapsody, Karchin seems to examine his dialogue with the violin sonata tradition, employing momentary unisons and conventional melody and accompaniment roles before giving way to more angular, fragmentary material between the two instruments.

The solo piano work Three Epigrams began as a one movement work, “Celebration,” dedicated to Charles Wuorinen. Annunciatory proclamations suggest a fanfare, garnished by sextuplet flourishes in the high register. The second and third epigrams, as with Dreamscape, conjure Venice, and more specifically two of its most famous artistic figures, Luigi Nono and visual artist Emilio Vedova. “Expressions,” is an atmospheric movement, with haunting resonances and ominous rumblings in the bass. “Upheavals” is inspired by the wild juxtapositions in Vedova’s paintings. Jaunty, disjunct chords and registral leaps punctuate this restless movement.

Dark Mountains/Distant Lights was written for violinist Miranda Cuckson and designed to highlight the virtuosic possibilities of the instrument. Karchin was captivated by an image during the composition of this piece -- the impact of one’s vantage point on the visual perception of mountains and their slopes. The dichotomy between perceiving a mountain from near or far is manifested in the alternation between tasto and ponticello techniques. Violinistic trills, arpeggiation, and passagework fill out this searching solo work. The piece ends with a high register trill fading away to near inaudibility, revealing the wispy sound of the bow gliding over the string. One can almost hear the wind through the mountain treetops.

Lyrics II for solo piano contains two contrasting movements, the first a slow lamentation, and the second more rhythmic and agitated. Karchin writes that his attraction to “lyric” poetry informs the composition of these pieces, specifically the interest in capturing the uniqueness of a specific moment. The opening movement is somber and solitary, whereas the second movement’s punctuated, muted bass notes and insistent alternating chords evoke an abstract image of noble verticalities.

Prayer for solo violin is introspective and reflective, and was written for a concert by the South Korean ensemble, Spectrum Sonori. In Reflection for oboe and violin, the recording ends as it began, with an expansion of the opening compositional idea of a violin trill with a melodic line in the oboe from Dreamscape. Here it is heard as a coda to this thoughtful collection of music, engaged in equal measure with the fine details of musical sound, a narrative approach to structure, and a wealth of extra-musical sources of inspiration.