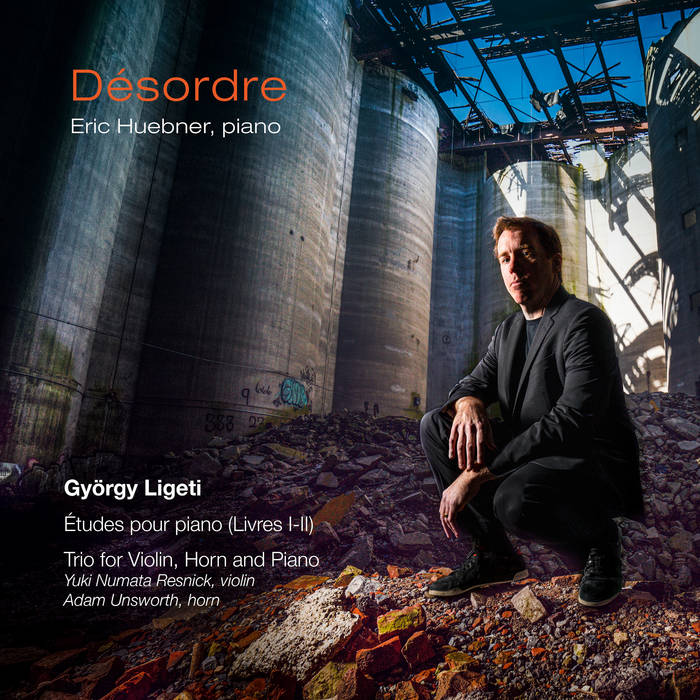 Pianist Eric Huebner’s virtuosic release of Ligeti’s iconic etudes alongside his Trio for Violin, Horn, and Piano underscores the composer’s restless nature and attraction to various sources of aesthetic inspiration. Throughout the 1970s—after fourteen years in exile—György Ligeti made a number of return trips to his native Hungary. He had hoped to rekindle a relationship with the musical community of his homeland and reestablish himself as a ‘Hungarian’ composer. By the end of the decade, though, these efforts fizzled out, coinciding with a prolonged bout of illness and a fallow creative period. The works on this disc—the Études pour Piano (Livres I-II) and the Trio for Violin, Horn, and Piano (Hommage à Brahms)— followed this period of crisis in Ligeti’s life and marked a decisive stylistic shift in his output. This new style drew on, among other things, elements of neo-romanticism, alternate tunings and microtonality, curious flirtations with tonal harmony, Central European folk idioms, and a stunning diversity of non-Western traditions. The point was not his virtuosic ability to inhabit an array of contemporary and historical styles, but rather his inability to settle wholly in any one.

It could be said that Ligeti’s Horn Trio (1982) inaugurated this new trajectory both in its style and in its thematic inspirations. When the pianist, Eckart Besch, first approached Ligeti about composing a companion piece to the Brahms trio for violin, piano, and natural horn, the suggestion evidently sparked powerful associations. There are, for instance, well-documented personal associations for Ligeti between the sound of the natural horn and the alpenhorns he heard in the Carpathian Mountains as a child. In his Romanian Concerto of 1951, the natural horn solo of the third movement explicitly recalled these childhood memories. In the opening measures of Ligeti’s trio, the horn part bears an immediate resemblance to that earlier work. Furthermore, this horn melody unfolds over a skewed quotation, by the violin, of the ‘Lebewohl’ (“farewell”) horn call that opens Beethoven’s Piano Sonata, Op. 81a.

Ligeti named Chopin, Schumann, Scarlatti, and Debussy as primary influences in composing his first two books of piano etudes (1985-1994). Ligeti was by no means a virtuoso pianist, but he wrote his piano etudes at the keyboard and aimed to preserve that traditional sense of the genre as virtuosic technical study. In a playful subversion of the romantic pianist channeling musical ideas with sublime facility through a machine, Ligeti inserts his body as a faulty mechanical intermediary. Two machines—body and piano—engage in dialogue, producing unpredictable effects on the passage from thought to expression.

Non-Western elements also abound. As Ligeti writes,“[t]he polyphonic ensemble playing of several musicians on the xylophone—in Uganda, the Central African Republic, Malawi and other places—as well as the playing of a single performer on a lamellophone (mbira, likembe, or sanza) in Zimbabwe, the Cameroon, and many other regions, led me to search for similar technical possibilities on the piano keys”. Galamb Borong, by contrast, evokes the sound of a gamelan orchestra. Its Hungarian title, which translates rather absurdly as “ Melancholic Pigeon,” was likewise chosen for its supposedly Javanese sound.

The existential plight of being stuck between states with no place to call home is an apt organizing metaphor for these works. Looking past the dominance of machines, patterns, and inhuman systems, though, the piano etudes do make a certain kind of space for human presence. For instance, Ligeti paid much attention to the physical experience of playing these works, claiming that the “well-formed piano work produces physical pleasure” in the way that it choreographs the body. Indeed, for all their pyrotechnic glitz, Ligeti’s etudes lie remarkably well in the hands, allowing for a surprising degree of expressive freedom. If a recurring theme here has been the cataclysm between imagined ideals and the failure of their realization, it nevertheless seems that something unforeseen is able to glow into life above the wreckage. We might say that this is music about finding moments of comfort for oneself in an inhospitable world: an increasingly virtuosic feat. These studies, in other words, think pianistically about displacement and refuge. For this reason, they remain not only contemporary, but also utterly timely.