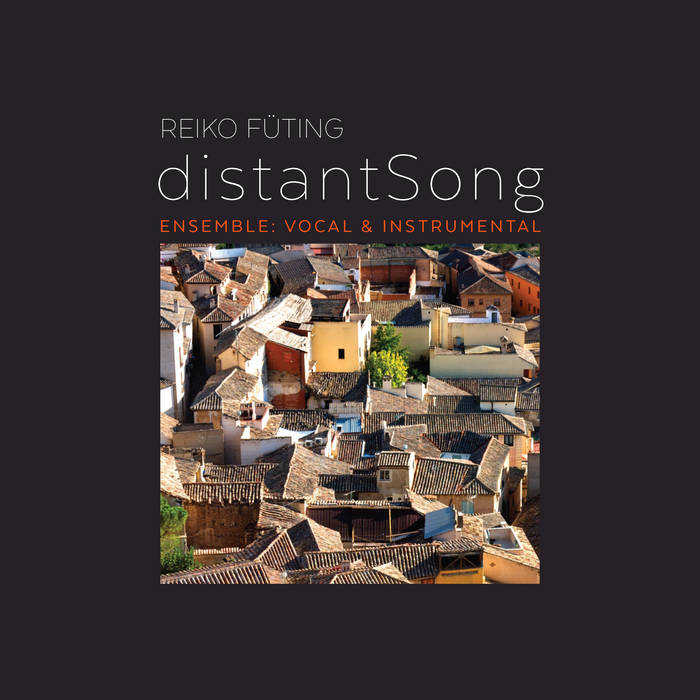 Composer Reiko Füting’s music engages with temporality and memory on a multi-dimensional level. By using musical quotation and balancing current instrumental techniques with early music stylistic traits, Füting invites the listener to reflect on a musical tradition through a contemporary prism. Through his innovative approach to structure, internal repetition, and additive motivic content, Füting shapes the listener’s perception of musical time. He writes in the liner notes that, “The quotations are treated to processes of assimilation, integration, disintegration, and segregation while moving freely between clear borders and gradual transitions. Among my interests in this structural approach was to construct a musical forum to reflect upon contemporary artistic, cultural, social, and political phenomena.” “Distant Song”, Füting’s second release on New Focus, features works for voices and instruments performed by excellent established young ensembles in both the United States and Europe. The compositions included are emblematic of Füting’s deeply humanistic approach to creative activity and a sensitivity to contemporary political issues.

The opening two works on “Distant Song,” are based on pieces written during the 30 years war by Baroque composer Heinrich Schütz in which he called for peace. Füting’s choice to score the works for a stylistically hybrid instrumentation of percussion quartet, gamba consort, positiv organ, and vocal ensemble facilitates his duality between new techniques and older stylistic allusions. In both cases, the vocal ensemble acts as the temporal bridge between the percussion and the gamba quintet — quotations from Schütz’s choral music and lush layering of voices alternate with consonants that get stuck like a record skipping, glissandi that swoop and destabilize the texture, and dynamic swells.

eternal return (Passacaglia) was written for soprano Corrine Byrne and trumpeter Andrew Kozar, and is reflective of Füting’s affinity for repetition within motivic development. Little machines of rhythmic and timbral activity become familiar to the ear before they are added to or subtracted from, as threads of memory accumulate or disintegrate in the mind before being replaced by new thoughts. A Nietzsche quote lamenting human nature's penchant for repeating historical mistakes serves as the text.

mo(nu)ment for C, for the ensemble loadbang, opens with sounds in the winds that mimic the baritone voice. The insistent pulsation eventually expands into short bursts of repeated notes as the text alternates between “Je suis”, “I am,” and “Ich bin”, an assertion of the autonomy of the individual in response to the attack on Charlie Hebdo in 2015.

Weg, Lied der Schwäne (Journey, Song of the Swans) was written for the Dutch ensemble Oerknal, and returns to the early/contemporary music dichotomy of the opening two pieces, with material based on a Jakob Arcadelt madrigal. The piece has a quasi-spectral sensibility of articulating overtones over a harmonically static bass note. Towards the end of the piece, we hear the madrigal in fragments percolating through the ensemble.

The final work, versinkend, versingend, verklingend: fernes Lied (sinking, singing, sounding: distant song), brings the recording full circle, scored again for ensemble with voices, this time Oerknal with Netherlands based vocal ensemble Damask. Füting’s inspiration here is the famous Debussy piano prelude “La cathédrale engloutie”, with a quote from a 15th century German folk song in the coda. Throughout this inward looking recording, Reiko Füting patiently weaves a beguiling tapestry of textures across a multi-layered structure, expanding the listener’s perception of time and engaging with memory and the musical past in an era of change, uncertainty, and transition.