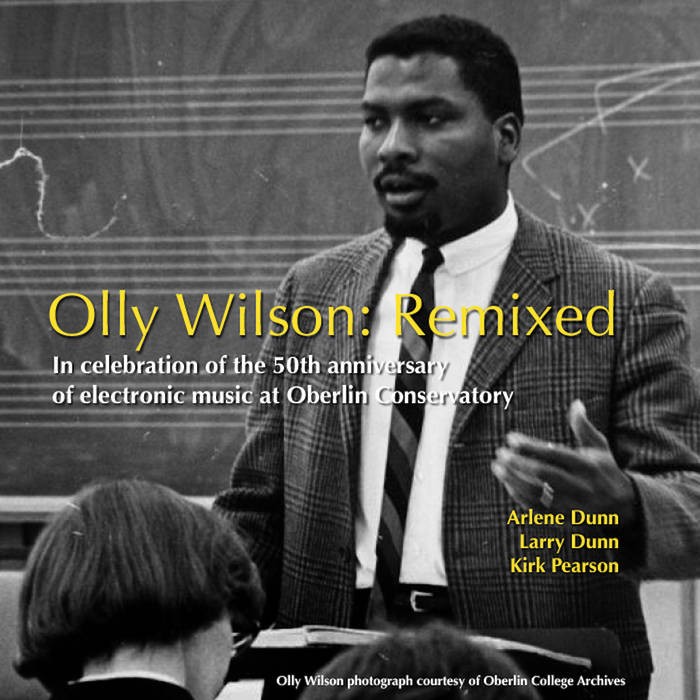 Olly Wilson: Remixed was released by Arlene and Larry Dunn, with their collaborator Kirk Pearson, to raise money for freelance music artists who are suddenly deprived of their livelihood by the COVID-19 pandemic. As of June 1, 2020, 100% of the proceeds from this release will be donated to the Jazz Coalition, a collective of jazz industry musicians, professionals, and supporters, which has created a Commission Fund to help keep artists in the global jazz community active and compensated to create new work. Learn more at jazzcoalition.org. We have listed this release at a low $4.00 so that nearly anyone inclined to give is able to do so. But we urge you to pay whatever you can comfortably afford. You can also make a tax-deductible donation on the Jazz Coalition website.

Olly Wilson: Remixed was created as a tribute to composer and musicologist Olly Wilson (1937-2018), an Oberlin Conservatory professor from 1965 to 1970, in celebration of the 50th anniversary of the advent of electronic music at Oberlin, for which he was directly responsible. In 1969, Wilson and his colleague John Clough obtained a grant to purchase equipment needed to teach electronic and computer music classes. Their pioneering work evolved into Oberlin’s TIMARA (Technology in Music and Related Arts) degree program.

Olly Wilson: Remixed is a spoken text + fixed media work for two (or two groups of) voices and a diffused soundscape. The work consists of four movements: I. Black Music as an Art Form, II. Musical Electrons, III. In Oberlin, IV. Composing While Black. Arlene and Larry Dunn created the text score by extracting phrases from works by Olly Wilson, and from transcripts of interviews with him. Kirk Pearson (OC ’17) designed the electronic soundscape.

The sound design synthesizes Wilson’s fascination with electronic media with the voice of Wilson himself. Through a variety of unconventional (principally analog) techniques, Pearson used the recording studio as an instrument to transform auditory artifacts of Wilson's legacy into a variety of soundscapes that complement his philosophies, as portrayed in the texts of the piece. Movement by movement, Wilson’s speech and music transform into shortwave radio transmissions, electric charges that fly across the audience, the buzzing and chirping of Ohio's natural environment, and a literal interpretation of the myth of Cetus (just to name a few). Within the unique Kaleidosonic 15-channel array, for which the piece was initially designed, Finney Chapel was sonically morphed into a wide variety of interpretive spaces—from the Oberlin arboretum, to the inside of an AC power cable, to a model of the human brain. Of particular fascination to Pearson is just how well Wilson’s personal credo about music and those who make it extends into his philosophies about electronic media. In some sense, the piece is a meditation on the plasticity of both recorded sound and musical culture.

Olly Wilson: Remixed was premiered by Arlene Dunn, Larry Dunn, and Kirk Pearson at the Kaleidosonic Music Festival in Finney Chapel, Oberlin College, on November 16, 2019. This stereo release uses audio recordings of the vocal tracks made in the TIMARA studio at Oberlin Conservatory and electronic tracks created at Dogbotic audio lab in Berkeley, CA. The final recording was produced, mixed, and mastered by Dogbotic.

Olly Woodrow Wilson, Jr. (1937-2018) was an American composer, pianist, double bassist, and musicologist. He was one of the preeminent composers of the 20th and 21st centuries. A native of St. Louis, MO, he showed a keen talent for music at an early age. He attended Washington University, earning his B.M. degree in music in 1959. Wilson went on to earn his M.M. degree in music composition from the University of Illinois. In 1960, after receiving his master’s degree, Wilson began his teaching career at Florida A&M University. After two years, he returned to school at the University of Iowa, earning his PhD in 1964. Wilson returned to teach at Florida A&M for one year, before accepting a position at Oberlin Conservatory in 1965, where he taught for five years. During that time, he was instrumental in establishing what later became the TIMARA (Technology in Music and Related Arts) program at Oberlin, a pioneering accomplishment as the first-ever conservatory program in electronic music.

In 1970, Wilson joined the music faculty at the University of California, Berkeley. He received a Guggenheim Fellowship in 1971, and moved to West Africa to study African language and music firsthand, returning to UC Berkeley in 1972. Wilson served as chair of the music department from 1993 to 1997 and held the Jerry and Evelyn Hemmings Chambers Professorship in Music from 1995 to 1998. He retired as professor emeritus in 2002.

A profoundly skilled composer, Wilson’s compositions range from electronic music to works for chamber ensembles and orchestra, and they have been performed around the globe. He was commissioned by Black Music Repertory Ensemble, New York Philharmonic, Boston Symphony, Chicago Symphony, Boston Musica Viva, National Endowment for the Arts, Koussevitzky Foundation, and many others. In addition to his teaching and composing, Wilson was an acclaimed scholar who wrote many articles in academic journals, primarily on the aesthetics and politics of African and African American music

Wilson won numerous awards and prizes throughout his career, including the Dartmouth Arts Council Prize (the first international competition award for electronic music, for his work Cetus, in 1968), two Guggenheim fellowships (1971, 1977), the Elise Stoeger Prize from the Chamber Music Society of New York (1992), election to the American Academy of Arts and Letters (1995), and the Rome Prize (2008).

Arlene (she/her) and Larry (he/him) Dunn are pure amateurs of adventurous music in a broad range of styles and practices. They avidly follow, support, and promote many music ensembles and artists. They are Contributing Editors for I CARE IF YOU LISTEN, the online journal of contemporary music, and audience-perspective bloggers (and occasional performers) for International Contemporary Ensemble (ICE). Arlene and Larry are founding members of the Advisory Board of New Music New College in Sarasota, FL. Larry is a former trustee and current Advisory Board member for the Northern Ohio Youth Orchestra (NOYO). In celebration of their 50th wedding anniversary, they recently endowed the Arlene and Larry Dunn Composer in Residence chair at NOYO, which is awarded each season to an Oberlin Conservatory student composer from a marginalized community.

Kirk Pearson is the founder of Dogbotic, an audio research lab in Berkeley, CA, where creative-driven inquiry meets inquiry-driven creativity. A graduate of Oberlin College and Conservatory, Kirk has written music, built installations, and designed experiences for the New Museum, the American Museum of Natural History, Museum für Kommunikation Bern, and for hundreds of films, stage productions, and new media projects. In 2017, he was a recipient of a Thomas Watson Fellowship, through which he spent a year traveling the world composing works for experimental instruments.

Selections of the audio recordings of Olly Wilson oral history interviews conducted by the Regional Oral History Office, The Bancroft Library, University of California, Berkeley, were micro-sampled and electronically manipulated for the ​Olly Wilson: Remixed​ soundscape.

Thanks to Tom Lopez, Associate Professor of Computer Music and Digital Arts and Chair of TIMARA at Oberlin Conservatory, for so graciously inviting us to participate in the Kaleidsonic Music Festival to celebrate TIMARA’s 50th anniversary.

Thanks to clarinetist Joshua Rubin (OC ‘00) of the International Contemporary Ensemble, for first introducing us to Olly Wilson’s music by including his composition ​Echoes​ (for clarinet and electronics) on his 2014 album ​There Never is No Light​ (New Focus Recordings).

Thanks to Fredara Hadley, former Visiting Assistant Professor of Ethnomusicology at Oberlin Conservatory (now teaching at The Juilliard School), and Chris Jenkins, Associate Dean for Academic Support at Oberlin Conservatory, for enlightening us on the important role Olly Wilson played in instituting the study of African American and African music at Oberlin.

Special thanks to William Quillen, Acting Dean of the Oberlin Conservatory, and Sally Takada, Major Gifts Officer, Development and Alumni Affairs, Oberlin College and Conservatory, for supporting our initiative to create an annual Olly Wilson Prize by establishing the TIMARA Founders Fund, and to everyone who has contributed to this fund.