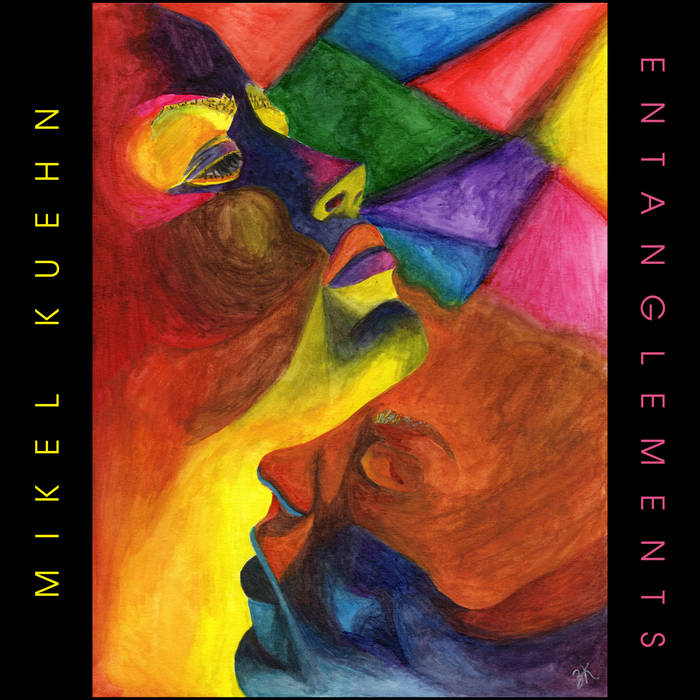 Mikel Kuehn’s music possesses a finely cultivated balance between systematic rigor and variable freedom in the realization of a score. Carefully curated structures and aleatoric structured improvisation passages (a byproduct of Kuehn’s background in jazz) ultimately explore possibilities revealed by an instrumental texture, expressive context, or dialogic relationship. The seven works on this album are all duos, either between two live instruments or between instrument and electroacoustics. Across three works on this recording, Mikel Kuehn establishes a systematic character matrix — an organization around a collection of paired musical states. Kuehn’s strategy represents an interest in considering musical relationships exhaustively, from many angles. In this way, Kuehn seems to take an obliquely post-modernist stance — there is always another way of seeing.

In his program note for "Entanglements," Mikel Kuehn cites Einstein’s “spooky action at a distance” concept from quantum mechanics as one of his sources of inspiration for the work. All of the various permutations of character pairings combine and collide in the course of the piece, as the instruments and their expressive states act upon each other. The other source of inspiration for "Entanglements" is more tactile — the instrumentation of harp and guitar conjured an image in Kuehn’s mind of an entanglement of wires, from headphones or other audio cables.

"Table Talk" for violin and viola (2018) explores Kuehn’s matrix from a more explicitly programmatic perspective — it depicts a conversation between two strangers at a dinner table, investigating the myriad poses two people can take in dialogue with each other. For much of the piece the “conversation” flows fairly smoothly, with one line expanding on an idea as the other supports it with a quasi ostinato or interlocking rhythmic figure. Texture changes often, as if this is a couple who is trying out several different ways of interacting to see what works.

"Chimera" (2017) is the longest of the “spooky action at a distance” trilogy and features the most contrasting pair of instruments, flute and piano. This time Kuehn’s character matrix is mapped onto the Greek mythological creature of the title, a fire breathing female monster made up of a combination of a lion, goat, and serpent.

While it is not structured within this character matrix, Kuehn’s electroacoustic setting for soprano of Wallace Stevens’ "Thirteen Ways of Looking at a Blackbird" would seem to be an apt elucidation of this quasi-Cubist component of Kuehn’s aesthetic. Stevens’ poem about seeing a subject from thirteen distinct angles is appropriately episodic in Kuehn’s rendition— each new short “way” of looking at the blackbird triggers a new texture and relationship between the singer and the spatialized, fixed media component. Soprano Deborah Norin-Kuehn beautifully navigates a vocal line that migrates from standard singing to sprechstimme, and from nearly monochromatic chanting to dramatic intervallic leaps.

While the remaining three works on the album are not organized around this character permutation technique, they share Kuehn’s penchant for a presentation of discrete textures and ideas. "Colored Shadows" and "Rite of Passage" are both part of Kuehn’s series of electroacoustic works with live processing (and optional fixed electronics versions) titled "Hyperresonance." In both, he includes sections that feature structured improvisation as a way to balance the through composed material and create a unique space for the interaction between performer and electronics in the moment. In "Colored Shadows," Kuehn carves out four improvised sections that anchor the piece, each focused on one of the viola’s open strings. "Rite of Passage" (2014) for bass clarinet and electronics directly tackles the well known excerpt from Stravinsky’s "Rite of Spring." Stasis and animated forward motion stand in relation to each other, balancing the impulses of direction and suspended time.

"Double Labyrinth" (1999) is the oldest work on the album and embodies a different point in the evolution of Kuehn’s style. He establishes a set path for each instrument, framed by a series of recurring harmonic and motivic collections. The two instruments are set loose within this “labyrinth,” occasionally converging along their paths; midway through, they switch routes of navigation.

Mikel Kuehn’s works on this album demonstrate a composer who curates rich musical worlds through systems and sonic environments. The character matrix works share a structural conceit but each is guided by its own unique programmatic concepts and the intricate details of the relationship between instruments. Notational freedom and variability are powerful tools used in three of the pieces that open up a kaleidoscope of outcomes shaped by the given material and context. In this way, Kuehn places himself firmly in the 21st century, an era where certainties of monolithic truths and careening directionalities are challenged at every turn by an awareness of contrasting ideas.