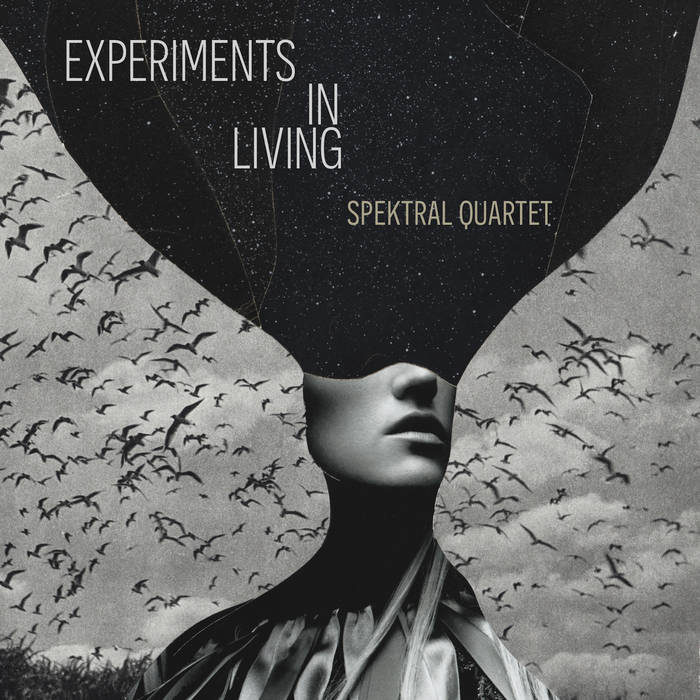 steve dollar Been listening to this nonstop since it came out. Superb intro to the quartet, and also thrilled to discover Charmaine Lee. Loved your whole concept with the tarot cards, the art, the juxtapositions ... Really creative approach!

This album will never be heard the same way twice. Do you remember the Choose Your Own Adventure books? “If you approach the mysterious stranger, turn to page 48...If you duck into the forbidden cave to avoid them, turn to page 136,” etc. There was a thrill to the equal possibilities of adventure or capture, friendship or deception, renown or obscurity.

Experiments in Living is the musical analog, and one where your listening experience will change profoundly based on the choices you make at each fork in the road. While routes through the record can be ever-changing, this double album flows along two currents often segregated in concerts outside our own. Part One pursues three historic innovators and singular voices circumventing the entrenched rules of their time – Johannes Brahms, Arnold Schoenberg, and Ruth Crawford (Seeger) – while Part Two pitches through passageways of music motivated by jazz, improvisation, and experimentation by way of composers Anthony Cheung, Sam Pluta, Charmaine Lee, and George Lewis. Finding the provocative connections between them is what defines our work together.

This record is not about drawing a linear path through history. It is a constellation of musical voices – one in which unapologetic personal expression is the unifying theme.

More importantly, though, it is a celebration of individuality – one that embraces tradition without being inhibited by it. Like the concept proffered by John Stuart Mill from which the album takes its title, the “freedom” found within these “experiments in living” is a result of making choices without blind acceptance for the way things are or have been. Some large percentage of the classical-music community may argue that the pieces on this album don’t belong together. We beg to differ.

Listeners may encounter this record in whatever way they are inspired. Moving sequentially will create a compelling journey from Romanticism to Modernism to Jazz to The Uncategorizable. But for those feeling adventurous, we’ve also fashioned a tarot deck of sorts that brings chance into the experience, and rely on your deep listening to build bridges – literally – between these polychromatic sound worlds.

What awaits you is the first quartet of Johannes Brahms, a composer that Schoenberg considered as harmonically adventurous as Wagner, and one whose voice held out against a hurricane of criticism. Then there’s Schoenberg’s own third quartet, a piece inseparable from Schubert (and Mozart and Beethoven), but that also jail-breaks the entirety of classical music composition.

And what about Ruth Crawford (Seeger)’s String Quartet (1931)? Here we have a composer cutting through the patriarchy to write one of the only quartets of its kind till, maybe, Elliott Carter 20 years later.

Or maybe you’ve leapt right to George Lewis’s ecstatic String Quartet No. 1.5, “Experiments in Living.” There is an extemporaneous flare and even a seeming chaos at times within this music, but on further reflection, an architecture emerges from the mist – not unlike the sometimes bewildering experience of hearing Arnold Schoenberg’s String Quartet No. 3 for the first time. Amidst all its energizing spontaneity, clear and bracing alliances are formed in twos, threes, and fours.

The exuberance popping off within the Lewis finds a parallel in Sam Pluta’s binary/momentary logics: flow state/joy state, which whips the players through breakneck character changes with titles as sober as “Professor Dr. Squiggly, DMA.” As both composers prove, the most challenging music on the page can also be absurd, and hilarious, and fun.

Composer Anthony Cheung provides a genre bridge with his cheekily-titled Real Book of Fake Tunes, in which whiffs of jazz harmonies infuse spontaneous-sounding licks from flutist Claire Chase and our foursome. And finally, Spinals, our fully improvised collaboration with vocalist Charmaine Lee, offers the most interstellar departure from traditional classical music, fusing other-worldly reverberations of the human voice with the kaleidoscopic palette of the string quartet.

There are many paths through this album, but this is your adventure, friend. We wish you good fortune…


A wealth of stimulating resources await you on our website: spektralquartet.com/experiments-in-living