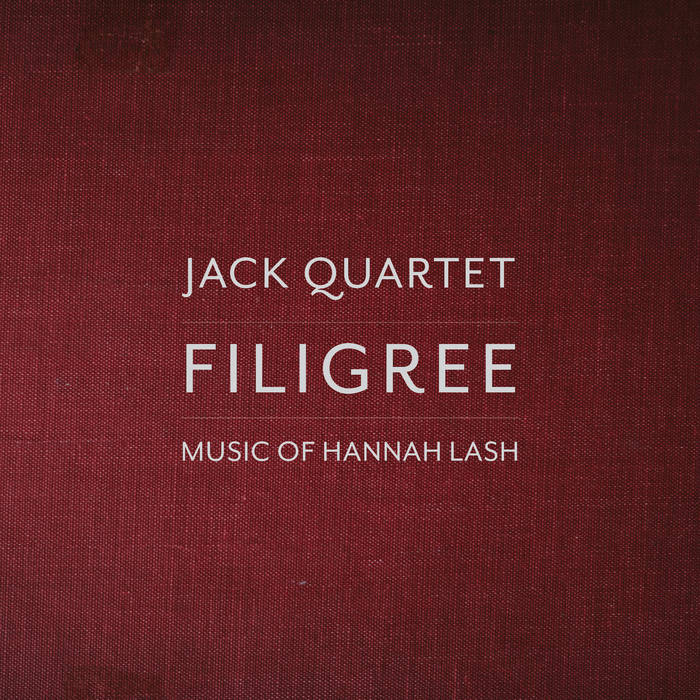 Hannah Lash’s multi-layered music balances rhetoric with sensuality and enters into a dialogue with pre-existent forms while simultaneously reexamining them. On this excellent recording of her music for string quartet by the JACK Quartet, we hear Lash’s engagement with two canonic traditions as points of inspiration (the Baroque Suite as well as an extra musical discipline — tapestry arts from the Middle Ages), alongside two works that concern themselves with instrumental and musical phenomenon.

Frayed opens with sighing chords, breathing through the quartet like a series of inhales. The passage is performed with mutes on, lending it a covered sound, almost like a delicate harmonica. The accumulated energy eventually explodes into vigorous music before material from the opening is re-integrated, toggling back and forth between contrasting energies. As the work evolves, “frayed” edges of each expressive world begin to show—overpressure on the culmination of a repeated chord, a hybrid gesture of pizzicato and glissando articulated with the back of the frog of the bow.

Suite: Remembered and Imagined takes a traditional Baroque Suite as a jumping off point for Lash’s reinterpretations. The opening “Allemande” presents jaunty lines at different speeds simultaneously, with an aural illusion of the second violin playing at a different tempo than the others. Each line on its own captures the genteel propriety of the German dance, but together they are heard as if through a distorting prism. Echoes of the opening of the Prelude from Bach’s C major cello suite begin the “Courante,” as the four string instruments complete each others’ scalar passages, weaving together a harmonic progression that moves easily between keys. An insistent high register pedal point on the original tonic enters midway through the movement, framing the subsequent passagework in terms of its relationship to the home key. A brooding “Sarabande” follows, marked by closely spaced, dense chord voicings.The language is reminiscent of early 20th century Romantic string quartets, with the short-long rhythm characteristic of a traditional “Sarabande” asserting itself throughout. In a Suite that has a fair share of light hearted humor and irony, this movement stands out for the weight of its expression. The playful “Gavotte” opens with an ascending pizzicato line — the other instruments occasionally highlight individual notes by doubling them in harmonics at the octave. Later in the movement, violin trills fulfill the same function, but they are pitched slightly lower than the main pizzicato line, sounding as if they are sung by a singer whose voice has seen better days. The off-kilter “Gigue” features short chromatic phrases in a violin part that seems to constantly be interrupting itself. The final movement, “Minuet antique et fragile,” is played entirely pizzicato, in a rhythm that skips and swings gently, closing the Suite not with a grand gesture, but instead with a sly wink.

Pulse-space pits beatings that result from dense, closely spaced voicings against the pulsing created by bow changes in the ensemble. Individual instruments in the quartet emerge briefly from the prevailing repeated pattern, either to play an intense sustained line on top of the other three, to weave a fragmented line within them, or to superimpose a new rhythmic layer. The relentless work culminates in a section of impassioned sustained notes played by the whole quartet, each instrument voice leading to a new pitch in a dramatic chorale texture.

Lash joins the JACK on harp for Filigree in Textile, a three movement work inspired by tapestry arts from the Middle Ages. The first movement, “Gold,” opens with a mournful cello solo, and features intricate imitative counterpoint. Through this disciplined treatment of the motivic material, Lash draws a parallel between the rigors of the craft of tapestry making and early compositional technique.“Gold” closes with a pizzicato passage, leading gracefully into “Silver” which remains pizzicato throughout, neutralizing the bowed strings and placing them in the same world of articulation as the harp. This middle movement is in rhythmic unison throughout, a “formal and somber dance” as Lash describes it, with a bell-like middle section wherein harmonics move from a secondary embellishing role to a primary function as the main timbre. The final movement, “Silk,” is a moto perpetuo tour de force for the harp, who glues the ensemble together with a percolating line of running lines and pointed accents. The quartet snakes along behind Lash, taking her suggestions of goal notes shortly after she articulates them, as she traces the threads of this musical tapestry.

Hannah Lash’s compositional voice is an important one in our contemporary scene. Her aesthetic integrates elements from the canonic repertoire with a keen sense of the expressive power of experimental techniques within a largely conventional sound world. The JACK Quartet’s performance of these pieces takes full advantage of their versatility, presenting them with intelligence and sensitivity to Lash’s cultivated language.

Funded in part by The Aaron Copland Fund for Music, Inc.