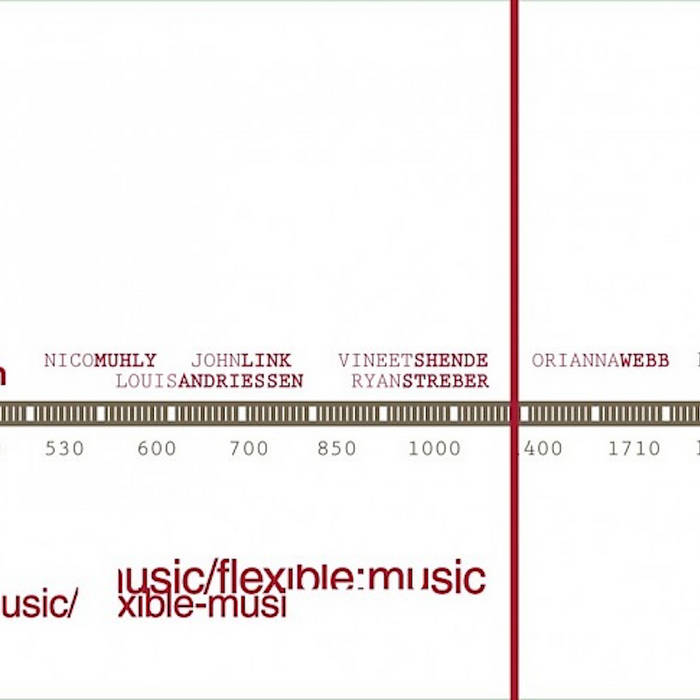 This debut full length recording from NYC based new music quartet Flexible Music (Haruka Fujii, Eric Huebner, Daniel Lippel, and Time Ruedeman) features six works that have helped to define the group's sound. Inspired by Andriessen's iconic canon, Hout, Flexible Music has commissioned and premiered over thirty new works for their instrumentation of guitar, piano, sax, and percussion, five of which are featured on this recording (by Nico Muhly, Ryan Streber, Orianna Webb, Vineet Shende, and John Link). The FM sound that has developed through these pieces eludes easy categorization, but it is characterized by tight rhythmic energy and meticulous ensemble coordination.
Many of the pieces juggle some aesthetic dichotomy that pulls the composer in different directions. Nico Muhly's Flexible Music, which gave ensemble its the name, is inspired by characterful video game music and minimalism, managing the tension between the two through variable repetition. John Link's Around the Bend playfully dances through rhythmically coordinated ensemble mechanisms, while balancing Link's Carter infused language with his penchant for extending expansive harmonic areas through quasi-minimalist fortspinnung. Blink and you may miss the quote from Verdi's Falstaff midway through the piece. Ryan Streber's Closing Time closes the gap between his teenage years as a blues guitarist and his compositional chops as a Babbitt student with an intricate work that alternates between sections of timbral blending with sections of virtuosic ensemble passagework. Orianna Webb's Sustenance Variations creates a macro-instrument out of the quartet, with the piano, percussion, and guitar articulating violent hits connected by saxophone and vibraphone swells. The structure of the work unfolds in fits and starts as well, dispensing with transitions and opting instead for a quick change style of sectional contrast, almost akin to changing channels on a television. Vineet Shende's Throw Down and Shut Up is at once an hommage to Jonathan Harvey's Messiaen inspired rhythmic organization and James Brown's earthy funk. Featuring each of the members of the ensemble in solos, Throw Down is a virtuoso piece that is meant to be tossed off as easily as the Mashed Potato.

"The quartet known as Flexible Music derives its name from the title of the Nico Muhly piece that the group plays on its new disc. Like that score, the programme's other works by Louis Andriessen, John Link, Ryan Streber, Orianna Webb, and Vineet Shende take percussion, piano, saxophones, and guitars through fascinating textural, rhythmic, and colouristic terrain. The results are varied and vital, a feast of intimate musical possibilities. The disc's springboard is Andriessen's beguiling Hout, which has been recorded by several other ensembles. Dutch for "wood", the piece is a canon that finds the instruments chasing each other at pell-mell speed, occassionally stopping in their tracks amid the hypnotic activity, sensual gestures and group exclamation points. Muhly's Flexible Music is exactly that. Inspired by video games, its energy is relentless, with swirling, punching ideas momentarily relaxed with lyrical lines. In Link's Around the Bend, something surprising is always lurking, from exotic tambourine sighs to quickly shared fragments, dreamy piano lines and sudden outbursts. An electric guitar broods in Streber's Closing Time, which is animated through saxophone flights and feisty interaction. Tidbits emerge from hushed moments, and the saxophone and guitar have extended solos before the music fades away. The aura veers from the frisky to the still in Webb's Sustenance Variations, whose punchy chords and confrontational episodes find a keen balance amid lines of haunting poetry. Shende pays homage to James Brown in Throw Down or Shut Up, whose vigorous activity includes vocal grunts, riffs, shifting rhythms and a sassy finish. The members of Flexible Music are undaunted by the repertoire's formidable demands. Haruka Fujii (percussion), Eric Huebner (piano), Timothy Ruedeman (saxophones), and Daniel Lippel (guitars) appear to relish the sense of discovery that these composers have invested in their captivating creations."
-Donald Rosenberg, Gramophone August 2009

"Part of the 21st century D.I.Y. new music mantra has been to turn the page on tired, old school instrumental combinations like the string quartet, the brass quintet, or the woodwind quintet. Hell, even Pierrot ensemble is starting to feel a little passe. Sure, they are still around, and composers will continue to write music for them because even though those types of ensembles might be listed in the "been there, done that" category, they are also tried and true. But it seems like new music composers and performers these days are looking for something different. Something edgier. Something that captures the spirit of the music they grew up listening to; be it The Beatles, Debbie Gibson, or Nine Inch Nails, et al... not necessarily the music they were taught in their music history classes and composition lessons. One need only take a quick look around the current new music landscape to see the effects of popular music on the work of a new breed of composers who have embraced it equally alongside their conservatory training. But yet for all of the borrowing from pop music new music professes to be engaged in, the one-hit wonder is something that hasn't quite caught on yet. So whether an upstart ensemble with a limited repertory sinks or swims depends wholly on what new compositions they are able to generate for their group. This is the path the members of Flexible Music, a young and vigorous New York City-based quartet, have chosen for themselves. Aggressiveness, virtuosity, and seamless ensemble playing are obviously Flexible Music hallmarks, and these strengths are revealed immediately with a blistering account of Louis Andriessen's Hout, the piece that one imagines was the catalyst that brought the quartet together. While calling any work a tour de force may seem terribly cliche, it's really the only term that aptly describes Hout. It's a relentless piece, beginning with what seems like a never-ending canon at the 16th note. From there, the work never really lets the ensemble take a breath, but the players of Flexible Music handle the music's technical and ensemble demands so well that they seem like the musical equivalent of deep sea pearl divers. On an album dedicated to introducing us to Flexible Music and showing off the breadth of the group's abilities, Hout displays a monolithic quality that seems to have wielded a tremendously powerful influence over each composer's approach to writing for the ensemble. Works such as Vineet Shende's Throw Down or Shut Up and Ryan Streber's Closing Time use many of the same devices -- virtuosic instrumental writing and tricky composite line ensemble pass-offs that make Hout so successful, even if the composers' language is different. And Orianna Webb's Sustenance Variations, though given to fleeting moments of repose, is never far away from the aggressiveness that permeates the entire album. Of the new works written for Flexible Music included on the disc, John Link's Around the Bend does the best job of exploiting some of the more unique color combinations of the ensemble. In the present new music milieu of countless oddly staffed ensembles, Flexible Music has one of the more exciting combinations of instruments and probably one of the most, um, flexible out there in terms of their ability to capture such a broad range of sounds and styles. And with what appears to be a stable of many willing and able composers and over 30 commissioned works to their credit so far, they don't appear in danger of becoming a one-hit wonder. But as the group moves forward, they should work to expand their range and embrace their namesake so as not to become a one-trick pony."
—Brian Sacawa, New Music Box, August 2009