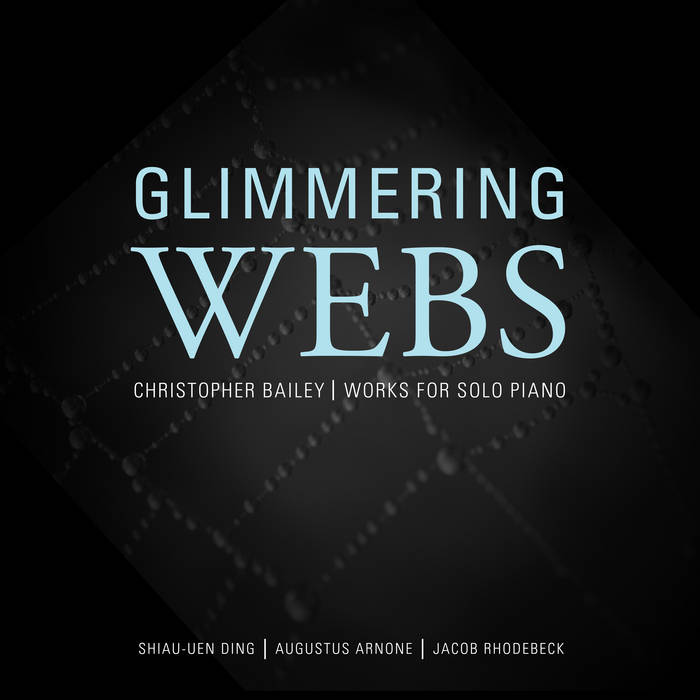 Christopher Bailey’s “Glimmering Webs” is a comprehensive collection of his piano music written between 1993 and 2013 and displays several threads of influences and interests, from avant-garde modernism to irreverent pastiche and ambient sonic beauty to gleeful silliness. Some composers cultivate a singular focused voice that you can immediately recognize as soon as you hear it. Others are more restless, finding themselves drawn to several different aesthetics and excavating diverse voices within themselves. Bailey is in the second category, yet a clear voice emerges despite his omnivorous stylistic appetite. His music demonstrates a penchant for deconstruction and irony (witness “Fantasy-Passacaglia after Hall and Oates”, employing a compositional approach that Bailey calls “minimalism as a way into maximalism”, as applied to a typical chord progression from the 80s pop duo) paired with the romanticism and sensuality of ambient music (best demonstrated by the twenty minute long Brian Eno-esque “Meditation”, a deeply immersive work for piano and live processing). The overall result is that this two cd collection, performed with precision and elegance by New York based pianists Shiau-Uen Ding, Augustus Arnone, and Jacob Rhodebeck, encompasses a wonderfully balanced expressive range, from melodrama to humor, and from rhetorical compositional argument to deeply felt emotional music.

Bailey’s “Composition for Sh!$$y Piano” engages with his interest in indeterminacy; the piece essentially embraces the unpredictability of sub-par pianos and makes that characteristic its core parameter. In this spirit, much of the piano part is written in graphic notation instead of designating specific pitches, acknowledging the reality of crappy pianos -- you never know which pitches will have problems. The inclusion of the musique concrete materials in the electronic part lends a tinkering quality to the sound world, as if we have found ourselves in a musical workshop.

Neo-classicism also plays an important role in Bailey’s work, particularly in the monumental “Piano Sonata,” which features an extended variations second movement and various experimental approaches to the classical structure of Sonata form. The last work in the two cd set, “Ditty”, also employs a Classical rounded binary form, but filtered through 19-tone equal temperament tuning. In a way, this short piece is a perfect summation of Bailey’s work -- grounded in compositional tradition but attracted to experimentation, and presented with a healthy dose of wit, self-deprecation, and irreverence.