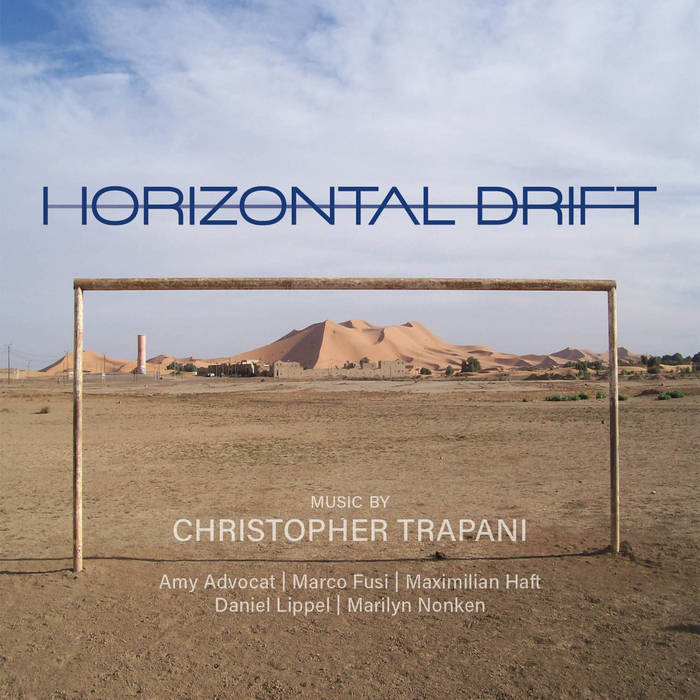 One of the consistent strains in Christopher Trapani’s work is his attraction to what one might call the archeology of sonic exploration. His interest in diverse music cultures as fertile territory to explore microtonality, timbre, and rhythm frees his music to pursue an essential expression beyond the conventional confines of concert composition. The works on Horizontal Drift zero in on this component of Trapani’s work, focusing on music he has written for unconventional instruments, some custom-made, others part of folkloric traditions typically found away from the concert stage. With the unique characteristics of these instruments as a frame, Trapani delves into a variety of tuning systems, from alternate fixed temperaments to just intonation, as well as a range of applications for electronics.

The opening work on the recording, Tārgul, is composed for the vioara cu goarna (“violin with horn” in Romanian), an instrument modeled after the stroh violin which was designed to help string instruments project for early recording technology. The vioara cu goarna has an edgy, brash sound, and Trapani leans into the character of its clarion call, peppering Tārgul with unsettling short glissandi, sighing gestures, dry pizzicati, and angular riffs. The electronics are played through megaphones at the sides of the stage, imitating the brittle timbral quality of the instrument.

The title track is written for quarter-tone guitar and a Max module called the LoopSculptor which allows real time manipulation of passages recorded in real time across several parameters. Trapani writes that the work was inspired by his hometown of New Orleans – indeed its languorous quality evokes the heavy, humid heat of the Delta and the paradox between the city’s timeless inertia and its constantly shifting topography. Trapani deconstructs some characteristic Delta blues guitar gestures – particularly grace note slides and hammer ons – to construct an otherworldly meditation enhanced by the quarter-tone pitch language and wafting electronic loops.

Linear A was written for a clarinet tuned to the Bohlen-Pierce scale, a microtonal system that repeats at the twelfth instead of the octave. Like the title track, the electronics are oriented around loops that manipulate the material played by the live performer. The instrumental material in Linear A exhibits a wide range from subdued to virtuosic, inward to extroverted. The flexibility of Trapani’s live electronics patch allows him to animate a soundscape with voices that create the illusion of independence, despite being generated from the same live sound source. This veneer of independence stands out even more so in relief when the final passage of the piece emerges, a four voice chorale harmonizing a wistful melody.

Lost Time Triptych was written as a companion piece to Gérard Grisey’s Vortex Temporum for piano scordatura, in which four pitches are detuned by a quarter-tone. The three movements of the piece, each with subtitles borrowed from Bob Dylan, examine three different temporal relationships in music that Grisey termed “the subjective layers of time.” The first is compressed, containing angular, stabbing chords. The second unfolds in “real” time, echoing the motivic play heard in Horizontal Drift, and ending abruptly. The third and final movement is spacious and resonant, inviting the listener to journey inside the exotic sonorities resultant from the detuned pitches.

Forty-Nine, Forty-Nine is the only work on the recording not performed by a human, though it is not strictly an electronic piece either. Instead, it’s a player organ piece, the 31 equal tempered Fokker organ to be specific, as controlled by a program called Open Music sending marching orders via Midi. Forty Nine, Forty Nine takes the deepest dive into microtonal theory on the album, organizing the work around highlighting the just intervals that the 31 EDO tuning system best approximates. The piece is dramatic and bracing, and evokes Nancarrow in its mechanical virtuosity.

Tessaræ returns to the bowed string sound world of Tārgul, this time featuring the viola d’amore, a unique instrument in the Western concert tradition due to its sympathetic strings. Trapani explores the connections with other bowed strings with sympathetic strings in other cultures in a work that engages with traditional music more than the other music on the album. Though no specific traditional restrictions are adhered to, we hear allusions to the drone textures and unfolding melodic exploration of Indian music as well as Turkish music, and a general restrained gestural vocabulary that conjures ritual music’s patient pace of development.

Support for this CD has been graciously provided by the Alice M. Ditson Fund, a YoungArts Microgrant, and by the generous supporters of a Kickstarter campaign.

All photos © Christopher Trapani, 2022 except page 2 photo by Katerina Duda