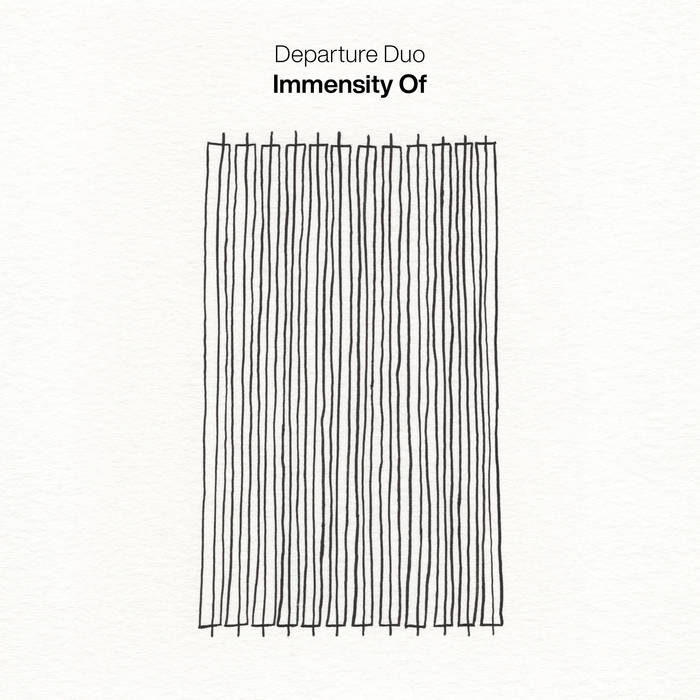 Departure Duo (Nina Guo, soprano, and Edward Kass, bass) releases their debut recording, Immensity Of, including works by Katherine Balch, John Aylward, Emily Praetorius, and György Kurtág. By featuring three works written for them alongside the work that formed their duo (the Kurtág) the virtuosic and adventurous duo calls attention to the precedent as well as the potential of this unique instrumentation that connects two poles of register and expression.

Soprano Nina Guo and bassist Edward Kass, appearing here as Departure Duo, carry serious new-music bona fides, both having performed with major contemporary ensembles on an international stage. As Departure Duo they are seriously committed to growing the repertoire for this unusual and highly expressive instrumentation.

For Phrases, composer Katherine Balch sets texts by Arthur Rimbaud. “Sets” isn’t completely accurate — her relationship to the texts is innovative and changeable; sometimes text is rendered as a simple setting, sometimes the text is torn apart in order to portray it more completely, sometimes the text is fragmented to such a degree as to be more like clay in the composer’s hands than actual words. She hews close to the saturated, arresting tone of Rimbaud’s images (violet flowerlets, a lone black wood, pink fire). Guo and Kass “speak” to one another in a vocabulary hovering among meaning, gesture, and pure sound. After the hot scramble of le haut étang fume, quand le monde sera réduit disarms with a pure and gently ornamented voice supported by a simple bass line rich in harmonics. It is a moment suspended in time, not needing to grow in any direction. j’ai tendu des cordes lives in pure rhythm, starting as a groove on its first three syllables that soon crumbles into syncopated and unpredictable rhythms and a descending bass line that drops out of the stomach. In the final song, il sonne une cloche, streaming vocal tones threaded through with bird-like passages are delicately held aloft by pale arpeggios from the bass, which simply floats away.

In Tiergarten (Zoo), John Aylward finds inspiration in three poems of Rilke, each about an animal with a powerful mythical history: the swan, the panther, and the unicorn. He lets each poem speak for itself, working with the rich images that the texts bring forth. In Der Schwan, Rilke’s texts contrast the swan’s awkward land-based tread against its well-poised and regal bearing in the water. The long, steady high notes in the voice are counterpointed by an endlessly turning harmonic glissando in the bass, a hidden moto perpetuo that makes the majestic presentation above the water possible. For Der Panther, Rilke imagines a powerful being alienated from his true nature. Aylward locks the musicians in a close dance, reedy double-stops and scratch tones rubbing against the smooth surfaces of the voice; a duo of intimate inter-reactions. He plays wonderfully against type in Die Einhorn (The Unicorn) — the bass accompanies the voice with mostly furtive staccato and pizzicato lines, articulating the notes with a broad spectrum of colors and expression, combining with Guo’s clear and luminous presentation to give remarkable ambiguity and depth to Rilke’s words.

Many of Lichtenberg’s aphorisms are humorous in nature and Kurtág audibly takes pleasure in this. In Die Kuh (The Cow), Kurtág uses an understated yet warbly, somewhat trippy voice, accompanied by the most delicate of pizzicatos, to relay that in Göttingen a woman once said, “In the time when our blessed cow was still alive.” For Die Kartoffeln (The Potatoes), Kurtág deploys masterful atonal first-species counterpoint to depict the somnolence of root vegetables awaiting spring. More seriously, Lichtenberg was an expert observer of human nature (as is Kurtág) and the sentiment behind ... und eine neue Welt … ( ... and a new world …) was likely controversial in Lichtenberg’s time. Kurtag’s rendering is daring on its own — he sets off the first two words with an audacious silence (fifteen seconds of a fifty-one-second piece!) and then completes the sentence with plain-spoken forcefulness. The whole piece is beautifully formed to set off the last syllable of “Entdeckung” with a playful (and rebellious) wink. In Verlorne Mühe (Effort in Vain), we feel too well the universal sensation of shame — the hot stab of a rolled “r” of “im Dunkel rot werden.”

Presentation can be a challenge with such short works, and so many of them (18 aphorisms, most less than a minute, the shortest being 15”). To foreground the connection between music and words, Guo and Kass take turns reading each brief text before its corresponding music.

The last work on the album is Immensity Of by Emily Praetorius. Enigmatic and arresting, the piece is dominated by achingly long glissandi in both instruments. The time scale is geologic — change turns slowly. It is a lonesome landscape, desertlike and depopulated. Whistling and birdsong, clucking mouth sounds and low, knocking pizzicatos appear and reappear, like hallucinations, but the interpretation can only be personal.

Mixed and Mastered by Joel Gordon and Departure Duo