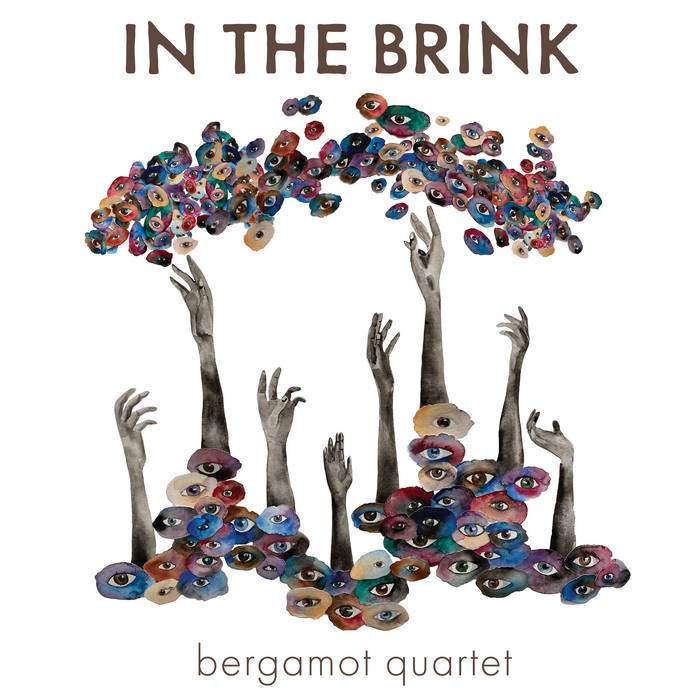 Bergamot Quartet releases its first full length recording with premieres by Suzanne Farrin, Tania León, Paul Wiancko, and Ledah Finck, who is also a violinist in the group. The critically acclaimed quartet merges a refined chamber music sensibility with a versatile and precise approach to contemporary scores, making a valued contribution to the repertoire with works that can be performed by new music specialists and generalized quartets alike.

In the Brink demonstrates an ensemble that is evolving the string quartet idiom from a strong grounding in its well established performance practice. The works included on this debut album from the group highlight their symbiotic playing style along with their versatility in realizing different expressive demands. All four works are heard in their premiere recordings, and represent significant contributions to the string quartet discography that are sure to make their way into the repertoire of other ensembles.

The metaphorical connection between music and textiles proves a fertile source of inspiration for Paul Wiancko’s Ode on a Broken Loom. Individual notes are like fibers, spun out to create a rich tapestry that takes on structural shape. The interrelationship between voices, or strands of material, is reinforced by imitative gestures between instruments. Wiancko’s loom is not thread with flimsy material — Ode on a Broken Loom is vigorous and physical, propelled forward by interlocking echoing phrases and syncopated accents. A disembodied melody is heard underneath quick swells in a contrasting middle section before the work turns towards a churning chorale, organum woven from strands pulled from the strings of the quartet. The vigor of the opening returns for a rousing conclusion, a garment that has taken its final form.

Tania León’s Esencia reflects her unique vantage point on music from different parts of the Americas, in particular from the Caribbean and Latin America. Elements of son, danzon, guajiras, and montunos animate three movements that marry León’s dynamic rhythmic writing with her colorful approach to harmony. León seems to toy with listener expectations, delivering an introduction to the opening movement, “Agua de Florida”, that suggests a disquisitive pace of unfolding before it is interrupted by energetic, swung lines. Languorous lyricism characterizes the middle section, lazily gliding between pitches with the casualness of summer heat. “Agua de Rosas” embeds melodies that echo the Andes mountains within flowing, layered textures. “Agua de Manantial” returns to the syncopations of the opening movement, highlighting vibrant rhythmic unisons and opposing rhythmic figures. A contrasting middle section hints at what León calls “Coplandesque harmonic overtones,” a nod to her adopted country of residence.

Suzanne Farrin’s Undecim engages with memory as a fragmentary process. Farrin imagined the stringed instrument bow as a conduit to repertoire from the past, referencing long gone pieces in a sort of archival mélange. Undecim grapples with the charged process of memory, holding on and struggling to let go. A final passage of harmonic glissandi offers a sense of release.

The final work on the album is Ledah Finck’s title work, scored for quartet plus drum set (Terry Sweeney). Finck was moved by the confluence of crises the world faces in our current moment. She deftly weaves vocalizations, sung, spoken and intoned, into a diverse musical context that includes driving moto perpetuo textures, angular, rhythmic figures that interact with the drumset, and sparse sonic explorations. The third movement, “Human Nature” opens with a chorus of scratch tones and over pressure techniques before launching into a torrent of sound that ascends in register. “Human Nature” elides into the fourth movement, “In the Brink,” with connective material — a chorale texture that hearkens to early music. After a contemplative moment of naturalistic sounds, the work establishes an interlocking rhythmic groove between drum set and hand claps. A call and answer passage between a cappella vocals and lush quartet chords leads into the final passage — an initially hopeful major chord pulsating with subdivisions that gradually detunes, ending the piece in a shroud of uncertainty befitting the manifold crises facing humanity.

In the Brink
Recorded and Mixed by Matthew Sullivan
Assistant Recording Engineer: Nicky Young
Produced by Paul Wiancko
Mastered by Sam Torres
With special thanks to Mike Tierney
Recorded at Reservoir Studios
Mixed at Power Station