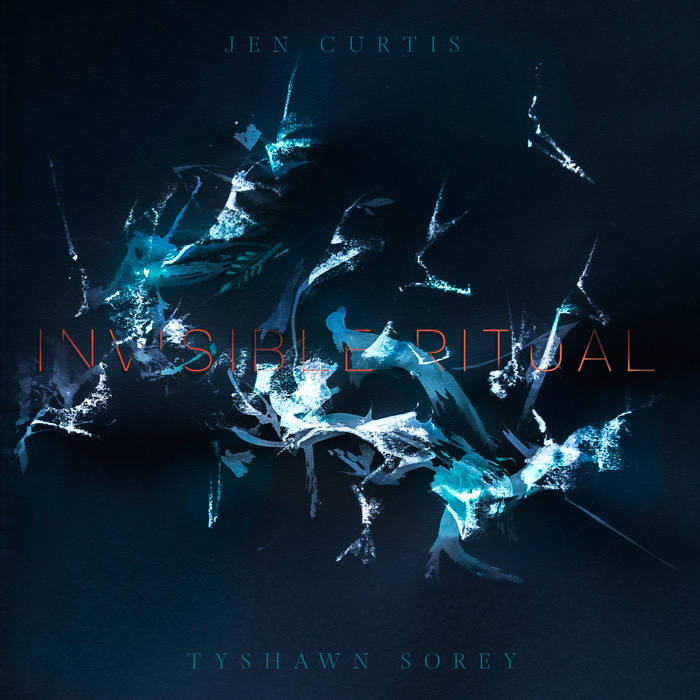 Giles This is such a great session. I love the way freedom and composition is combined: on a lot of the tracks you can hear that there is a certain idea or shape or feel that underlies the playing, but it never confines or restricts or goes to a dead end - both players are able to generate endless variety and interest even within these 'frames'. A must hear!! Favorite track: I..

“Invisible Ritual” captures the synergistic collaboration between violinist/composer Jennifer Curtis and multi-instrumentalist/composer Tyshawn Sorey, and is an outgrowth of work they have done within the context of the wide ranging programming of the International Contemporary Ensemble. The eight tracks heard here are all freely improvised, yet categorizing them as free improvisation suggests a soundworld that they do not inhabit exclusively. Both musicians bring their compositional sensibilities to spontaneously generated structures, intuitively guiding their way through material that consistently demonstrates their virtuosity across diverse stylistic territory.

Jennifer Curtis brings a unique vocabulary to her improvised work, informed by a rich background in fiddling and folkloric traditions including Americana music (bluegrass, blues, old time) as well as Eastern European and South American traditions. Her voracious interest in global musical styles is complemented by her lush, lyrical Romantic violin playing and an approach to the language of contemporary music that highlights gesture and character. Sorey’s prodigious artistry extends from his work on drumset and percussion to his piano playing, and draws on his equally diverse vocabularies, from static, textural work in the mode of Feldman, to percolating, off-kilter rhythmic passages, to cascading harmonies driven forward by deft voice leading.

We can hear the fiddling influence in Curtis’ playing most prominently in tracks I, II, IV, and the latter half of VII, as she turns around vernacular motives as if solving a Rubix cube, adjusting their syntax while looking at them from several angles. Sorey’s accompanimental approach to this material is often to create several layers of rhythmic and textural activity, providing a three dimensional frame for Curtis’ gestural deconstruction. III opens with disembodied piano chords, evolving glacially as Curtis adds subtle commentary. Eventually, accumulated subterranean pressure rises to the fore with furious arpeggios in the violin and rumbling chords in the bass. VI is a tender, deeply felt ballad, with Curtis playing melancholic lines and violinistic figuration over a neo-romantic harmonic palette in the piano. Hints of the blues quickly dissolve into pastels and dark hued voicings.

V hears Sorey and Curtis skittering around chromatic outbursts, brief ponticello and pizzicato asides, before leading into heavily wrought violin double stops and swirling piano passages surrounding a central pitch. This piece is perhaps the most schizophrenic of the collection, journeying to several musical destinations within its nearly eleven minute duration, and closing with a trade off of jagged punctuations. VIII finishes the album with an extended ritualistic coda over tolling gongs. Curtis plays a prayerful incantation of melancholy melodic lines, airy trills, whistling harmonics, and pizzicati with glissandi that evoke East Asian plucked instruments. The piece ends with several declamatory gong strikes, as Sorey mediates the speed of their resonant beatings. “Invisible Ritual” lives at the intersection of improvisation and spontaneous composition (if there is in fact a distinction between the two at all), capturing dynamic, poignant performances by two uncategorizable musicians who consistently defy labels.