James Kallembach: Antigone: The Writings of Sophie Scholl and the White Rose Movement 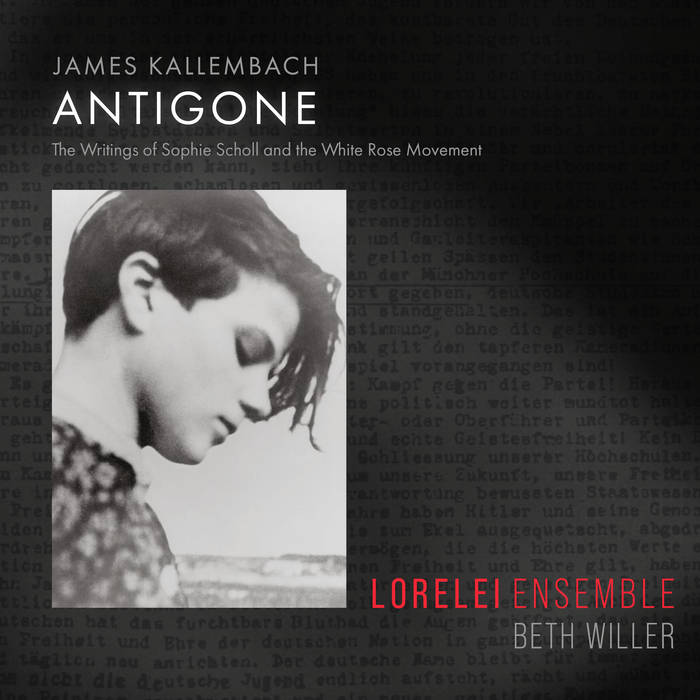 Following their mission to present bold and inventive programs that champion the extraordinary flexibility and virtuosity of the human voice, Lorelei Ensemble and its founder and artistic director Beth Willer present their newest release, the world premiere recording of Antigone by James Kallembach. In this 35 minute composition for female chorus and cello quartet, Kallembach has created a work of dramatic scope that both engages in history but which also challenges the listener to consider their place in contemporary society.

The inspiration for Antigone is the writings of Sophie Scholl and the White Rose. Scholl and her brother Hans were core members of the White Rose, a nonviolent resistance group during WWII that wrote and distributed anti-Nazi pamphlets. Scholl, her brother, and many of the other White Rose members were arrested and sentenced to death in 1943. Scholl’s courage and resolve during her trial was well documented and she is one of the most revered figures in the German anti-Nazi resistance movement.

Kallembach uses Sophocles’s Antigone as a framework for the writings of Sophie Scholl which he draws from her personal letters as well as from White Rose pamphlets. Kallembach writes that as he worked on the libretto, “Scholl’s writing seemed to meld directly into the words of Antigone,” and he used the anti-Nazi White Rose pamphlets as a form of Greek chorus to deliver the Antigone narrative in short, suggestive vignettes. By combining these two sources, one an ancient Greek drama and the other from relatively recent history, Kallembach brings these two works into dialogue with one another and issues a challenge to the contemporary listener. Both Sophie Scholl and the characters in Sophocles’s Antigone are wrestling with the same questions: what does it mean to live justly in an unjust society? How should we act when faced with undeniably unjust decrees by those in power?

In this performance, Lorelei, under the direction of Beth Willer, shows their signature musical flexibility and virtuosity. Kallembach is a skilled and experienced composer for the voice and throughout Antigone, he demonstrates his command of the history of choral writing. The musical points of reference range from a Gregorian chant inspired setting of the second White Rose Pamphlet in the movement “The State is never an end,” to the almost pop inspired power chords of the following movement, “Farewell my friends.” Lorelei and Beth Willer answer the demands of each of these styles and deliver a performance that is both emotionally direct and musically nuanced. By using the unique instrumentation of a cello quartet, Kallembach is able to explore formal ideas of registration and texture. Both the choir of female voices and the cello quartet are capable of great blend and homogeneity of texture, but are separated by register and timbre. The cello quartet functions at times almost as if it were a Greek chorus commenting on the musical action of Antigone.

Antigone manages to both be an exploration of mythology and history as well as a work that is thoroughly grounded in the present. The questions that Sophie Scholl and Antigone wrestled with are still with us. This piece forces us, as listeners, to think about our own role in society and about what it means to live justly.

If you like James Kallembach: Antigone: The Writings of Sophie Scholl and the White Rose Movement, you may also like: