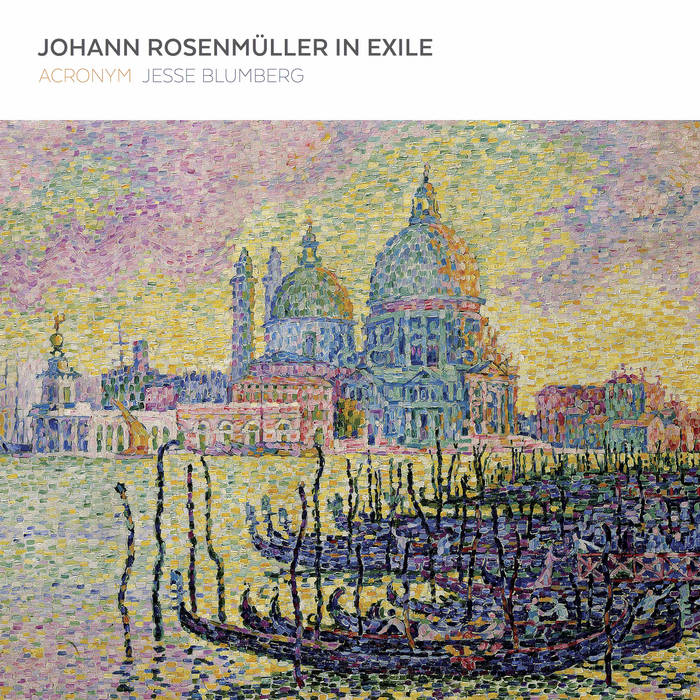 This recording presents music from the time of Rosenmüller's exile in Italy, and alternates large-ensemble chamber sonatas published in Venice in 1670 with the first recordings of unpublished bass cantatas—featuring the outstanding young baritone Jesse Blumberg—which ACRONYM has freshly transcribed from a manuscript collection.

Composer, trombonist, organist, and teacher Johann Rosenmüller was born and died in Germany but spent much of his life exiled in Italy. He began his education at the Lateinschule in Oelsnitz, the city of his birth, and he graduated from the University of Leipzig, where he studied music and theology and was later hired as a teacher. Rosenmüller was promoted at Leipzig’s Thomasschule by 1650, and he was appointed organist of the Nikolaikirche the following year. He published prolifically during this period, printing more compositions than any other composer in Leipzig. The city council assured Rosenmüller that he would be the next Thomaskantor—one of the most prominent posts in Germany, later held by J. S. Bach—but before the position became vacant, Rosenmüller’s career imploded due to his arrest with several schoolboys in 1655 after accusations of sodomy. Following his escape from prison, Rosenmüller eventually made his way to Venice, where in 1658 he found employment as a trombonist at San Marco. By 1660 he had achieved renown as a composer in Italy, teaching students such as Johann Philipp Krieger (whose Sonata a4 was featured on ACRONYM’s Wunderkammer recording). From 1678 to 1682, Rosenmüller held the position of composer at the Ospedale della Pietà, the orphanage and school that would employ Antonio Vivaldi several decades later.

The vast majority of Rosenmüller’s vocal music is sacred and sets German or Latin texts. He likely composed most of the Latin-texted works while in Venice, since they generally reflect Italian and Catholic liturgical practices and musical styles. Nevertheless, they survive largely in German manuscripts, because Rosenmüller sent many of these compositions to contacts in Germany, likely in attempts to secure employment. He modeled many of these works on the secular cantatas of Italian composers such as Carissimi and Cesti, incorporating Italian operatic and instrumental compositional elements. Rosenmüller begins each cantata included on this recording with a brief sonata followed by aria sections alternating with recitative, occasionally interspersed with instrumental ritornelli. These cantatas are found in Berlin in a manuscript collection (D-B Mus.ms. 18883) of thirty-five solo cantatas—most of them unique, unpublished and unrecorded—copied by many hands and compiled in 1700. The four cantata texts consist of Latin devotional prose and poetry. Their provenance is unknown, but they reflect the religious context of Rosenmüller’s Venetian residence and Leipzig education; although they are influenced by Catholic mysticism prevalent in Italy, their emphasis on Christ reveals a fundamental interest in the Lutheran orthodoxy dominant in much of Germany.