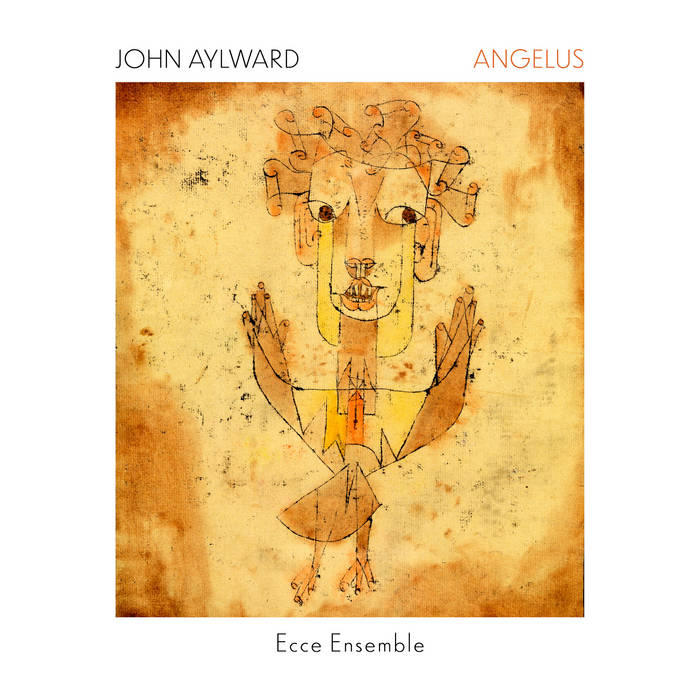 Composer John Aylward writes that his monodrama Angelus is a “treatise on the human experience.” Catalyzed by a trip he took with his mother to Germany for the first time since she fled as a refugee during World War II, the work is variously inspired by Paul Klee’s painting Angelus Novus as well as the authors that provide the texts for the ten movements. Angelus engages with what it means to be human grappling with existential questions.

The opening movement sets Adrienne Rich’s “What is Possible,” a poem that laments the burdens on all of our minds that obscure clarity. Aylward’s setting leads the vocal part back and forth between spoken and sung lines, sometimes seamlessly transitioning from one to the other mid-phrase. The ensemble writing briefly highlights each instrument in turn, as if to paint Rich’s enumeration of quotidian objects that represent bare necessities: “wooden spoon, knife, mirror, cup, lamp, chisel, a comb passing through hair...”

Movement two sets Walter Benjamin’s “Angelus Novus,” a description of Klee’s painting, an angel amidst dystopian ruin. Aylward opens the portrait with poised intensity, with chordal bursts in the vibraphone, skittering ponticello arpeggios in the strings, and focused melodic fragments in the winds. Storms brew, accumulate energy, and recede, as the angel surveys the “wreckage” with dismay.

For his setting of a passage about truth and illusion from Nietzsche’s The Will to Power, Aylward strikes an expository tone, as the music supports the unfurling of a rhetorical argument. Nina Guo’s elegant soprano, mostly bound to spoken words, flies freely on select phrases, highlighting Nietzsche’s dichotomy between illusory and authentic impulses. Aylward’s word painting in this movement is pitch perfect -- one staccato vibraphone note responds to the word “truth,” while he adds pedal to the vibes for an irregular, looped dream sequence on the text, “our eyes glide only over the surface of things…”

Duality between the concrete and abstract realms is also at the heart of Aylward’s setting of Schopenhauer’s excerpt from The World as Will and Representation. Alternating duos with John Popham’s muscular cello lines and Hassan Anderson’s lyrical oboe, Guo reaches an ethereal plateau when singing about deliberative distance. The dissociation of the closing lines (“you are like an actor who has played your part and takes your place in the audience...”) is highlighted by the disjointed, unpitched percussion line.

Aylward elides the percussion and voice duo into the contrasting D.H. Lawrence text, focused on the passion of the flesh. Guo’s energized melodic phrases are punctuated by forceful sprechstimme. The movement becomes increasingly inflamed and culminates in a searing passage that alternates between a high vocal note on the words, “yours only for a short time.”

Movement six sets a passage from Carl Jung’s Aion: Researches into the Phenomenology of the Self. Oboist Anderson’s multiphonics produce crunchy beatings with closely spaced intervals from the voice on the text, “the earth.” Flute dovetails with oboe for a climax on the word, “resolution,” before closing out the movement with a sensual duet.

Plato’s Phaedrus, interspersed with excerpts from the Catholic Angelus prayer, is the source for movement eight, a contemplation on the inspired state of madness. The scoring departs from the duo dominated texture of the previous movements, with percolating passagework in the strings and embellishing figures in the percussion leading into a series of pulsating chords. Guo swims above this shifting texture with lines that explore drastic registral peaks and valleys.

Phaedrus is also the text for movement nine, as the work circles back to the topic of winged flight. Violinist Pala Garcia’s virtuosity is featured, moving fluidly between arpeggios, angular lines, and brusque double stop punctuations. The movement’s taut intensity boils over and erupts into a frenzied ensemble passage, the violent fall of an earthbound angel.

Aylward’s final movement sets excerpts from Weldon Kees’ A Distance from the Sea. A shrouded passage between alto flute and clarinet merges with soprano and ensemble for subdued, resigned material. In its quest for meaning amidst a context of displacement and upheaval, Angelus toggles between themes of the mind, the body, and the spirit. Guided by texts from some of history’s most cherished thinkers, Aylward and the excellent Ecce Ensemble take the listener on a journey that marries his rich, dynamic musical palette with texts that explore core philosophical and metaphysical topics that shape our lived experience. The closing setting of the Kees text seems to shimmer and disappear, reminding us that after the struggle, life can seem “remote, unreal, and perhaps it is.”

Mixed and Mastered by Joel Gordon and John Aylward

Produced with funding from The John Simon Guggenheim Foundation and with support from Catherine and Paul Buttenwieser and Cynthia and John Reed.