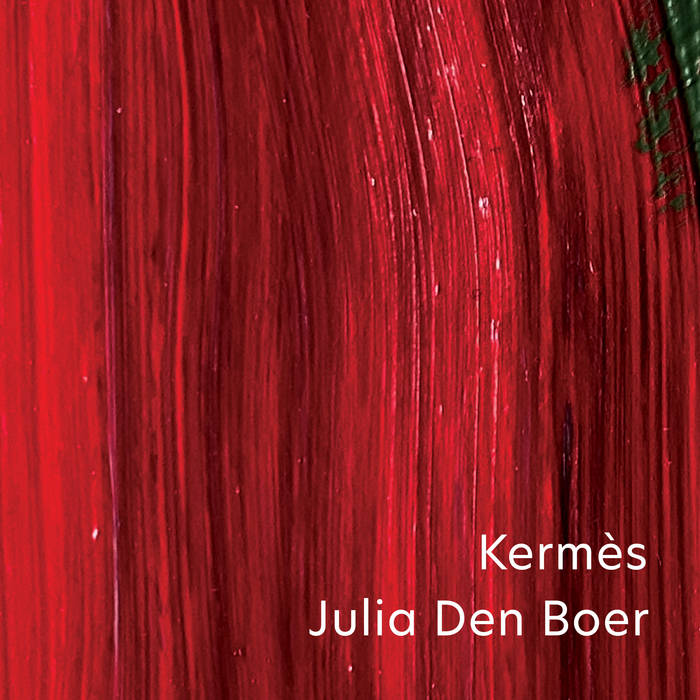 Pianist Julia Den Boer releases Kermès, a collection of four poignant solo works that invite the listener to examine and absorb themselves in the resonance, sustain, and sonority of the instrument. With multi-section works by Giulia Lorusso and Anna Thorvaldsdottir contrasted by longer structural arches of pieces by Linda Catlin Smith and Rebecca Saunders, Den Boer highlights an album that refreshes our listening relationship with perhaps the most comprehensively explored instrument of them all.

The modern piano can function as a symbol of the trajectory of Western art music. So much of the repertoire’s evolution can be seen through the lens of the development of keyboard instruments and their eventual manifestation in the modern, equal tempered piano that was established as standard in the late 19th century. And each new era of aesthetic investigation in music boasts landmark works for keyboard that reflect its sensibilities. It is within this context that intrepid pianist Julia Den Boer presents Kermès, a collection of four substantial works for piano by Rebecca Saunders, Linda Catlin Smith, Giulia Lorusso, and Anna Thorvaldsdottir. These works share an exploratory approach to resonance, sonority, and color that marries a post-Lachenmann focus on the sheer physical material of instruments with a sensitive approach to harmonic subtlety. The result is four varied works of powerfully expressive music that invite us to listen closely, almost “inside” the workings of the piano itself.

Giulia Lorusso’s Déserts is a collection of five pieces, performed here as one track, that are inspired by poetic images associated with the desert. Referencing deserts in Northern and Saharan Africa as well as South America, Lorusso depicts five distinct ecosystems in sound, from rocky landscapes and vast expanses of sand dunes to arid flower valleys and ancient river beds. The severity of the desert is an apt metaphor for Lorusso’s music, a sonic palette that evokes the intensely inward space and vibrancy that one might inhabit and encounter in an extreme environment.

Linda Catlin Smith’s The Underfolding explores the harmonic implications of the piano’s sustained tones as they layer on top of each other. With Feldman-esque delicacy, Smith investigates subtle shadings of voicing and color. Even familiar sonorities shine with new light as the context surrounding them reveals a different hue. Smith embeds implied melodic material within the unfolding chords, stating an explicit unadorned thematic line at one point in the bass.

Structured similarly to the Lorusso work, Anna Thorvaldsdottir’s Reminiscence is written in seven short sections. Thorvaldsdottir often uses instrumental color and space in her music to conjure natural landscapes, specifically those of her native Iceland. A delicate examination of timbre is the focus here as well, as Thorvaldsdottir establishes a multi-dimensional texture of sustained melodic tones, glissandi inside on the piano strings, and rumbling bass figures.

Rebecca Saunders’ Crimson contains the album’s most vigorous material. The work makes extensive use of cluster voicings that are alternatively articulated with sharp accents and as evocative echoes. These brilliant splashes of harmonic color activate the resonant qualities of the piano in fascinating ways, drawing our attention as much to the way the instrument responds as to the initial shadings of the pitches themselves. At a dramatic moment in the work, Den Boer taps on the frame of the instrument, introducing a timbre that reminds us of the physicality of the piano and its practitioner.

Julia Den Boer’s interpretations of these sensitive works are poignant and probing, patiently allowing their narratives to unfold and rising to the appropriate dramatic demands when the work’s have established them. These works point to a compelling new virtuosic anti-virtuosity on the piano — a preference among some composers to excavate the introspective side of the instrument as opposed to its bombastic quality. In this way, there is a kind of implicit neutralization of the piano’s dominance over other instruments, a tacit recognition and reminder that it is trafficking in the same fundamental parameters as the rest: vibration, rhythm, and structure.