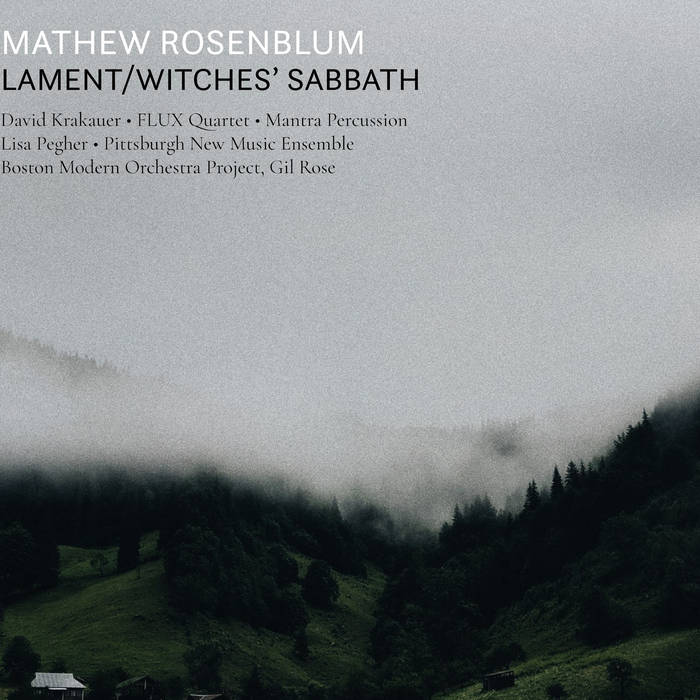 The title track, Lament/Witches’ Sabbath, written for the extraordinary clarinet soloist David Krakauer and the Boston Modern Orchestra Project, Gil Rose, conductor, is Mathew Rosenblum’s most personal piece to date. When he was a child, his grandmother told him the story of how she fled Proskurov, Ukraine in 1919 with six children and pregnant with his mother during the well-documented massacre in that town. Lament/Witches’ Sabbath involves the rewriting of his family history by incorporating Ukrainian and Jewish lament field recordings, his grandmother’s recorded voice, and elements from the last movement of Berlioz’s Symphony Fantastique, "Witches’ Sabbath.” The work is about migration, loss, memory, and cultural transformation and contributes to current debates surrounding these issues. It speaks to diverse audiences both in the U.S. and internationally. Fear and superstition are elements that drive people apart, laments bring people together. The various Ukrainian and Jewish laments presented in the piece are in sympathy with each other.

Northern Flicker, written for the highly versatile percussion soloist Lisa Pegher, is “A pounding showpiece of rhythmic flair” (NY Times) that blends samples of the Yellow-Shafted Northern Flicker together with the driving rhythmic intensity of avant-rock.

Falling, based on the James Dickey poem of the same name and an actual NY Times article about a flight attendant that fell to her death, uses recorded and sung text and is full of references to American popular culture and the embodied ideas of descent, rebirth, transformation, and the acceptance of one’s inevitable situation. Dedicated to the late composer, Dean Drummond, and commissioned by the Barlow Endowment for Music Composition, Falling is brilliantly performed by the Pittsburgh New Music Ensemble, Kevin Noe, conductor, and Lindsay Kesselman, soprano.
Northern Flicker and Lament/Witches’ Sabbath foreshadow the rhythmic intensity and Eastern European melodic tinge of Last Round (Ostatnia Runda). Written for FLUX Quartet and Mantra Percussion and dedicated to the late composer, Lee Hyla, it was described as “impressive,” “visceral” and “tribal ” by The Pittsburgh Post-Gazette. In addition to the amplified strings, bongos, and a variety of small bass drums and small metallic percussion, a set of tuned pipes tuned to a 19 note-to-the-octave tuning is used.

This project is supported by funds from the University of Pittsburgh Kenneth P. Dietrich School of Arts & Sciences.