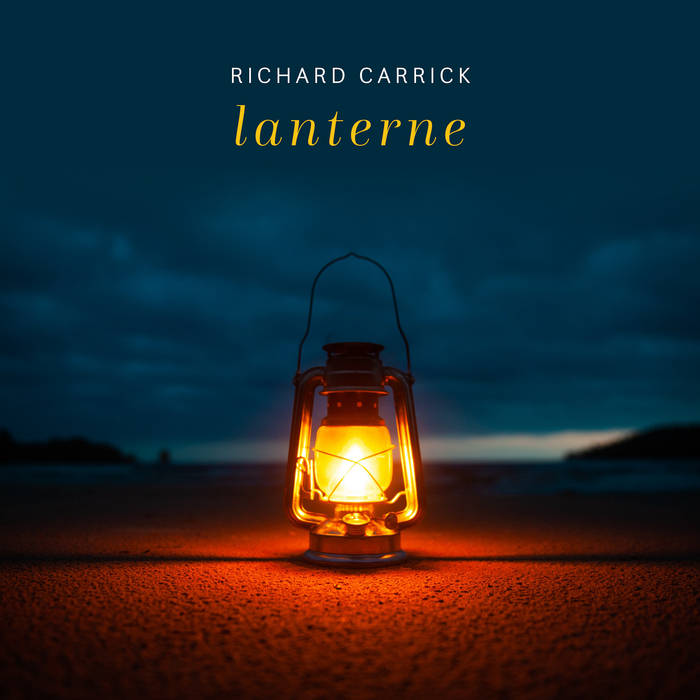 Composer Richard Carrick’s newest release, lanterne, is a compendium of music for compact spaces, a timely curation of recent pieces compiled amidst the extended COVID quarantine. Carrick’s vision for how to write for small forces is an evocative and varied reminder of the way one can create sonic resonance with even the most sparing instrumentation. Among the sources of inspiration for these works are themes of space travel, limited and limitless possibilities, Debussy and Camus, and traditional Korean Gugak music.

The album opens with pianist Marilyn Nonken’s performance of La touche sonore sous l’eau, a sensual solo piece that owes a debt to Debussy’s Jeux without overtly referencing the iconic opera. The texture features watery ascending and descending arpeggios and accented goal tones that activate the piano’s resonance. Like Debussy, Carrick replaces the teleology of harmonic progressions with a multi-angled examination of textural gestures.

Two violin duos follow, both performed by String Noise (Pauline Kim and Conrad Harris, violins). Phosphène is built from a taut gesture wherein an ascending glissando played with heavy vibrato is stretched like a tight rubber band as it approaches the top of the slide. The second of the duos, Natural Duo, inverts the ascending gesture, interspersing a descending slide figure with brusque, accented notes. In both duos, repetition fulfills the function of increased emphasis and allows for additive textures that extend the rhythm and introduce embellishing material.

The one minute long une for flute and piano (performed by flutist Margaret Lancaster and Carrick on piano) unfolds as one single melody, intertwined between the two instruments. Inflected by microtones, metric displacement, and disjointed intervallic interjections, the brief piece presents itself as a quasi-primitivist dance and serves as a perfect introduction to the title work for solo bass flute, also performed by Lancaster. A focus on rhythmic structures similar to Gugak music can be heard here, developed through a repetition with variation approach to material. Techniques involving vocalizations and harmonics which articulate the overtone series lend lanterne an earthy focus, balanced by its propulsive presentation.

Sarang Ga for bass clarinet and piano (performed by Vasko Dukovski and Carrick) represents a more explicit mining of Korean influence, specifically the Pansori vocal tradition. It also contains music written in graphic notation, an area of exploration that has become an important component of Carrick’s recent work, including his extended Graphic Series. The trajectory of the piece starts in the highest reaches, moving through a patient exploration of ornamental and embellishment gestures, through a low register reimagining of a Pansori melody that is alternatively brash and reflective, and closes with ecstatic, extended technique clarinet playing over a cacophonous din played inside the piano.

La Scéne Miniature for flute, piano, bass clarinet, and cello (heard in a concert recording at the Library of Congress by Carrick’s ensemble Either/Or) takes a murder scene from Albert Camus’ The Stranger as a point of inspiration. As in many other works on this album, Carrick prioritizes capturing the essence of expressive gesture over development in this evocative piece. We hear several different permutations of the four instruments in primary and secondary roles over the seven minute piece, culminating in a setting of an Algerian melody culled from Bartok’s early 20th century ethnomusicological fieldwork.

The next three works on the program are drawn explicitly from Carrick’s work with Korean traditional music. Danga features cellist John Popham with Carrick on piano; the title is a Pansori term for a short introductory piece — characteristic vocal inflections are transcribed for cello over tolling, bell-like piano chords. The solo violin work Seongeum, performed here by Lauren Cauley, is an extended manifestation of the same transcription principle of Pansori vocal gestures. Slides, overpressure, sul ponticello, grace notes, and several other ornamental techniques are used to powerful effect to capture the richness of this tradition of Korean singing.

sandstone(s), commissioned by the Pacific Rim Festival, is the only work on this recording that incorporates actual Korean instruments alongside Western instruments. Unlike many works for similar hybrid instrumentations that take a quasi-antiphonal approach, Carrick integrates the gestural and timbral language of the Western and Eastern instruments. The urgent, searing timbral quality of the Korean instruments is given enveloping harmonic support by the cello as the flute and violin engage in dialogue with the melodic material.

The final work on the album is the four movement string quartet, Space:Time, performed here by longtime Carrick collaborators, the Mivos Quartet, and funded by an award from the Fromm Foundation. Physical barriers to space travel are the thematic jumping off point for the work. Each movement experiments with musical parameters in slightly different ways. The first, “Claustrophobia,” zeroes in on central pitches as a taut texture swirls around them, employing harmonic glissandi and closely spaced intervals to simulate the pressures brought to bear on enclosed spaces. The second, “Gravity,” is a contrapuntal exercise; two pitches are volleyed across the ensemble in various registers as if to play with the physicality of weightlessness outside of the earth’s atmosphere. The third, “Space Travel,” is organized into a palindrome, as gradually accelerating wavelike gestures build towards a densely active center, before receding back to the relative calm of the opening. In a final coda that pays homage to composer Horatio Rădulescu, slow moving cantus firmus lines are embellished by intensifying swells.

Mixed by John Escobar in RedRoom

Track 7: February 18, 2017, Live at the Library of Congress, Coolidge Auditorium