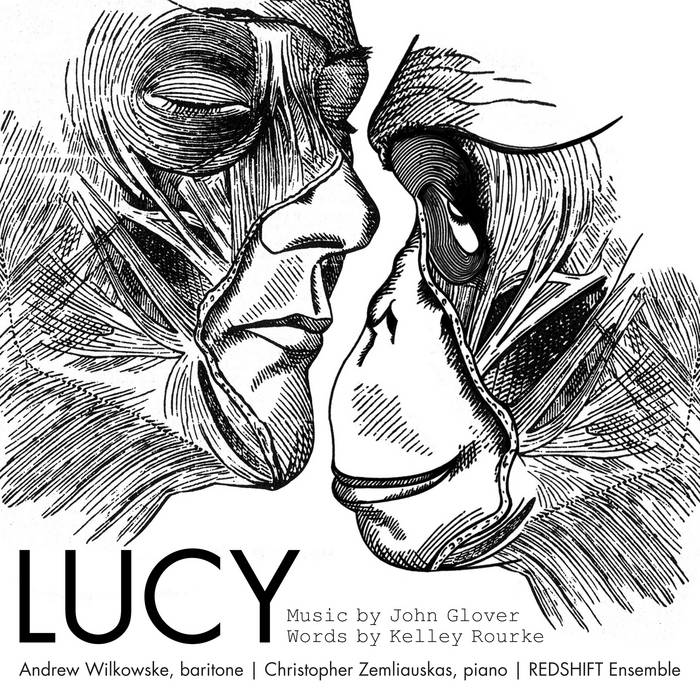 Composer John Glover and librettist Kelley Rourke's opera Lucy takes as its subject the fascinating and thought provoking story of a chimpanzee raised by a human family in Oklahoma in the 1960’s as part of research into both human and primate behavior and psychology. Glover’s poignant and emotionally sensitive piece explores not just the ups and downs of Lucy’s childhood and relationship to her “parents” Maurice and Jane Temerlin, but also forces us to engage with questions of nature vs. nurture, what it means to be human, and the consequences of our interactions with other species.
He and librettist Kelley Rourke were initially inspired by hearing Lucy’s story on the popular public radio program, Radiolab. The songs relate actual episodes from Lucy's life, as reported in Maurice Temerlin's memoir and other sources. Glover’s effervescent style is perfect for the recounting of Lucy’s everyday activities as they are transformed into profound observations on behavior, as well as capturing Maurice’s dual role as father and documentarian of this unique experiment. The prevalence of familiar scenarios between children and parents as they are growing up is striking — in a particular powerful passage, Maurice relates his impulse to punish Lucy by striking her. Lucy, who had learned ASL (American Sign Language) by this time in her development, uses it to communicate with Maurice and eludes her punishment just as a human child might, with a cute appeal to her angry father. Lucy’s Vocabulary, age 9.5 deftly “sets” Lucy’s words, with Wilkowske signing as the violin plays fragile harmonics over a sparse and innocent toy piano and cello accompaniment. By choosing a small ensemble configuration, Glover keeps our focus on the incremental, domestic discoveries of child rearing and avoids distracting bombast.
Andrew Wilkowske delivers a heartfelt performance, capturing the nuance of Maurice’s relationship to his daughter, and REDSHIFT Ensemble provides colorful, expressive support. The release concludes with an interview, edited by WQXR/ Q2’s Hannis Brown, with Robert Ingersol, a primatologist who knew Lucy and was featured in the documentary, Project Nim, a landmark film about efforts to teach a chimp sign language. Lucy is a story that may leave us with more questions than answers, about the distinctions between humans and animals, our assumptions about child rearing, and our emotional attachments, but Glover and Rourke’s sensitive presentation is firm in its assertion that the questions that are raised have profound implications for our understanding of ourselves.