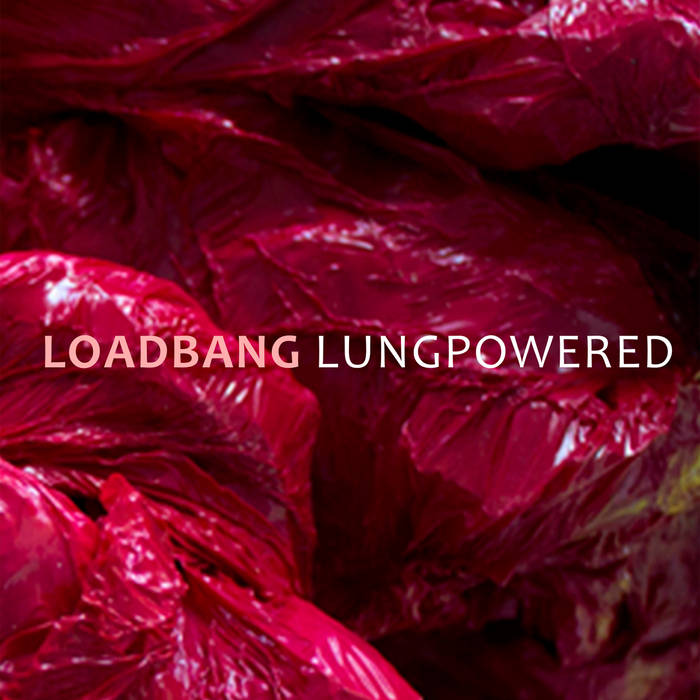 “In an artistic world that prizes the sleek, loadbang glows with assymetry. Instruments of brass, wood, and flesh. Acoustic music named for a mechanistic impulse command in electronic music software.”
- Ian Power, from the booklet notes
New York based ensemble loadbang has been expanding the repertoire for its unique instrumentation of bass clarinet, trombone, trumpet, and baritone voice since its formation in 2008. Their new release features works that engage with the broad range of musical applications of breath, wind, and air, from their conventional use with wind instruments, to whispers, mouth sounds, and extended techniques. Composers Alexandre Lunsqui, Scott Worthington, Alex Mincek, David Brynjar Franzson, Reiko Füting, and William Lang treat the ensemble as a living, breathing organism; as one instrument’s sound emerges in a crescendo with the wah of a cup mute, another punctuates the entrance with a pop or click. Brazilian composer Alexandre Lunsqui’s three companion pieces “Guttural 1-3” starts with rhythmically virtuosic passages where the instruments mimic deft syllabic writing for the voice. The four compressed movements of Scott Worthington’s “Infinitive” are at times reminiscent of Stravinsky’s haunting late work, “Requiem Canticles”. Delving deeply into closely spaced, microtonal textural chords, Worthington creates a profoundly intimate atmosphere with very limited materials. Alex Mincek, one of the directors of new music collective Wet Ink Ensemble, returns the program to the more playful side of loadbang’s expressive palate, as muted brass comment on breathless phrasing in the voice, over an accompaniment that suggests an off- kilter jazz bass line. Reiko Fueting is interested in exploring the layers of memory and the transformational power of repetition in his work. In “Land of Silence”, we hear material considered from every angle, as small details accumulate and expand Füting’s triggered machines of sound. Füting’s process echoes the way our mind pores over memories from several angles, adding and subtracting information along the way. William Lang, the trombonist for the group, contributes the final work, an Alvin Lucier inspired meditation on sound, frequency, and beatings, played by loadbang on four harmonicas. The harmonica is an instrument whose simplicity is a perfect manifestation of loadbang’s work -- inhalation, exhalation, and all sounds in between are integrated into the fabric of the compositions for this unique group. Beyond its idiosyncratic instrumentation, loadbang has assembled a repertoire that mines the expressive possibility of sounds that we instinctively understand as intimate and hyper-personal. By marrying timbres generated by our mouths, lips, and lungs with the current aesthetic concerns of six cutting edge composers, loadbang has achieved what every new music ensemble strives for - viscerally impactful music that makes no concessions or compromises.
credits

loadbang has premiered more than 200 works, including many written by members of the ensemble. Other composers who have written originals and new arrangements for loadbang include Pulitzer Prize winners Charles Wuorinen and David Lang, Guggenheim Fellowship winner Alex Mincek, Eve Beglarian, Nick Didkovsky, Reiko Füting, and Andy Akiho and Alexandre Lunsqui, who were both recently commissioned by the New York Philharmonic. Not content to dwell solely in the realm of notated music, loadbang is known for its searing and unpredictable improvisations, exploring the edges of instrumental and vocal timbre and technique, and blurring the line between composed and extemporaneous music. To this end, they have embarked on a project to record improvisations and works written by members of the ensemble. These recordings are designed, fabricated, and released in hand-made limited editions. They can also be heard on a 2012 release of the music by John Cage on Avant Media Records, a 2013 release of the music of loadbang member Andy Kozar on ANALOG Arts Records which was called ‘virtuosic’ by The New Yorker, and a 2014 release on ANALOG Arts Records titled Monodramas.

loadbang is dedicated to education and cultivation of an enthusiasm for new music. They have worked with students ranging from elementary schoolers in the New York Philharmonic's Very Young Composers program and the Baltimore Symphony Orchestra’s OrchKids Program to college aged student composers at institutions including Princeton University, Cornell University, New York University, Yale University, Peabody Conservatory, and the Manhattan School of Music. They are in residence at the Greenwich House Music School in New York City and the Charlotte New Music Festival."