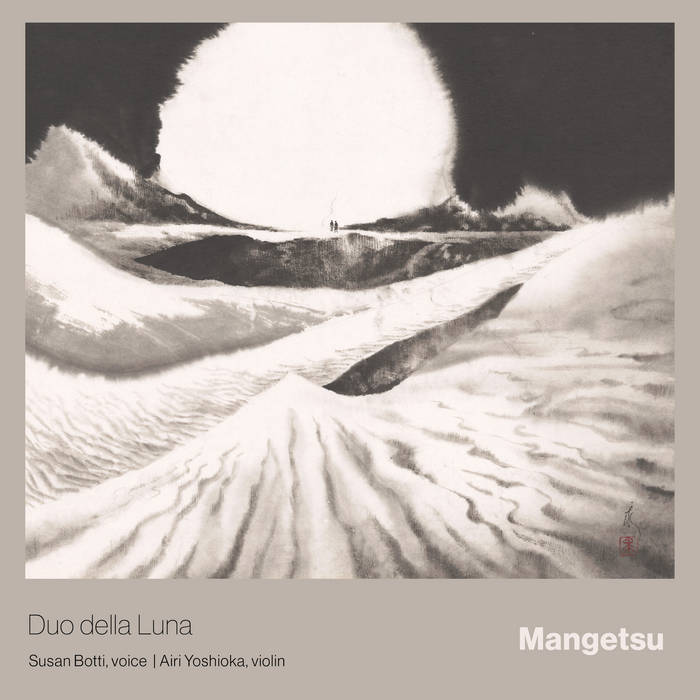 The voice and violin duo Duo della Luna (Susan Botti and Airi Yoshioka, respectively) brings a remarkable versatility and integrated ensemble approach to a rarefied instrumental combination. Both musicians take advantage of their impressive range to broaden the scope of expressive possibilities within this duo formation. On Mangetsu, that range is in full bloom, from Botti’s fluid text delivery in different languages and vocal styles to both performers’ virtuosic navigation of extended techniques and gymnastic passagework. Throughout, the duo is engaged in a intertwined dialogue between the two players, always balanced elegantly, with each fulfilling an equal and essential role in the musical texture. Their sensitive performances are captured in a sensual recording by Grammy award winning engineer and recording industry luminary Todd Whitelock.

Susan Botti’s Mangetsu sets three texts that explore the mystery of the moon by Izumi Shikibu, William Butler Yeats, and Antoine de St.-Exupéry. Connecting these movements are mellifluous, wordless songs (“mangetsu”). The first opens in a delicate halo of sound, as if from afar, and the violin gently follows the contour of the searching vocal line as if performing a ritual dance. A Bartók pizzicato, quick tremolando, and sighing gesture in the violin signals the opening of “From Darkness,” a nocturnal setting sprinkled throughout with lithe vocal melismas. The short third movement is wordless again, replacing the imitative texture of the opening movement with a two voiced texture that suggests harmonic motion. “The Stolen Child” begins with the work’s most vigorous music, opening with a virtuosic violin passage of arpeggios and double stops. A playful section grounded by repeated pizzicati in the violin follows, as the text evolves from a youthful moonlight excursion to unsettling mystery. “You told me” begins rhapsodically, again with violin alone, before the soprano line joins with plaintive, lyrical lines, and the ominous repeated notes from the previous movement return to end the song. The final “mangetsu” is expansive, as Yoshioka’s double stops frame Botti’s poignant phrasing, imbued with powerful expressive meaning despite the absence of text.

For her arrangement of selections from Béla Bartók’s famous set of 44 Duos for Two Violins, Botti alternates between referencing the folk texts from the songs from which Bartók borrowed material and wordless texts, drawing a powerful connection to the rich traditional source. For “Serbian Dance” and “Arabian Dance,” Botti adopts a multi-syllabic sonic palette, character variations, and subtle ornaments to further enliven the original instrumental lines.

Kaija Saariaho’s Changing Light revels in contrasts in dialogue with one another. The text “light and darkness” and “night and day” is sung on one static pitch while the violin plays arpeggiated figures that float through registers. When the text switches to “we marvel at the mystery of the stars,” the vocal part leaps into the high register outlining several intervals while the violin remains stable on a trill. This balancing out of complementary energies unfolds throughout the piece. The line, “as you renew time,” finishes off the work, sung several times, first solo, and then with a series of shimmering double stop trills in the violin.

Botti’s arrangement of “Wayfaring Stranger” takes on the hue of the blues, albeit through a cloudy prism. The violin part hints at characteristic blues fragments, circling around the more straightforward vocal line with improvisatory freedom, occasionally landing on surprising momentary pitch confluences. The final line, “I am just going over home,” is nonetheless unresolved, destabilized by a seesawing figure in the violin that subverts harmonic closure.

Linda Dusman’s Triptych of Gossips sets poetry by Serena Hilsinger of the same name that engages with groups of threes through a proto-feminist lens. “Incantation” opens with airy violin harmonics before the soprano enters with a series of vocal effects over a brittle arpeggio. The texture is fragmentary, cutting between surprising sounds on a dime and building a sonic vocabulary. Hinsliger’s text enters with a flowing line in the violin, also organized primarily in a triple meter. In “Invocation,” Botti’s delivery turns to colorful sprechstimme, as unpredictable punctuations of scratch tones and over-pressure figures in the violin keep the material off-balance. The final phrases are heard in rhythmic unison, the violin and voice tracking each other in maudlin lockstep. The last section, “Convocation,” is the work’s most conventional setting, with flowing, impetuous violin passages. At the work’s climax, the soprano’s forceful lines lead up to a high arrival over searing open string fifths in the violin.

The album closes with two Italian songs from Northern Italy arranged by Botti. In both, the connection to the original tradition is elegantly preserved with stylistic ornamentation in the vocal performance while the violin part embellishes the melody and creates a multi-dimensional conversation between source material and a contemporary concert context. The final song is playfully joyful, capturing the lightheartedness of simple love. The two songs are a fitting close for an album that prizes balancing diverse text sources, aesthetic orientations, and creative ways of approaching the duo instrumentation, all performed with symbiotic grace by Duo della Luna.