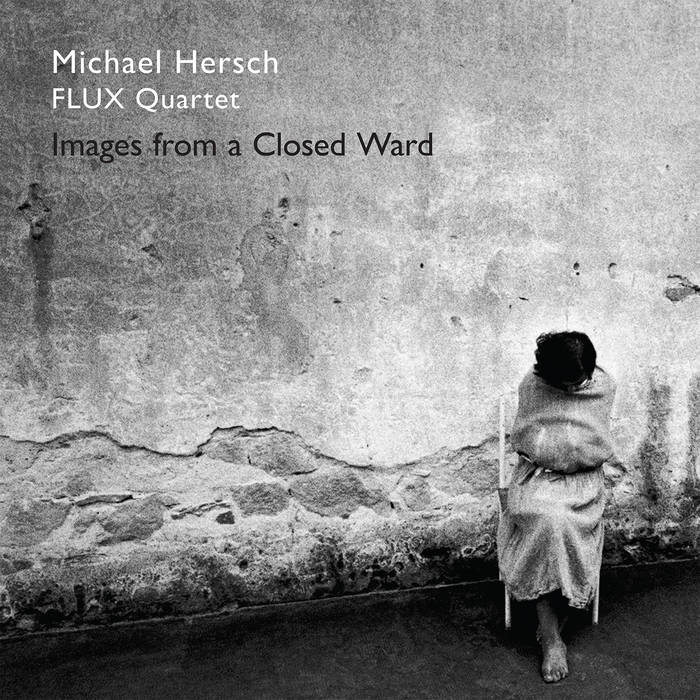 The genesis of composer Michael Hersch’s powerful Images from a Closed Ward, performed here in its revised version with virtuosity by the FLUX Quartet, traces back to his time in Italy in 2000, while he was a Fellow at the American Academy in Rome. During his residency, Hersch encountered an exhibit of etchings inspired by a new translation of Dante’s Inferno by American artist Michael Mazur. The two recognized in each other a shared sensibility and cultivated a collaborative working relationship and admiration. The piece we hear on this recording was inspired by Mazur’s series of etchings and lithographs of inmates in a Rhode Island mental institution in the early 1960s. Sadly, by the time Hersch contacted Mazur after some time without being in touch to share sketches of the work, Mazur had unexpectedly passed away. Hersch’s ability to capture the torment underlying the physical images of the subjects in the etchings is uncanny. Whether the music is harsh and violent, or wrenchingly introverted, it retains a quality of utter psychological and spiritual isolation that would seem to be characteristic of severe mental illness. The thirteen movement piece opens tentatively, with the four string instruments hesitatingly coming together and breaking apart in small waves of sound mass, chromaticism, and microtonal inflections of diatonic harmony. Movement two is one and half minutes of brutal chords, uncomfortably raw. These two opposing aesthetic impulses — disembodied and searching contrasting with bracing and desperate — frame the expressive language of this emotional piece. In movement six, they coexist as the ensemble splits, with one duo playing strong block chords revealing quiet harmonies in the other two instruments behind. Movement seven is a chorale, solemnly delving into the depths in a series of delicately voiced chords with closely spaced intervals, tremolos, and timbral fragility. Movement eight breaks from the largely sustained character of the work thus far for a sparse interlude of violent pizzicato gestures. Movement eleven contains the most overtly virtuosic writing for the ensemble in the piece. The energetic verticalities from movement two are heard here in a more developed rhythmic context with relentless intensity and bracing scale passages. Hersch diffuses the energy of this ten minute onslaught with two final movements which look inward again with resignation and quiet internal conflict. Images from a Closed Ward is available in a shorter version on a previously released recording, but this version is current and sanctioned by the composer as final. Michael Mazur’s powerful images, alongside often shocking photographs by Gianni Berengo Gardin, Jerry Cooke and others, are included in the accompanying CD booklet, lending context to the presentation of Hersch’s music. Images from a Closed Ward is undoubtedly serious listening, sustaining a somber density of expression for the duration of its sixty-five minutes of music. Perhaps its most hopeful quality is Hersch’s capacity to plumb the depths of human alienation to generate resonance far beyond the walls of a psychiatric institution and into our own individual psyches in times of difficulty. In this way, the music connects us with patients who experienced grave circumstances, and bonds us in shared humanity.