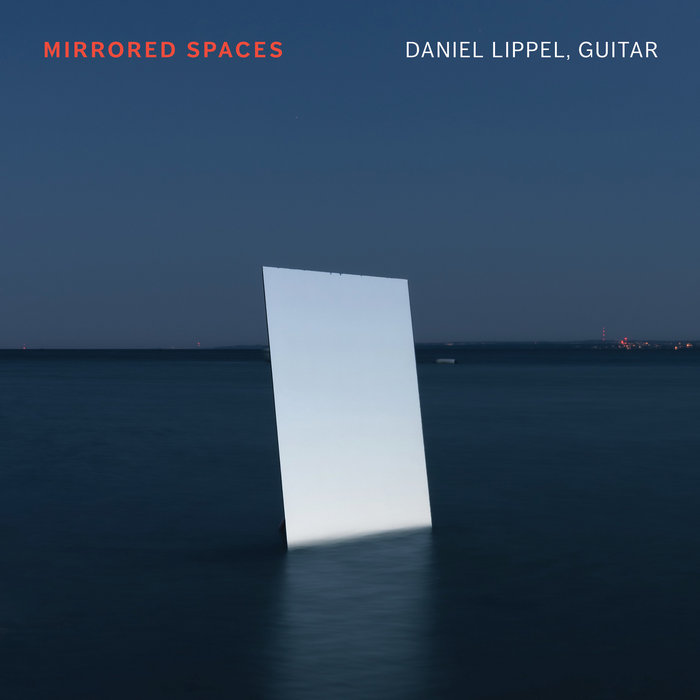 Guitarist Daniel Lippel’s “Mirrored Spaces” is a double album of premiere recordings of works by his composer colleagues that eschews stylistic agendas in favor of a balanced program in which contrasting aesthetics are in dialogue with each other. Tracing back to a 2008 performance entitled “Experiments in Co-Composition” at The Tank, a NYC venue that hosted many new music events in the early 2000s, the album includes three works from that concert alongside several others composed more recently, many in the same spirit of collaboration. “Mirrored Spaces” frames the entire project, as an album and piece title, but also as a jumping off point for relationships between pieces. Featuring music by American composers Orianna Webb, John Link, Kyle Bartlett, Douglas Boyce, Ryan Streber, Ethan Wickman, Christopher Bailey, and Lippel himself, as well as overseas composers Dalia R. With (Lithuania), Sergio Kafejian (Brazil), Karin Wetzel (Switzerland), and Sidney Corbett (Germany), the release is geographically and sonically diverse.

The album is loosely organized around a metaphorical exploration of mirrors within a musical context and how that relates to the properties of the classical and electric guitar, electro-acoustic music, structure and material, programmatic and historical relationships, alternate tunings, and microtonality. Kyle Bartlett’s Kurtag-esque Aphorisms, placed throughout the recording like a series of recurring monologues, and Dalia Raudonikyté With’s Primo cum lumine solis both wordlessly translate literary sources into poignant sonic miniatures. Ethan Wickman’s Joie Divisions and Douglas Boyce’s Partita engage with historical tradition as a filter through which we hear contemporary material. The movement of Mirrored Spaces were written in a responsorial fashion by composer Orianna Webb and Daniel Lippel -- the process manifesting itself both in terms of their creative reactions to the material supplied by the other, but also a recontextualization of equal-tempered material written in standard tuning within a quarter-tone alternate tuning.

Four electro-acoustic works each demonstrate a different relationship between the electronics and the acoustic instrument. Karin Wetzel’s Amorphose 2 for guitar and live electronics, performed here by Phillip White, unfolds largely as a meditation around central pitches created by an unorthodox scordatura as sixteen live electronics cues generate various delays and processes of the guitar, at times shadowing the performer, and at others asserting a life of their own. John Link’s Like Minds can be seen as an extension of Mario Davidovsky’s work in electro-acoustic music; Davidovsky established symbiotic but independent relationships between electronics and instrumentalist; Link toys with obscuring the boundaries altogether. São Paulo based Sergio Kafejian’s From Scratch engages with similar aesthetic issues, but the sonic language of both parts are drawn from a rarefied vocabulary of extended techniques on the guitar including scratches, percussive sounds, and slides, and the extensive use of a plastic ruler grinding along the strings. Christopher Bailey’s Arc of Infinity places the guitar inside a sonic house of mirrors comprised of three "virtual instruments": bell-like sounds, a “dirty sampler” composed out of guitar notes from recent recorded repertoire, and flanged/delayed/filtered sounds.

The three works for electric guitar on “Mirrored Spaces” share the common link of exploring alternate tunings, while the Corbett and Streber both filter classical guitar technique through the unique characteristics of its amplified cousin. In Ryan Streber’s Descent, the guitar is tuned similarly to a cello (C-G-D-A-B-E), and played through two amplifiers in a journey from a high to low tessitura, and from a clean to a distorted sound. Sidney Corbett’s Detroit Rain Song Graffiti is a tone painting capturing an uneasy calm in one of America’s most fraught cities, and calls for a low E-flat, opening up resonant voicings to a set of uncommon sonorities. Lippel’s Scaffold was written as a transitional structured improvisation; electric guitars on stands are in tunings used in Mirrored Spaces and Descent, and a third guitar is in a quasi-stepwise tuning while an ebow sustains pitches that are adjusted with the tuning pegs. Loop pedals and a pre-recorded file entering at the end create a wash as the piece moves from one tonal center to another. The live recording of Scaffold from The Tank 2008 performance is included here as an audio time capsule, placing the album in the context of the performance that planted the initial seed for the project.