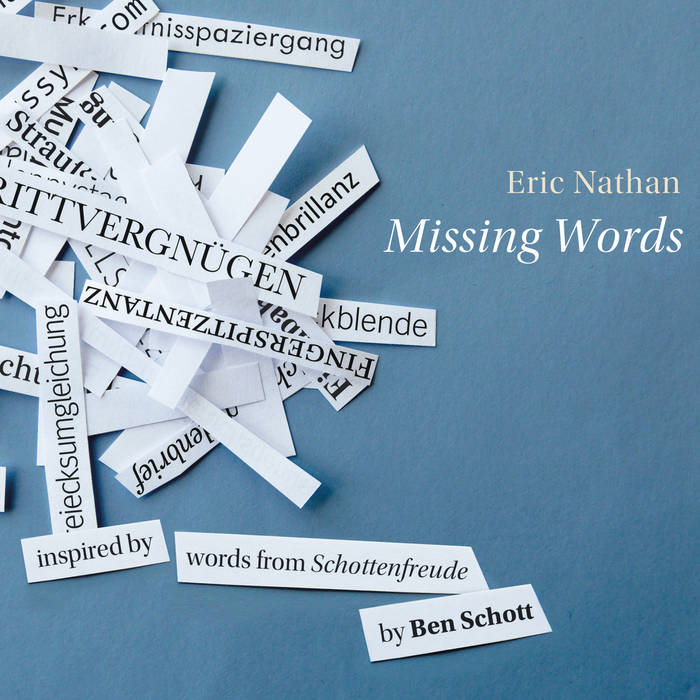 Performed by the Boston Modern Orchestra Project, American Brass Quintet, cellist Parry Karp and pianist Christopher Karp, International Contemporary Ensemble, Neave Trio, and Hub New Music, Missing Words is a six-part series inspired by German words invented by writer Ben Schott in his book Schottenfreude (2013) that describe ineffable experiences of contemporary life. The musical works speak to intimate yet shared experiences that range from the tragic and beautiful to the comic and commonplace. With Missing Words, Nathan finds meaning in the phenomena that add color to everyday life. Schott has contributed a foreword for the album and Robert Kirzinger wrote the liner notes.

Musically, Missing Words is a stark departure from Nathan’s other works. In order to convey the subtlety and complexity of Schott’s precisely constructed portmanteau words, Nathan has invented new sonorities and forms that are surprising and delightful. He expresses, with exactitude and humor, shared human experiences that bring us closer together. These Schumann-esque character pieces take the listener through sound worlds that are widely disparate.

In his liner notes, Robert Kirzinger writes, “Already possessing a strong compositional technique and a large toolkit of resources, Nathan frequently found himself developing new tools and sounds to translate into music the commonplace or surprisingly subtle ideas behind Schott’s linguistic constructions… At times we’re asked merely to notice something – the way some physical action feels, the way it affects our mood. Other pieces are one-liners, a nudge to the ribs, while others, perhaps unexpectedly given the tiny kernel of their origins, expand and reflect upon much bigger phenomena of human experience. Each of the pieces is complete in itself; at the same time, though, each is a porous little world of sound that grows beyond itself, blends with the memory of the others, and sings to us a song of humanity.”

The first Missing Words piece was born during Nathan’s time in Italy as recipient of the Rome Prize of the American Academy of Rome. Composed for the resident Scharoun Ensemble, made up of members of the Berlin Philharmonic, Missing Words I launched the quasi-Germanic musical concept. So far, the series consists of six pieces for various ensembles, each inspired by Schott’s proposed new words that are missing from the English language, in the vein of Schadenfreude, Doppelgänger, and Wanderlust.

Kirzinger adds, “Nathan’s music captures the range of human experience, and embodies an understanding that life’s richness results from the accumulation of all of its facets, from the mundane to the profound. The composition of Missing Words I set in motion a process, familiar to the composer, of seeking out the most direct musical language to express the emotional and narrative content of a succinct idea.”

Ben Schott writes in the foreword, “Eric’s selected translation – I can think of no better word – is not just unexpected in conception, but remarkable in execution. It does with notes what I attempted with letters – that is, it takes a superficially frivolous idea, and treats it with a seriousness that reveals. Missing Words is elegant and amusing, personal and public... Schottenfreude exists because when English is exhausted, we turn to German. Missing Words exists because when words are exhausted, we turn to music.”


Tracks 4-6 recorded on October 26, 2021, in Norman S . Benzaquen Hall at The DiMenna Center for Classical Music in New York

The movement titles of Missing Words, and their translations and definitions, quote text from Schottenfreude by Ben Schott. Copyright © 2013 by Ben Schott. Used by permission of the author. All rights reserved.

The Neave Trio are exclusive artists of Chandos Records and appear with their kind permission.

This recording was made possible, in part, by the Brown Arts Institute and Brown University.