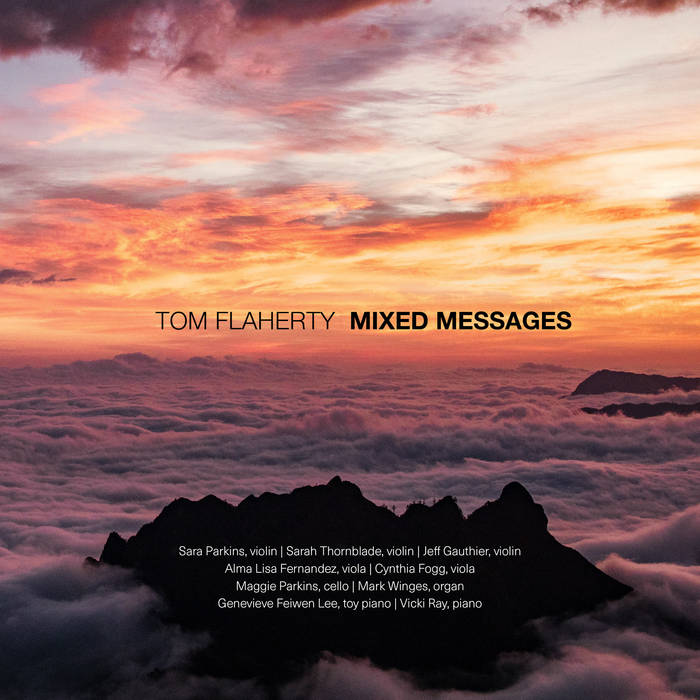 Flaherty features several of his electro-acoustic works in this collection, highlighting his interest in phenomena, both musical and extra-musical. In each of these pieces, Flaherty posits a kind of puzzle and then uses the canvas of the piece to work through it, whether it relates to a programmatic idea, the relationship between instrument and electronics, or a component of the musical material itself. Within that frame, his expressive palette is broad and affecting and his development of material deft. This dynamic between conceptual frame and evolving detail gives Flaherty’s music substance and invites listening on multiple levels.

Shepard’s Pi for toy piano refers to the Shepard scale, a phenomenon of acoustics where simultaneous octaves are arranged in such a way as the sequence of pitches seem to rise endlessly without ever reaching the next octave. Flaherty chose to explore a similar paradigm on the toy piano because of the ambiguity that results from the sounding rods — in some registers the overtones of a given note can obscure the fundamental to such a degree that it is not clear what the principal pitch is. Flaherty toys with this concept and its manifestation on the toy piano, writing scale passages that mysteriously seem to remain in one register even as they ascend and rhythmic material that can be interpreted from different metric angles. Reinforcing the word play, Flaherty also embeds references to pi, 3.14159, in the number of sections, tempi, and electronic sounds that are integrated briefly.

Threnody for cello and electronics is an austere meditation on the nature of war. The computer records and processes long sustained lines in the cello, distorting them in a miasma of overtones and unsettling timbres. Improvisatory pizzicato and staccato phrases trigger a percolating response from the live processing in an energetic contrasting section. The relationship between performer and electronics here is symbiotic but not imitative — the processing transforms the played material sufficiently, establishing a cause and effect paradigm that nonetheless allows the sounds to occupy an independent space from one another.

Under the Weather for viola, organ, and electronics integrates water sounds, more or less musique concrète, into the fabric of an impressionist work exploring the various modes of motion that water takes. The metaphor extends to the instrumental parts as well, with the organ playing liquid arpeggiations in support of floating viola lines.

Recess, written for the Eclipse String Quartet, captures the motions of childhood play in three movements, “Spin,” “Swing,” and “Tag.” The quartet’s sound is processed through live electronics via a MAX patch, a component of the piece that is optional in live performance. In “Spin,” musical fragments swirl through the ensemble, picked up by the electronics to reinforce centrifugal energy. “Swing” slowly accumulates energy, as the repetition brings us higher and higher into a weightless space. “Tag” captures the kinetic energy of chasing games, and the pure joy of play.

Violelation for viola and live electronics unfolds as a dialogue between the live performer and a MAX patch which divides the initial instrumental pitches into granules that animate the sonic environment for the rest of the piece. The texture that evolves is evocative, intentionally so, of components of Balkan music, with its modal emphasis and irregular, propulsive rhythms.

Mixed Messages for violin, piano, and electronics primarily turns one harmonic sonority around, placing it in different registers, inversions, and textural contexts, as a way of representing the ambiguity inherent in perception. The expressive language ranges from subdued and lyrical to furious and virtuosic. A sardonic, polyrhythmic passage breaks up the largely sustained texture, and leads into a climactic final section.

Release for violin, cello, and electronics strategically builds several points of tension — harmonic, rhythmic, timbral — only to release them as a quasi cathartic exercise. The piece closes with pointillistic pizzicati with sporadic sustained phrases in each instrument, an ethereal exhalation after the density of the earlier material.