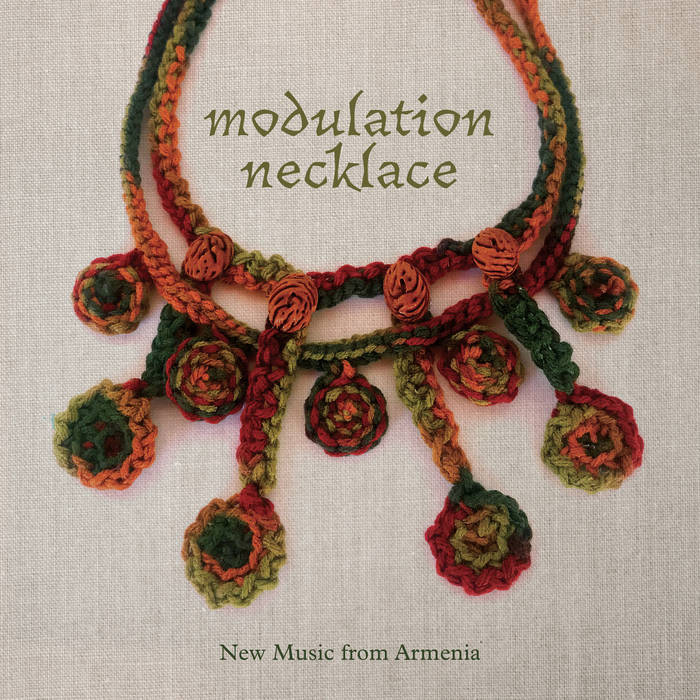 Violinist Movses Pogossian has assembled this illuminating collection of contemporary music from Armenia, “Modulation Necklace," revealing a vibrant repertoire whose aesthetics are as outward looking as they are grounded in their reverence of a centuries old culture. In his liner notes, Pogossian acknowledges the long shadow that the Soviet Union cast on Armenian composers during its reign — this recording celebrates this generation’s liberation from those constraints. The composer Tigran Mansurian played a pivotal role in connecting the threads of this Armenian new music tradition, both by literally introducing Pogossian to musicians involved in the project, but also in his courage and leadership to explore Western and later older Armenian sources for inspiration during the Soviet era. The performers heard here are drawn from Pogossian’s Dilijan Chamber Music Series, the Lark Musical Society, as well as the flagship group of UCLA’s Armenian Music Program, the VEM Ensemble.

Artur Avanesov’s Quasi harena maris for piano quintet opens the recording with music inspired by a weighty passage from The Book of Job. Avanesov develops somber chorale material shaded with microtones in a variation form that unfolds like accumulating incantations. The texture becomes more angular for a punctuated, rhythmic middle section before Avanesov returns to the opening chorale material, embellished with improvisatory figuration in the piano.

Ashot Zohrabyan’s poignant Novelette begins with a lengthy passage for string trio alone, as plaintive lines weave in between the three instruments. When the piano enters after three and a half minutes, it is nearly at the culmination of a long crescendo in the strings, driving the first section to a cadence over a sustained bass note. Antonio Lysy gives an impassioned performance of the significant cello part for the duration of the piece, leading the ensemble through deeply emotional material before a pleading high register solo by violinist Varty Manouelian brings the piece to a peaceful, resolved close.

In his A Fiery Flame, a Flaming Fire, Michel Petrossian explores the complicated questions surrounding identity in a globalized world. Also inspired by a Biblical passage (this time the famous text on the burning bush), Petrossian toys with fragments of Armenian folkloric music, particularly a traditional song, “Kars,” which was brought to a wider audience by jazz musician Tigran Hamasyan. Petrossian is alternatively deconstructive and transparent with his treatment of the folkloric material, resulting in a work that revels in shifts of expressive mood and texture, much like someone juggling a complex, multi-dimensional relationship to identity. A recurring, puppet-like theme in closely spaced intervals expresses the nervous transitions from one sense of self to another, while introspective moments capture the alienation of not belonging entirely in any one space.

Texts by Vahan Tekeyan (the “Prince of Armenian poetry”) are the foundation for Artashes Kartalyan’s Tekeyan Triptych, a three song set for mezzo-soprano and string quartet. The first poem, “Es Siretsi” (“I Have Loved”), is a paean to the depth of passionate love. Lush chords provide a pillow for a tender ritornello sung beautifully by Danielle Segen, and alternate with lighter, flowing passages for the five stanzas. The second song, “Papaq” (“A Wish”), is set as a gentle waltz, melodically reminiscent of Armenian traditional material but with a more wide ranging harmonic palette. The final song, “Hashvehardar” (“A Summary”) is a personal, spiritual reckoning, a poem that asks about the ultimate meaning of our lives and actions. The performances by Segen and the VEM Ensemble are polished, lyrical, and committed, infusing these evocative settings with intimacy and expression.

The recording shifts directions with Ashot Kartalyan’s Suite for Saxophone and Percussion. The opening movement is an insistent, ritualistic dance in shifting meters, with the soprano saxophone charming an unseen creature. Adding the dimension of pitched percussion, Kartalyan integrates a marimba into the second movement, a short three voiced fugue that slithers through chromatic lines. The third movement features more regular pulse driven music, settling into a groove with unison, syncopated hits between the instruments, followed by a contrasting section using vibraphone underneath lyrical passages in the saxophone, before a return to the opening material. In the fourth movement, Kartalyan features the pastel colors of sax and vibraphone in a sonic painting worthy of a film noire score. The final movement is a return to the non-pitched percussion of the opening, albeit with more vigor in the articulation of Armenian modal material in the saxophone.

“Modulation Necklace” concludes with selections from Artur Avanesov’s solo piano collection Feux Follets, which contains approximately seventy works. There is an improvisatory, searching quality to several of these pieces and Avanesov’s performances which underscores their expressive directness. His sources for material and inspiration range widely from Luciano Berio to medieval French song, Baroque harpsichord music to Armenian folk art and music.

Though he is only performing on the opening track, one senses Movses Pogossian’s understated artistry throughout this engaging collection. “Modulation Necklace” reveals a healthy Armenian contemporary musical community that testifies to the long and complicated history of this rich culture at the juncture of Europe and Central Asia.