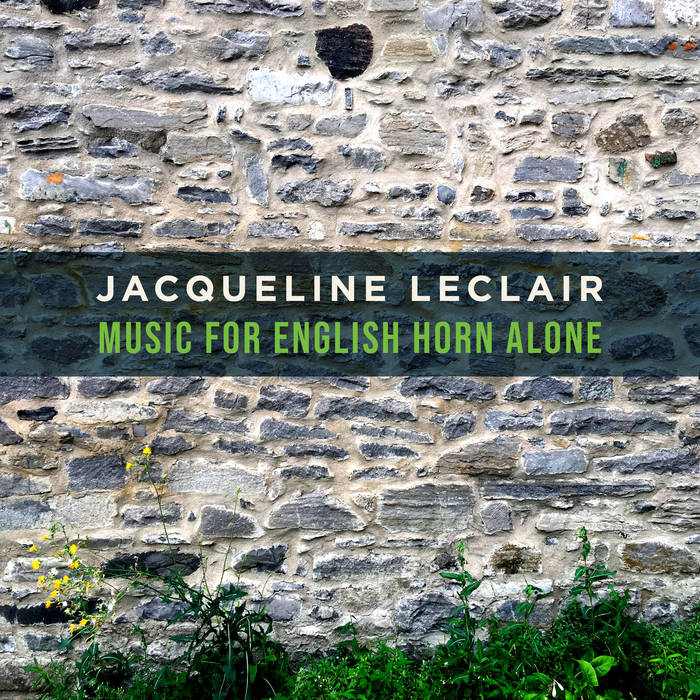 Oboist Jacqueline Leclair’s Music for English Horn Alone features several recent works for this characterful member of the double reed family, four of which are premieres. There is an appealing range of aesthetics represented by the music on this recording, from lyrical character pieces with various sources of inspiration by Hannah Kendall, Jenni Brandon, Meera Gudipati, and Lisa Bielawa to finely wrought modernist works by Faye-Ellen Silverman and Karola Obermüller, to an off-kilter exploration of extended technique by Cecilia Arditto. Leclair brings her virtuosity and interpretative expertise to all of these works, a testament to her many years experience at the forefront of new music performance.

Meera Gudipati’s Ashakiran (“Ray of Hope”) is grounded in Hindustani Indian classical music. Based on the morning raag Bhairavi, the work opens with an improvisatory passage introducing the pitch content and registral contours of the raag. Hints of rhythmic passagework are interspersed with lyrical explorations in this first section. The second section of the piece evokes the gat, a cyclic phrase that is embellished by the performer, featuring virtuosic material. Ashakiran closes with a short, meditative improvisation on raag Bhairavi, inviting the performer of the notated score to briefly inhabit the improvisatory source of its inspiration.

Hannah Kendall’s Joe is a musical interpretation of an award winning photographic portrait by Richard Boll. The photo, a prize winning work on display at London’s National Portrait Gallery, is of a shirtless man, wearing a few necklaces and sporting tattoos, and captured in a manner that suggests an itinerant lifestyle. Kendall’s setting vacillates between mournful, singing phrases and playful, dancelike fragments.

The tape part for Faye-Ellen Silverman’s Layered Lament was fashioned from pre-recorded string sounds, furnished by Vladimir Ussachevsky and realized at the University of Utah Electronic Studio. The expressive notion of “lament” pervades the piece, from the hauntingly opaque, “choral” quality of the opening, to the vocal urgency and elastic phrasing of the English horn gestures. After the introduction, the English horn has an extended solo exposition before the tape part provides an unsettling sonic environment that supports increased instrumental intensity.

Jenni Brandon’s In the City at Night depicts the unique, magical quality of the nocturnal urban environment. Delineated sections including “Sunset,” “City lights,” and “Quiet Streets,” Brandon captures several characters in the five and half minute work. After developing an evocative opening section featuring an ascending arpeggio figure, the material gradually glides into a repeated syncopated groove that is varied and embellished. A tender melody follows, before we hear the repeated groove again, before finally the ascending arpeggio returns to close the work.

Karola Obermüller’s different forms of phosphorus is a meditation on metamorphosis and life processes that occur at a geological pace, having profound impacts on life on earth. Key to the musical language of the piece is a rich vocabulary of multiphonics on the English horn, sonorities that Obermüller relishes and mines for deep expressive content. A unique feature of her treatment of these rarefied sonic gems is the various oscillations that happen within their sustained duration, whether it be an accelerating vibrato, trills, or exploring fine increments of microtonal gradation. Obermüller gradually introduces pointed, fragmentary gestures in between the verticalities, until the two textures become integrated in a quixotic, primordial dance which ultimately fades out into the distance.

Part of a series of fifteen short works for solo instruments, Lisa Bielawa’s Synopsis #10: I Know This Room So Well was written during a three year residency with the Boston Modern Opera Project. The subtitle refers to a character in an unfinished opera of hers who describes her intimate familiarity with her jail cell — “If in the dark a chair has moved, I can move around it. I know the room so well.” The piece begins with a lilting two note descending figure contrasted by a floating melody above. The consistent return to these two fragments of material, reordered and turned around, is reflective of some of the enforced familiarity to which the character alludes, or as Bielawa writes, “our various jails, virtual, and real.”

The final work on the album, Argentinian composer Cecilia Arditto’s Música invisible takes inspiration from the Queen of Heart’s famous line from Lewis Carroll’s Alice in Wonderland, “Off with his head!” Arditto writes a range of sounds that are made “over and through the instrument without using bocal or reed.” She establishes a series of clocklike percussive figures that are broken up by vocalizations and utterances, creating a primitive, slightly mad quality. The piece is a sort of anti-English horn English horn piece, and a clever and wry way of ending an album filled with such instrumental range.