by The Society for Electro-Acoustic Music in the United States 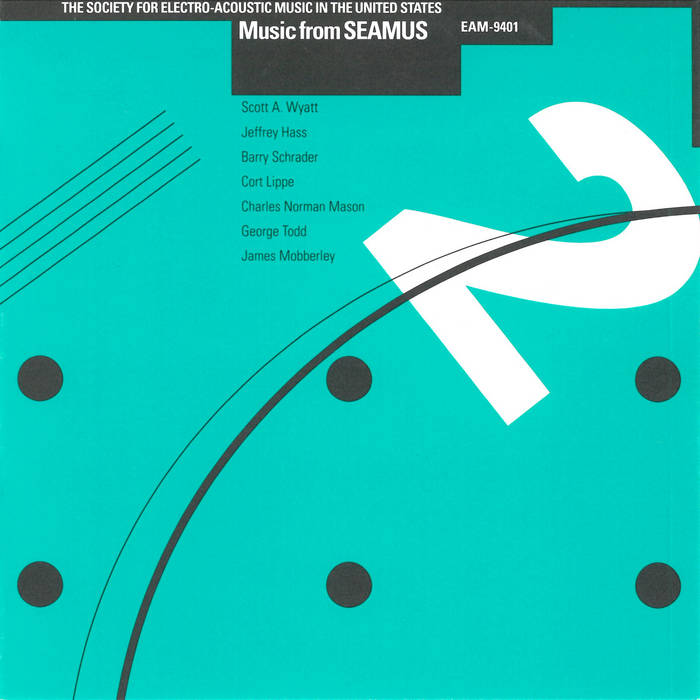 SEAMUS (Society for Electro-Acoustic Music in the United States) continues the release of their back catalog with Vol. 2 from 1993, featuring electronic and electroacoustic compositions from Scott A. Wyatt, Jeffrey Hass, Barry Schrader, Cort Lippe, Charles Norman Mason, George Todd, and James Mobberley.

The first piece by Scott A. Wyatt called Time Mark, for solo percussion and tape, features a wide range of percussion sounds, heard both in the live performance and on the pre-recorded electronic track. This piece, along with many others on the album, features the prominent use of spatialization and panning. The work begins with an electronic shaker, a motif throughout much of the piece, with swells of electronic sounds punctuated by percussion. In the middle, the percussionist takes on a quasi-soloist role on marimba, constantly rolling a slow-moving melody. Under the surface of this section, the electronics shape and color the marimba line to great effect. Following this, the piece breaks into a scherzo with the percussionist taking a background role to fascinating spatialized electronics.

Jeffrey Hass’ Liasons is for computer-generated tape, with all of the sounds being sampled from oboe key clicks and multiphonics. Liasons is in the form of a traditional theme and variations, differing in that each variation contains the same material as the theme, and features a different way of electronically processing that material. Hass uses pitch shifting, spatialized reverb, elimination of the initial attack sound of notes, and time stretching. Time stretching is especially used to highlight multiphonics from the oboe, allowing the listener to hear intricacies we miss when we hear multiphonics at normal speed. Multiphonics take on a more pronounced role as the piece develops, both by becoming less processed, and through their role as ambient background material in contrast to the active foreground.

Barry Schrader’s Barroco is for the extremely unusual combination of harpsichord and electronics, and is the second section of a two movement work for this duo called Excavations. This piece is in what Schrader calls “reverse entropy” form, meaning that fragments of material from the opening come back in bits and pieces before settling into less chaotic repetitions. The opening features chords alternating between harpsichord and electronics, with the timbral difference mimicking the sound of different stops pulled on an organ. These chords break into a quasi-style brisé texture, with the two instruments locked in pointillistic hocketing with increasing melodic imitation. Hints of Baroque music are heard in common cadential figures, though no actual quotes are used. Slowly and patiently, the texture grows in activity and density, leaving chaos behind and ending in settled, unison repetition.

Returning to unaccompanied electronics, Cort Lippe’s Paraptra is for computer-generated tape, with all material coming from processed harp and classical guitar sounds. The piece is in four distinct sections, and features a wide dynamic range throughout, frequency shifting, spatialization, harmonization, and time-stretching. The opening section offers hints of unprocessed plucked strings beneath ghostly ambient sounds before building to a strong climax, with intense panning of the sound used to build tension. The texture changes entirely for the second section, featuring pointillistic sounds on top of quiet ambient sounds, and as the section progresses the two soundworlds begin to coalesce. This transformed material, sharp pointillism dulled by ambient sounds, becomes the basis for the third section. The fourth and final section features similar material to the first and gradually fades away.

Charles Norman Mason’s Amalgam I is for oboe and computer-generated tape. The tape captures elements of the double-reed sound, which the oboe expands through multiphonics and microtones. Amalgam I begins with the tape and oboe playing rhythmically incisive material, which morphs into the oboe taking on a soloistic role. Underneath, the tape stealthily sneaks in to both imitate and color the oboe’s sound. The piece then moves into an imitative scherzo section, and ends with a reprise of the beginning material.

George Todd’s Wordscapes are a set of etudes where one or two spoken words are sampled, analyzed, and re-synthesized. In this case, the words “Word”, “Water”, and “Green Idea”, spoken by a female voice, are used in three distinct etudes. In the synthesization process, the sound of these words is divided into “frames”, each of which contains its own harmonic spectrum, and through its proximity to neighboring frames, creates a timbral spectrum as well. The sounds used, while in an entirely different stylistic world, sometimes resemble electronic sounds used by Stockhausen. In the first two etudes, “Word” and “Water”, there is no hint of hearing the words themselves. In “Green Idea”, it is at times possible to make out the two words. These three etudes showcase extremely imaginative ways of processing tiny sections of human speech, and using the material to create fascinating compositions.

The last piece of the album is James Mobberley’s CAUTION TO THE WINDS, with the title being an allusion to the abandon and visceral thrill found in both the piano and electronic repertories. As such, the piece reflects this spirit in its free, rhapsodic form. The tape sounds are derived solely from the piano itself, with the tape track often taking the form of an impossibly virtuosic pianist in duo with a pianist who is merely human. The pianist opens the piece with a flourish, which the tape immediately expands upon. From here, the piece is off to the races in a thrilling end to this album showcasing a sampling of the academic electronic music being written in 1993.

Remastered by Scott A. Wyatt at the University of Illinois Experimental Music Studios