Musicians from soundSCAPE: After the End

by Musicians from soundSCAPE 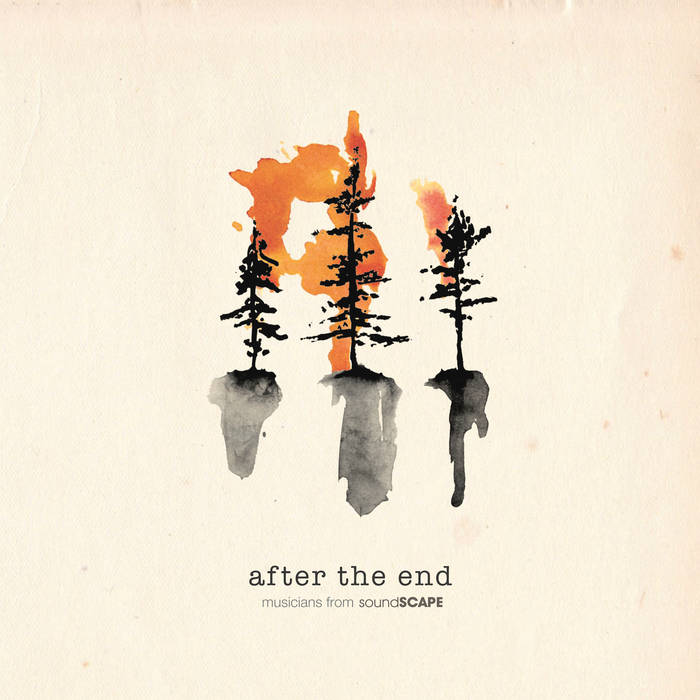 This second release on New Focus from the musicians from soundSCAPE highlights the cultivated programming of this Italian summer festival focusing on contemporary music. Two of the three works, by Jesse Jones and Ricardo Zohn-Muldoon, are narrative and text driven, while the third, by Carlos Sanchez-Gutierrez is inspired by visual art and the creation of musical systems. Throughout, the musicians from soundSCAPE perform with virtuosity and commitment, highlighting the richness of these scores, absent as they are of bombast and traces of stylistic agendas.

Jesse Jones’ After the End, performed here by soprano Tony Arnold, pianist Thomas Rosenkranz, and vibraphonist Aiyun Huang, sets a text by poet Jonathan Brent Butler that darkly predicts the end of the world, with a hint of optimism about what comes next. Bell-like vibraphone notes suggest droplets of sound trickling down after a deluge, as the soprano takes stock of the aftermath with long lines characterized by ascending leaps. The piano joins the vibraphone, as their composite chords word paint the “bright needle of the sparrow’s song.” Midway through the piece, the rhythm becomes more regular and insistent, as the text reflects on where the cataclysm started, after which the harmonies soften and become hopeful with the prospect of renewal.

Ricardo Zohn-Muldoon’s seven movement Flores de Viento III for soprano, percussion, flute (Lisa Cella) and violin (Mark Fewer) sets poetry based on the mythical figure Quetzalcóatl, a Pre-Hispanic Mesoamerican deity. The work focuses on a myth wherein a rival god Tezcatlipoca tricks Quetzalcóatl into drinking too much mezcal -- tragic consequences then ensue. George Crumb’s influence is heard in the ritualistic opening movement, with short rhythmic motives passed through the instrumental ensemble and a varied palette of vocal sounds. “Danza del Alba,” scored for solo violin and soprano, captures the coercive moment that Quetzalcóatl is tempted to imbibe with slithering lines and forceful double stops. A short instrumental interlude for violin and percussion provides a segue to the inebriated dance itself, “Danza Nocturna.” The effect of the mezcal on the deity seems to be somewhat muted, leading not to a cathartic frenzy, but instead to one of intoxicated wonder, as short fragmentary motives are passed through the ensemble, framed at the beginning and end by whispered text. A persistent pulse in the percussion frames “El rio pasa”, depicting the ceaseless march of time. “Danza del Fuego/Arrullo de Muerte” captures the dramatic moment that Quetzalcóatl, in his shame at the consequences of his irresponsible revelry, sacrifices himself in flames before his heart leaves his body to rise to the heavens, becoming the morning star. The most vigorous music of the piece captures the moment of self-immolation, giving way to an ethereal sustained texture that depicts Quetzalcóatl’s magical transition to immortality.

On this recording, Carlos Sanchez-Gutierrez’s Chance Forest Interludes for solo soprano are interwoven between movements of his eight movement percussion and piano work, Kikai no Mori [… Ex Machina II] (itself an adaptation of ...Ex Machina for marimba, piano, and symphony orchestra). In Kikai no Mori, Sanchez-Gutierrez reflects on the artwork of “kinetic” sculptors Arthur Ganson, Jean Tinguely, and Iván Puig, creating what he calls “technological devices” -- rhythmic or structural mechanisms that integrate an element of “precariousness.” The first, “Tinguely,” establishes a repeated motive, akin to a delay effect articulated acoustically, before rogue elements begin to infect its regularity. “Genghis” features pointillistic lines heard in rhythmic unison, widely separated registrally in octaves on the keyboard. “Machine with Chinese Fan” flirts with polyrhythm, never quite settling into a consistent statement of the 4:3 superimposition it obliquely suggests in its hocketed attacks. “Mandala Tequila” moves more slowly, with sustained accented notes creating a structural line that guides the ear through the movement over the percolating activity beneath. As with the other “machines” Sanchez-Gutierrez erects, this one eventually seems to interrupt its own internal logic, as a rolled chord crescendos into a clocklike texture to end the movement. “Machine with Wishbone” begins where “Mandala” left off, with a drier less sustained texture, while “Twittering Machine” features more extroverted music --- dramatic bass drum hits followed by poignant fermatas prepare a closing section that sends the pianist into the high register for a final moto perpetuo gesture. “Machine with Artichoke Petal” establishes a texture of music box like statements reminiscent of Messiaen, followed by rolled tremolos on vibraphone and marimba. After annunciatory high register chords, Sanchez-Gutierrez’s doubles the tempo for a final statement. “Things that Go” builds into a constant stream of accented pitches in quasi-unison between the two instruments, before they split, alternately pitting tumbling triplets in the marimba and punctuated chords in the piano against rumbling low register piano notes. The consistent texture continues to disintegrate before a startling final chord.

Tony Arnold’s performance of the interstitial Chance Forest Interludes lends a narrative frame, balancing the intricate ensemble movements with solo vocal music that covers territory from the conceptual (such as the modem connectivity sounds in “Genghis”) to the coquettish “Poema” to the flowing in “From Point to Line” and “Follow the Feeling.” Arnold and her colleagues from the soundSCAPE festival champion these pieces with insight, commitment, and sensitivity, and the works are sure to find their place in the repertoire of many ensembles.