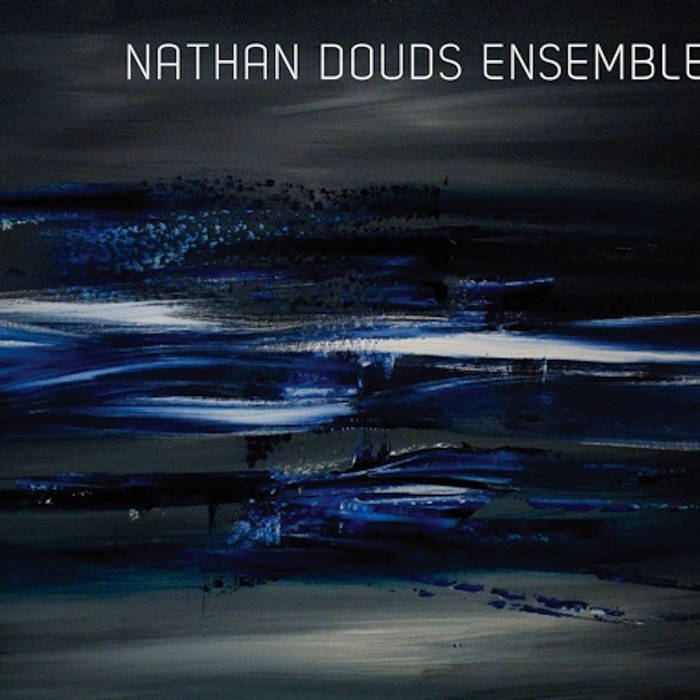 Formed in 2010, the Nathan Douds Ensemble features six musicians with diverse musical backgrounds and career paths, a prime factor that allows this group to remain as flexible as it is. The group has given recitals/concerts, clinics, and masterclasses at various academic institutions, including Youngstown State University, Slippery Rock University, Denison University, University of Southern Illinois, Chicago Academy of the Arts, among others.
In this, their first self-titled album, the group performs seven of Douds' original works. Recorded at the renowned Red Rock Recording studio, the album showcases the wide dynamic and stylistic range of the group.
The opening track of the album, A B Coda, is a through-composed piece with sections of gradual motivic development interrupted by abrupt thematic shifts. It features a patient opening, alternating between composed and improvised ideas. Douds draws on some unlikely sources for inspiration -- the second track of the album, 528, was named after an amazingly difficult road in Pennsylvania, capturing the experience of traveling this road by constantly increasing and decreasing in tempo, all while blending musical elements of Irish music, rock, and jazz. Also referencing streets from Douds’ past, Gypsy Lane features saxophonist Jason Kush and travels through territory that is vaguely reminiscent of Chick Corea's Electric Band work before disintegrating into an otherworldly free section with snippets of effects and live electronic sounds as accompaniment to Kush's poignant saxophone and wordless vocals by Justin Endler. Endler's haunting vocal returns in a prominent role in After Long Silence, a two part composition which sets a William Butler Yeats poem in the opening section before featuring pianist Dan Murphy in beautiful lines of implied counterpoint and spacious harmonies. Guitarist Daniel Bruce's timbal sensitivity and elegant lines and bassist Kurt Kotheimer's angular grooves are featured on the sixth track, Zaza's, named after a Cleveland, Ohio venue.