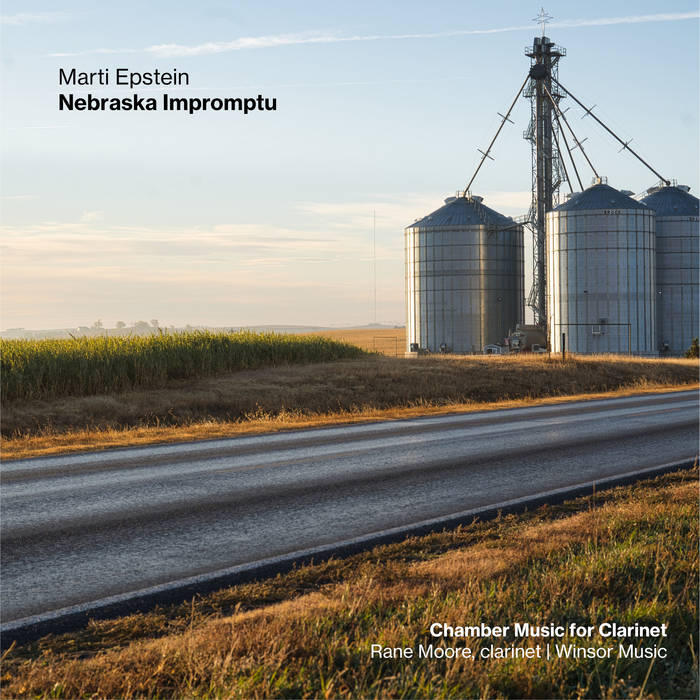 Boston based composer Marti Epstein releases a collection of her chamber music including clarinet, featuring Rane Moore and the Winsor Music ensemble. Epstein's music is shaped in equal measure by modern icons Webern, Feldman, and Takemitsu, as it is by the expansive landscape of the American plains and her upbringing in Nebraska.

Marti Epstein’s music makes space for contemplation — of gestures, components of the musical fabric, harmonies, and timbres. Influenced but not at all restricted by alternate approaches to structure in the music of Morton Feldman, Toru Takemitsu, and Anton Webern, Epstein patiently examines musical ideas, deconstructing them as a way to consider them from all angles. This collection of music highlights instrumentations that include clarinet, and also shines light on Epstein’s penchant for expansive textures that are shaped by her childhood in the Great Plains. Nebraska Impromptu features Boston based Winsor Music and their clarinetist Rane Moore.

The recording opens with Oil & Sugar, an impressionistic quartet for clarinet, flute, violin, and piano that is inspired by a video by French conceptual artist Kader Attia. In the video, motor oil is poured over large blocks of sugar cubes. In the video, the process is counter-intuitively depicted with graceful sensuality, mirrored in Epstein’s flowing score, despite the resultant chemical destruction that the oil wreaks on the sugar. Watery piano chords support interwoven melodic figures that form momentary harmonic areas.

In its opening section, Liquid, Fragile for clarinet and string trio presents lyrical, Americana fragments separated by extended rests. By interrupting these poignant gestures, Epstein establishes an expressive expectation and consistently breaks it, as if to pause and consider the emotional association of the Coplandesque music from a momentary distance. Preserving the construct of presenting islands of material separated by rests, Epstein turns to abstract gestures midway through the piece, focusing on ascending glissandi, swelled chords, and later pizzicati.

The clarinet is most clearly in the fore in Nebraska Impromptu, a duo between Moore and pianist Donald Berman. The piano plays pastel voicings in the high register supported by low bass notes, while the clarinet occupies the middle register on its own. Epstein develops a symbiotic relationship between the two instruments — the clarinet crescendos through sustained values as the piano sound decays. A quasi-minimalist oscillating figure in rhythmic unison closes the work with nostalgic simplicity.

Komorebi, composed in 2017 for Winsor Music, turns small motifs around and around, shifting phrase syntax and internal instrumentation to bring out shades of quasi-semantic expression. As with much of the music on this recording, Epstein’s harmonic rhythm is fairly slow, giving time to inhabit the harmonies and hear how subtle adjustments to the counterpoint illuminate them.

The longest and earliest work on the recording is See Even Night (2001) for clarinet, viola, and piano. Feldman’s influence is apparent here, with an intensified microscopic lens on elements of the texture and their gradual evolution. Larger contrasts happen on a sectional level, with new sections signaled by shifts in dynamic and timbre. The result is a large-scale narrative that results from the relationships between large shapes, animated by the percolating aliveness contained within their minute variations.

Marti Epstein’s approach to motivic and structural development fits perfectly with her affinity for a spacious expressive world that captures the landscape of the American Plains. In Epstein’s music we are reminded of the vibrant, dynamic life that lives inside stillness, and the rewards that come with a quieter contemplation of its mystery.

Komorebi, See Even Night, and Liquid, Fragile were recorded at Mechanics Hall in Worcester, Massachusetts