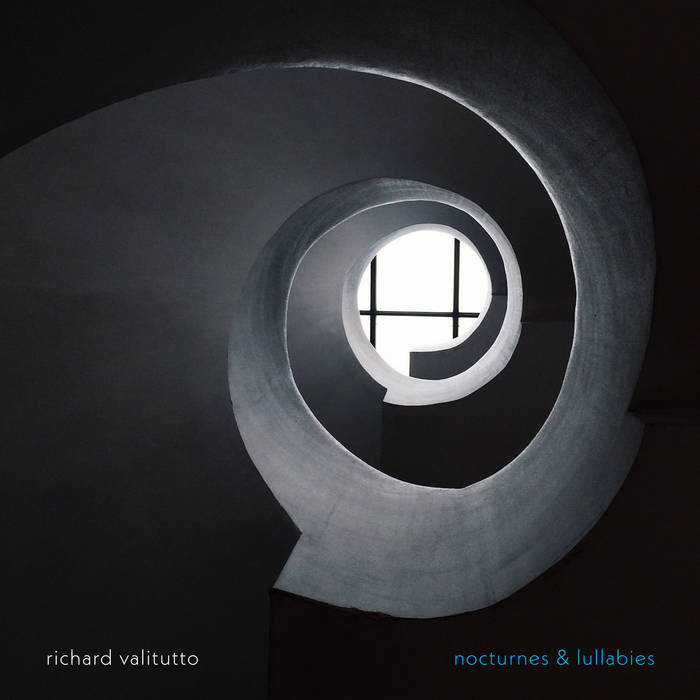 On “nocturnes & lullabies,” pianist Richard Valitutto explores repertoire that engages with underlying themes of the night, sleep, life/death and consciousness/unconsciousness. He was interested in cultivating an aesthetic of “anti-virtuosity” during the period of gestation for many of these pieces (seven of which are heard here in their premiere recordings), a pursuit that is borne out in some fashion or another in the ways the works subvert conventional piano writing and often manifest experimentalist approaches.

Nicholas Deyoe’s NCTRN opens the recording with a punctuated chord cluster that immediately leaves only its resonance behind, deconstructing one of the piano’s cherished characteristics, its sustain. Ominous, dense middle register chords fill the texture, accompanied by unsettling percussive knocks from the instrument’s topmost notes which are muted by a putty preparation. Accented sonorities return periodically to assert a sense of anxiety and suspense. As the work progresses, Deyoe adds more lyrical passagework to the texture, expands the registral range, and introduces a persistent percussive rattle, but an existential sense of dread lingers over the entire work.

Rebecca Saunders’ shadow is an exhaustive study of the piano’s capacity for sympathetic resonance. She composes these acoustic “shadows” through punctuated chord clusters and subsequent filtering of the resonant pitches trailing behind with silent key depressions and releases, coupled with deft manipulations of the middle pedal. The aesthetic consequence of this exploration is a texture where strident chords are juxtaposed with sensual resonance and lyrically sustained passages. The virtuosity inherent within is not of a relentless motoric quality, but in the discipline of the razor- sharp shifts in character.

The central part of the album consists of four shorter character studies that focus the listening experience on their rarefied textures through limited musical materials:

Marc Sabat’s Nocturne is dedicated to a composer whose music is heard later in the program, Linda Catlin Smith. He writes that the piece is a “study of metric modulations in a slow tempo.” Using polyrhythms as transitional elements much in the same way as a pivot chord might facilitate a harmonic modulation, Sabat’s work is a minimalist contemplation of subtly shifting tempo relationships.

Maura Capuzzo integrates two extended techniques that shape the sound world of the brief work, Portami con te nel mattino vivace — the use of the pedal mechanism as a percussive technique, and the strumming of the strings inside the piano (à la Henry Cowell). Capuzzo establishes a wide expressive and dynamic range encompassing these delicate effects alongside gentle, sustained lines and short, forceful bass notes and middle register chords.

Plainsound Lullaby by Wolfgang von Schweinitz is built on a unique timbral restriction; nearly all of the sounds are accented multiphonics played on the bass strings. A ritualistic, ceremonial effect is produced, tolling bells to accompany an invisible dance.

Linda Catlin Smith’s A Nocturne builds a narrative primarily from a polytonal collection of major and minor triads often heard in the extreme registers of instrument. Repetition with subtle variations plays an important role in the work, as the timing and placement of reiterated musical ideas takes on semantic weight as Smith slowly builds a rhetorical argument.

The final work on the album is Deyoe’s Lullaby 2, part of a series of lullabies, each written for a different instrumentation. With quotations of music by the metal band Death and from the slow movement of Schubert’s B-flat Sonata, sometimes referred to as a Totenwiegenlied or “lullaby of death,” Deyoe seems to suggest that the sleep his work intends to lull one into might be of the terminal variety. Opening with a tremolo on the piano’s highest B, Deyoe slowly adds new elements to the texture, first a sustained chord, then jaunty grace note figures surrounding the tremolo. Echoing his work earlier on the recording, NCTRN, we hear knocks on the fallboard of the piano as the ominous middle register chords assume a predominant role. Near the ten and half minute mark, the tremolo figure from the opening is restated in the low register, leading into a dialogue between more dynamic percussion figures, the original tremolo, and towering chords. After the piece’s cataclysmic climax, Schubert’s theme emerges from the fallout, both mournful and nostalgic, but Deyoe leaves the harmonic progression unresolved at the close of the piece — a composed stutter like the skipping of a turntable’s needle — ending the album with the lingering unanswered questions with which it began.

Valitutto has curated a profound programmatic journey with this collection, deemphasizing conventional piano virtuosity in favor of experimental approaches to the instrument, which he handles with powerful command and expressive depth. “nocturnes & lullabies” is a deeply Romantic statement crafted from modern materials, a grappling with the edges of mortality as heard through the intensely personal sound world of the piano.

Mixed, and Mastered by Nick Tipp for Soniferous Studios

Edited by Nicholas Deyoe, with additional editing by Marc Sabat on his composition