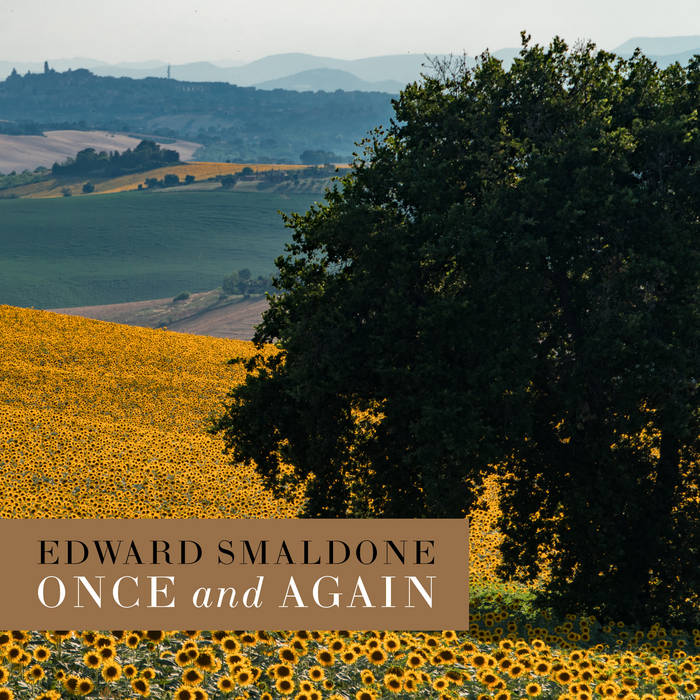 Edward Smaldone’s compilation of chamber music “Once and Again” encapsulates consistent priorities in his work over five pieces for diverse instrumentations. There is a formalist’s bent in these pieces, presenting the pitch and motivic material for the music within the opening measures, and reflecting a large-scale architecture that is teleological despite intentionally built-in asymmetries. The harmonic language is richly chromatic, but achieves a sense of forward direction with clearly articulated goals. The rhythmic approach prioritizes metric organization, and relies frequently on dance rhythms. The result is an attractive blend of control and freedom, indicative of an experienced compositional hand that creates musical systems that generate their own germane material.

The opening work, Cantare di Amore, is written for soprano, flute, and harp, and heard here in a performance by Tony Arnold, Tara Helen O’Connor, and June Han, respectively. Setting Italian texts already used by Monteverdi in his Madrigals, Smaldone uses lyricism and the lush instrumentation to conjure love in all of its guises. The opening movement, “Longe date, cor mio,” features flowing arpeggios in the harp underneath interwoven, fluid passages in flute and soprano. “Piagn'e sospira” is more somber, unfolding in a more rhythmically free setting, culminating at one point in sharply articulated harp glissandi played with two plectrums, combined with flute flutter-tongue techniques, creating a dramatically expressive gesture. The final song in the set, “Darà la notte il sol lume alla terra,” begins with an exotic, impressionistic passage in flute and harp before leading into swooping, melismatic lines in the soprano part.

Smaldone cites the influence of George Perle’s Sonata a quattro on his Double Duo, both written for the same instrumentation of flute, clarinet, violin, and cello. Written initially at the completion of his PhD work before a revision many years later, the aesthetics underlying Double Duo were formative for Smaldone’s subsequent work. The piece opens with an easy groove punctuated by accented chords that are connected by slithering lines and cello pizzicati. A slow, mournful section follows, with instruments taking turns sounding the primary melodic line. Smaldone then combines these two themes and energies and presents them integrated together in development and recapitulation sections.

Letters from Home is a contrast on several levels to Cantare di Amore. The letters, which Smaldone discovered in his house in the early 1990’s, are in English and use vernacular language between women of different ages and Mrs. P.H. Andrews, the principal character of the cycle. The opening song, “Mrs. P.H. Andrews,” contains playful musical dialogue between the flute and clarinet, while soprano Susan Narucki sets the scene for the cycle, relaying the quotidian information of Ms. Andrews address, and her penchant for correspondence. “Your Loving Zola” sets a letter from Andrews’ niece describing news of a sick child. Swelling chords in the winds surround floating arpeggios in the piano, as the soprano builds to the more difficult health news, delivered in dramatic, parlando style. “Dear Aunt Lou” is from another niece, on the occasion of her graduation, with her thanks for the gift delivered in several playful phrases, each turning around the sentiment in terms of contour, word scanning, and register. “Thank you Luther” investigates Mrs. Andrews spending in a difficult economic moment, on shoes and a piano tuning no less. Smaldone’s saucy setting is reminiscent of Bernstein’s deft navigation of jazz and musical theatre idioms in West Side Story. “Dear Sister” comes from Andrews’ sister Ada, imparting an update on her life. Smaldone shifts the character of the music to support the meandering quality of the letter. The final song is a reprise of the first, returning to the vocal material midway through the text. On the whole the songs evoke the deep emotion of family, communication, and the struggles of women in the mid-20th Century.

Duke/Monk, originally for flute and piano, was inspired by the Duke Ellington composition Come Sunday and the Thelonius Monk composition Well You Needn’t, respectively. Despite clear inspiration from the jazz tradition, Smaldone’s approach to organization of material is consistent with the other works on the recording, driven by through-compositional craft and the implication of improvisation. “Duke” is rhapsodic, with Charles Neidich’s clarinet dexterously singing through elegant harmonies on Morey Ritt’s piano, projecting a cultivated demeanor throughout. As befits its dedicatee, “Monk” is more angular and jagged, with piano interjections and imitative passages between the two instruments. Smaldone captures the musical personas of these iconic artists, Duke as the consummate bandleader-composer-impresario and Monk as the impenetrable artist-genius.

The final work on the recording, Sinfonia, is for string orchestra though originally existed as the third movement of his second String Quartet. We hear many of the characteristics in Smaldone’s other works here, an affinity for jazz influenced gestures, a reliance on dance rhythms as a springboard for motivic development, and a taut approach to form. To the extent that Sinfonia maps Smaldone’s palette onto larger forces, it’s a fitting culmination of the works on this album. Indeed, despite the varied forces throughout this collection, and distinct musical materials of each work, there is a unified compositional approach that speaks with a voice that seeks order, emotion and communication in equal measures.