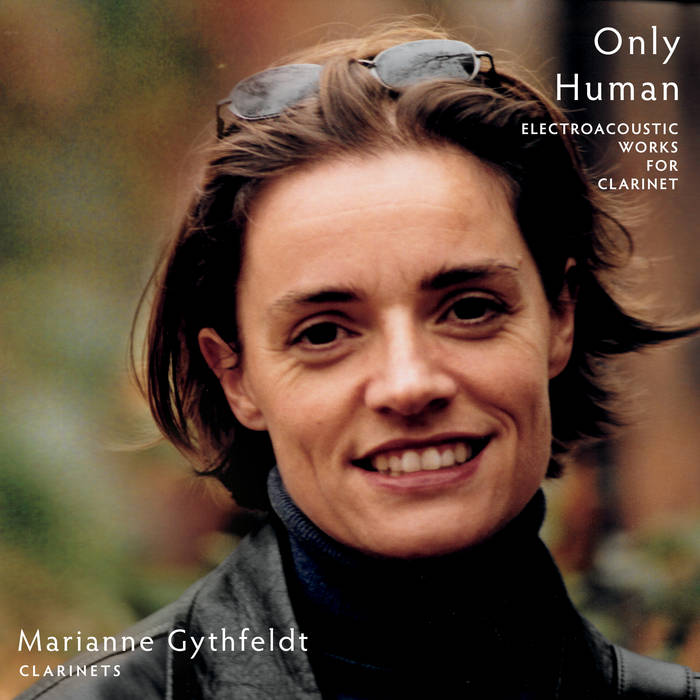 “Only Human” chronicles several electro-acoustic works written for clarinetist Marianne Gythfeldt that encapsulate the dynamism and variety that exists within the genre. The electro-acoustic format inevitably engages with questions of technology’s role in relation to the live performer, as well as contextualizes different degrees of interdependency of musical lines versus hierarchy of accompanimental versus soloistic roles. John Link’s title track engages with these issues directly, putting Gythfeldt’s live clarinet directly in dialogue with pre-recorded, manipulated samples of her playing. The title is a pun of sorts - Link’s treatment of the electronics (which is not processed aside from volume adjustments and panning) is such that we often cannot distinguish between which sounds are “only human” and which are “more than human”, and yet, it alludes to the fact that all the sound are indeed generated in a pure sense from a human source. Link’s piece is the perfect opener to a collection that proceeds to take a Davidovskian model as its starting point, exploring the subtle aesthetic implications of changing parameters in this delicate format.

Mikel Kuehn’s Rite of Passage uses live electronics, and takes its title from Stravinsky’s famous bass clarinet passage in Rite of Spring. Using several different styles of live processing, Kuehn builds a sonic world that takes Gythfeldt’s live playing and creates an enveloping halo around it as it explores the subtleties of the deconstructed source material.

David Taddie refers to a slang Big Band era term for clarinet in the title of his work, Licorice Stick Groove. Written as an homage to Benny Goodman, the electronic part in Licorice Stick Groove is timbrally distinct from the live clarinet, despite being manipulations of pre-recorded clarinet samples. A syncopated middle section echoes Goodman’s rhythmically inventive playing, if inhabiting a somewhat more futuristic sonic landscape.

Elizabeth Hoffman’s And when white moths were on the wing takes its inspiration from a Yeats poem. Hoffman’s electronics process the live performer’s signal live, partially through pre-determined algorithms but also by the composer as she adjusts the processing in real time. The result is the most exploratory and improvisational music on this recording, as Hoffman built an environment to facilitate her ongoing collaborator relationship with Gythfeldt.

Little History of Photography by Eric Lyon is a commentary on the similarity between the art of photography and some of the characteristics of the live electronic format. By taking “snapshots” of passing moments of Gythfeldt’s performance of this virtuosic part and processing those short excerpts, Lyon effectively turns the microphone into a sonic camera, documenting ephemeral events and magnifying them and transforming the relationship between performer and microphone.

Robert Morris describes his work On the Go as a “concerto for clarinet and virtual orchestra.” Unlike the other fixed media pieces on this program, Morris intentionally steered clear of using clarinet samples for his electronic part, drawing a stronger conceptual distinction between the role of live performer and pre-recorded music. As such, the work unfolds along lines more typical of a Romantic concerto, with a live protagonist driving the narrative, resisting pressure to relinquish her individuality in the face of the powerful multitudes. Morris’ work brings this recording full circle in a reverse evolution of sorts, ending with a piece that looks back towards traditional models even as it uses technology to generate its materials.

Gythfeldt’s deft navigation of these varied electro-acoustic scenarios and her virtuosity and musicianship shine throughout this collection of works that hopefully find their way into the repertoire of many other performing clarinetists.

Support for this project was provided by a PSC-CUNY Award, jointly funded by The Professional Staff Congress and The City University of New York