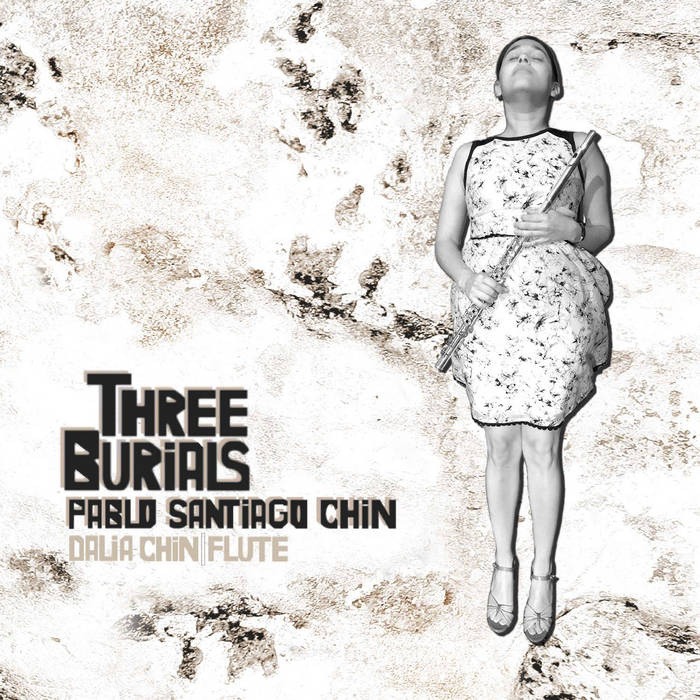 On “Three Burials,” Pablo Santiago Chin merges several aspects of his creative process to create an immersive, sensual recording chronicling his music for the flute, and featuring his sister and fellow member of Chicago based ensemble Fonema Consort, flutist Dalia Chin. The centerpiece of the program is the title work itself, a three movement piece that includes movements that can be heard either in solo versions, as they open and close the recording, or in ensemble settings, as they are heard in tracks 4-6. The material in Three Burials is generated from a transcription of Peruvian indigenous flute music to the modern flute. Pablo asked Dalia to transcribe this material in a natural and non-literal way to the modern flute, and then subject it to further manipulation and distortion, resulting in the multiphonics laden material that can be heard in the opening solo flute track. In the ensemble setting of Three Burials, the insistent, almost desperate quality of the quasi vertical flute sonorities manifests itself in prismatic textures spread through the ensemble, as guitar and piano punctuate the texture with percussive snaps, plucks, and creaks, and cello and double bass offer sighing glissandi and grinding dissonances. The second movement of the ensemble work is without flute, and yet echoes the searching quality of the solo version, as it circles around poignant central pitches. In the final movement of the quintet version, near the two minute mark, we hear the guitar suddenly intoning a familiar melancholy chord progression, a quote in fact from Ravel’s famous Pavane pour une infante defunte, while the flute continues to play anguished overblown passages. It is a remarkable moment for how naturally the tonal chords fit into the gestural, non-harmonic context, but not surprising as Chin’s expressive vocabulary is in fact often romantic and elegiac, despite the contemporary materials and sound vocabulary. In the Form of a Shell for orchestra and flute soloist gives us an opportunity to hear Chin’s deft orchestrational hand, as a trajectory from dense and active to sparse and static in the flute part is reversed in the orchestra, suggesting a slow burial of the soloist by the encroaching mass of the ensemble. Inside the Shell also engages with spacialization concerns in live performance, as the orchestra is arranged in spirals around the soloist, reflecting the organization of the orchestration through the piece. Libros de Marc and Inside the Shell I and II are solo pieces both born out of the material for the larger flute and orchestra work, Inside the Shell, reasserting the internal links between the generative process that connects many of the pieces on this recording. Como la leyenda de Ixquiq was originally written for the flute duo of Claire Chase and Eric Lamb from the International Contemporary Ensemble, and echoes Chin’s interest in spacialized performance. As the register of the individual parts expands over the course of the work, the performers spread away from each other to the edges of the stage, mirroring the expansion of the pitch range in their physical proximity to each other. On “Three Burials”, we hear Pablo Santiago Chin’s rich sense of color, the depth of his interest in unique and probing collaborative processes, and a powerfully emotional musical voice that speaks through disembodied extended techniques as clearly as through quotes from the traditional repertoire. Dalia Chin’s performance is virtuosic and deeply felt throughout, making this album a special one both for its familial collaboration and for the artistic commitment it displays.

Pablo Santiago Chin’s recent works draw inspiration from the narratives of film and literature, phonetic structures from texts, and the possible dramatic implications of these sources. His music has been performed in North, Central and South America, Israel, Hong Kong and in Europe. Chin has been commissioned by Ensemble Recherche, International Contemporary Ensemble (ICE), Ryan Muncy and Sean Patayanikorn, the Latino Music Festival of Chicago and Ensemble Dal Niente. His works have also been performed by Ostravská Banda, Donatienne Michel-Dansaq, Pierre-Stéphane Meugé, Marino Formenti, Gan Lev and Marcus Weiss. Chin is Artistic Director of Fonema Consort and teaches at Drew University in New Jersey.

Dalia Chin, Costa Rican flutist based in Chicago dedicates a large part of her artistic work to expand the possibilities and contemporary repertoire for the flute. She has worked closely with renown composers like Julio Estrada, James Dillon and Mesias Maiguashca, and has premiered works by emerging composers like Joan Arnau Pàmies, Francisco Castillo Trigueros, Amadeus Regucera and Dai Fujikura. Besides being a member of the Chicago Composers Orchestra (CCO) and the What is Noise Ensemble, Chin is a founding member of Fonema Consort. Chin has participated in important festivals in the USA and Mexico, including the Ear Taxi Festival, Frequency Festival, Latino Music Festival of Chicago, Omaha Under the Radar, Permutations Series, Visiones Sonoras and Festival Internacional Chihuahua.